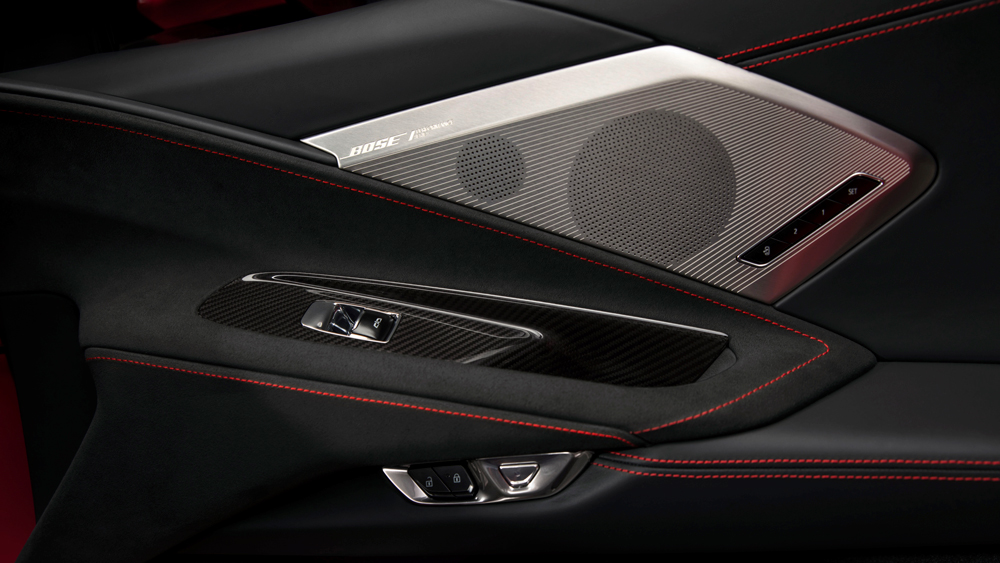 Corvettes and V8 soundtracks have gone hand-in-hand since 1955. Numerous musical genres have fallen victim to the flow and ebb of fashion in 64 years, but the symphony of eight cylinders firing at full chat seems like the kind of melodiousness that will never go out of style.

The next-generation 2020 Chevrolet Corvette continues the tradition of wrapping a lightweight body around a muscular V8, albeit this time with the engine sitting amidships. In a vehicle configured as such, even music lovers would survive without a stereo, but why not have your cake and eat it, too?

That’s where the Corvette‘s new Bose Performance Series audio system comes in. Sometimes you want your favorite tunes (fashionable or not) to sing in accord with the motor’s melodies. Crank the volume knob, and the eighth-gen Corvette will be able to rise to the occasion better than ever before.

The available premium audio system features 14 speakers (three atop the dash, five in each door and one behind/between the occupants). According to Bose, that’s the most speakers the brand has ever offered inside a two-seater. The company says the 2020 Corvette will boast the “loudest — yet clearest — Bose audio experience ever in a two-seat coupe cabin.”

“Moving to a mid-engine design doesn’t necessarily impact the number of speakers required,” says Mark Armitage, lead acoustic systems engineer for Bose audio in the 2020 Corvette Stingray. “Our primary objective was to work closely with Chevrolet to deliver the best possible audio experience for this particular vehicle, using advanced signal processing technology and tuning tools. As it turned out, 14 speakers is the right number for us to achieve our goals.”

Two of those speakers are 10-inch subwoofers—one per door. The woofers actually use their respective doors as giant bass enclosures “with a ported opening at the bottom of each door,” says Armitage, adding that Bose spent three years developing the new Corvette’s Performance Series system. “Our collaborative work with the Corvette team began more than a year before prototype vehicles were built,” he states.

The Bose Performance Series for the 2020 Corvette.  Photo: Courtesy of Bose.

Bose has been engineering bespoke, factory-equipped audio systems for the Corvette since the beginning of the sports car’s fourth generation in 1984. Much like how the Corvette’s on-road performance has taken a leap over the past 35 years, so has its in-cabin audio, according to Armitage.

“Since we developed the Bose system for the 1984 C4 Corvette–which was the industry’s first premium-branded sound system for a sports car–the sophistication of tuning and signal processing has matured significantly,” says the engineer. “We can do so much more today in terms of placing the sound stage, creating a surround-sound environment, and increasing the level of musical clarity and precision compared to our early days of system development.”

The interior of the 2020 Corvette Stingray.  Photo: Courtesy of Chevrolet.

We can’t wait to hear the latest iteration of Bose premium audio in the new Corvette Stingray. The 2020 Corvette. at its sub-$60,000 base price, will come with a 10-speaker Bose system as standard. Chevrolet will announce the cost of the upgraded 14-speaker Performance Series audio system closer to when the next-gen Corvette hits dealerships sometime early next year.