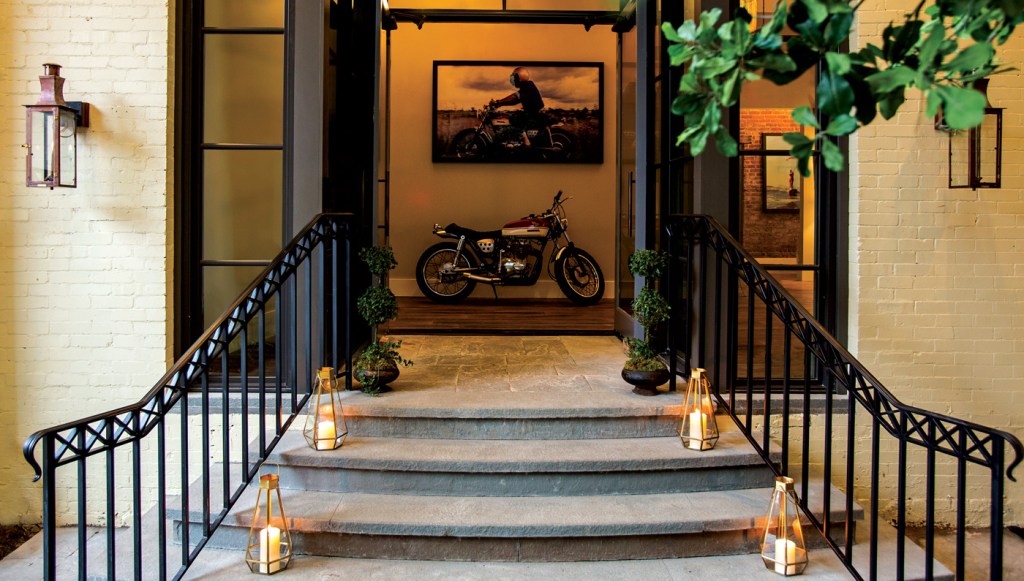 You can’t miss the motorcycle photo at the Restoration, a boutique hotel in Charleston, S.C., that reopened a year ago after a $27 million transformation. It stretches across the wall opposite an entrance and shows a stripped-down 1976 Honda CJ360 customized with an up-swooping Yamaha seat, chrome fenders, and handlebars that are lower than the model’s original ones. The rider is wearing leather oxfords, no socks, blue jeans rolled up above his ankles, and a bow tie. He’s on a dirt road passing through a meadow, on his way to a night on the town—thus the dress shoes and neckwear.

If the picture doesn’t stop you, the real-life version of the motorcycle will. It sits gleaming below the artwork, as if sprung free from the frame. Rugged yet stylish, it invites hotel guests to pause and perhaps entertain their own biker fantasies.

Sometimes Ivan Remus shows up too. He’s the guy in the picture, and that’s his bike—at least it was until one day last year when the hotel’s creative director, Cory Ingram, saw the photo and contacted him. Ingram asked if Remus would sell him the bike and also become the design consultant and builder for the Restoration’s Open Road project (therestorationhotel.com). It’s a program that offers guests the chance to conceive and commission a custom-built motorcycle.

The second question, though odd in the context of a boutique hotel, was easy for Remus. He had been building custom bikes for 15 years and was certainly qualified for the role. As for the first question? He was reluctant to part with his Honda. “I was hesitant,” he says, “but at the same time honored. It’s bittersweet.”

Remus, the Honda, and the photo of them are part of a bigger picture for the hotel.

“I had this aha moment,” says Ingram, recalling the first time he saw the photo. “It reflects the DNA I wanted to convey—this feeling of freedom and Americana.” His hope was that the hotel would do more than just provide travelers to Charleston with a posh place to stay; he wanted it to celebrate local artists and contribute to a greater sense of community in the city. This led to the creation of the hotel’s artist-in-residence program, which began with the Charleston-based photographer Ben Gately Williams (gately​wil​liams.com). His works are displayed throughout the property, none more prominently than the photo of Remus on the Honda.

Giving guests the opportunity to work with a local craftsman to customize their own vintage bikes also fit Ingram’s vision for the hotel. Remus charges a $500 consultation fee, which is applied to the cost of the motorcycle if the guest proceeds with the project. He secures the base bike and the parts to customize it and completes the project in 4 to 9 months. The final price depends on the costs of the donor bike and parts and the amount of labor required.

Remus, who grew up in Puerto Rico and moved to Charleston with his family in 1990 when he was 12, works at a small studio downtown. Elvis and James Brown dominate the studio’s playlist. For one rider, he made over a 1970s-era Honda CL350 so that it’s better suited to the commute to and from work. He stripped the red paint off the fuel tank and repainted it charcoal, to match the owner’s Audi. He also swapped out the original seat with a more streamlined café-racer-style saddle. The bike became more elegant and more practical, Remus says: “It’s decluttered, and there’s now less weight, which frees up horsepower.”

Remus’s current ride is another customized vintage Honda, a 1973 CB500 Four K2 that he has painted bright green. “I made everything else smaller so the frame and engine stand out,” he says.

He still misses the Honda in the photo, but he knows it has found a good home at the Restoration, where it’s the focal point of the hotel’s Culture Library. There it keeps company with art books curated in partnership with Assouline Publishing, plush leather couches, and fur throw pillows. “His bikes are neat and put together,” says Remus’s friend and fellow rider Nicholas Boudreau. “They’re just as good with beer and burgers as they are with wine and cheese.”