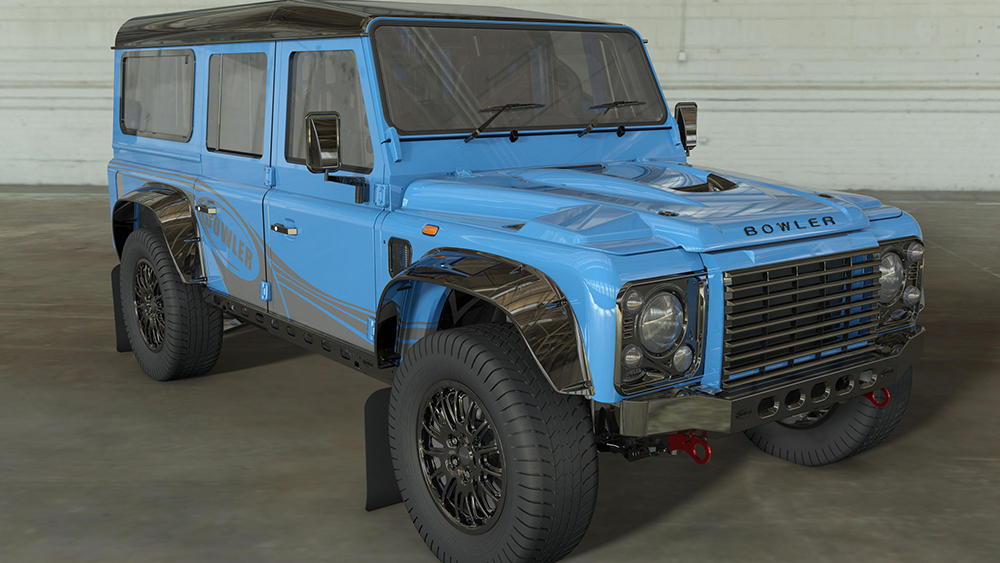 Bowler is doubling down on grunt and grit with its new Defender riff. The UK outfit, which has been building off-road racers for the past 35 years, has treated the iconic ride to a new supercharged V-8 and rally raid chassis to make it tough enough for any type of terrain.

The brute, currently codenamed CSP 575, is the first new project to come out of Bowler since Jaguar Land Rover acquired it in December 2019. The four-door sports the signature boxy silhouette of the original Land Rover Defender 110 Station Wagon and features aluminum bodywork coated in bright blue paint. As its moniker suggests, it takes Bowler’s high-strength 575PS rolling steel chassis as its base, which is routinely used in its rugged rally raid cars. It also features a full safety cage to make you feel like a real Dakar pro.

Under the hood, the four-by-four will be fitted with a supercharged V-8 engine that’s also featured in the Range Rover Sport SVR. While final specs are still to come, the setup is said to deliver a gutsy 567 horses and a “mountain of torque,” according to Bowler.

Despite all this, the Defender is intended for the streets. With engineering support from Jaguar Land Rover’s Special Vehicle Operations, it has been refined for the road. That means air-conditioning and all your other favorite creature comforts. Bowler describes the CSP 575 as “an off-road car designed for the road.” That’s a bit of an oxymoron, but we see that they’re doing there.

The CSP 575 will be hand-built to order at Bowler’s factory in Derbyshire. Production will be limited, with deliveries slated for the second half of 2021. Pricing is expected to be in the ballpark of $260,000 (£200,000), depending on specifications. You can register your interest by contacting Bowler directly.

According to Bowler, this is the first of several high-performance models that will be announced over the next couple of years in partnership with Jaguar Land Rover. Get ready to meet a new family of rally-ready Defenders, folks.