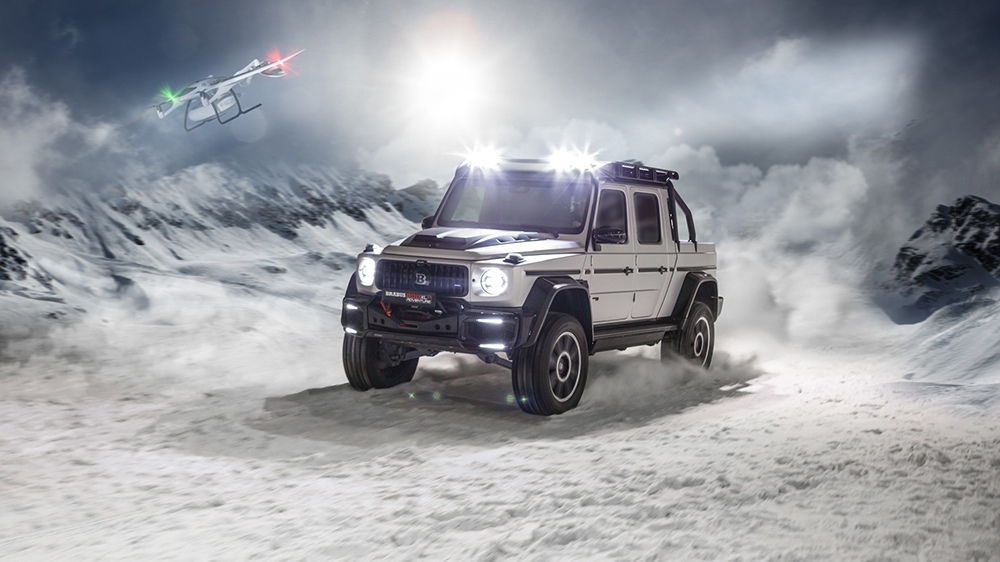 Brabus is well-versed in the world of souped-up vehicles no one knew they needed. And it’s latest, a heavily-modified Mercedes G-Wagen that’s been converted into a pickup, is no different. Not only is the resulting 789-horsepower utility vehicle longer, taller and more powerful off-roader than the SUV it’s based on; it also comes with its very own drone.

Named the 800 Adventure XLP, Brabus’s rugged dream truck is set to make its debut next month at the Geneva International Motor Show, the German tuners announced this week. While no one may really need it, that likely won’t stop lovers of Mercedes’s beloved SUV from lusting after it.

Based specifically on the Mercedes-AMG G63, the 800 Adventure XLP is a true beast. While it features the same twin-turbo 4.0-liter V8 engine of the G63, larger turbochargers mean the engine now proffers an eyebrow-raising 789 horses and 737 lb-ft of torque. While that gives the truck plenty of power, it brings a whole lot of zip, too. Brabus claims the vehicle can hit 62 mph in just 4.8 seconds. That’s a bit slower than the G63 but still more than fast enough for off-roading. It also tops out at an electronically limited 130 mph, due to its taller profile and off-road tires.

Beyond the powertrain, Brabus stretched the wheelbase by just over 20 inches. As a result, the vehicle is 27.1 inches longer than the G63. The tuner has also outfitted the truck with a steel and carbon pickup bed. And it has added new suspension with portal axles, raising the vehicle’s ground clearance to 19.2 inches, more than an inch taller than the original Mercedes-AMG model.

And because this is a Brabus truck, customers can chose from an array of options to further customize their ride. They includes a luggage rack, carbon-fiber wind deflector and 22-inch wheels fitted with beefy Pirelli Scorpion ATR all-terrain tires. The most noteworthy option, of course, is a drone made by Germany-based Wingcopter that comes complete with a take-off and landing pad installed into the truck bed.  The drone can hit speeds of up to 125 mph, so it’ll be able to keep up with the 800 Adventure XLP even when you’re flooring it.