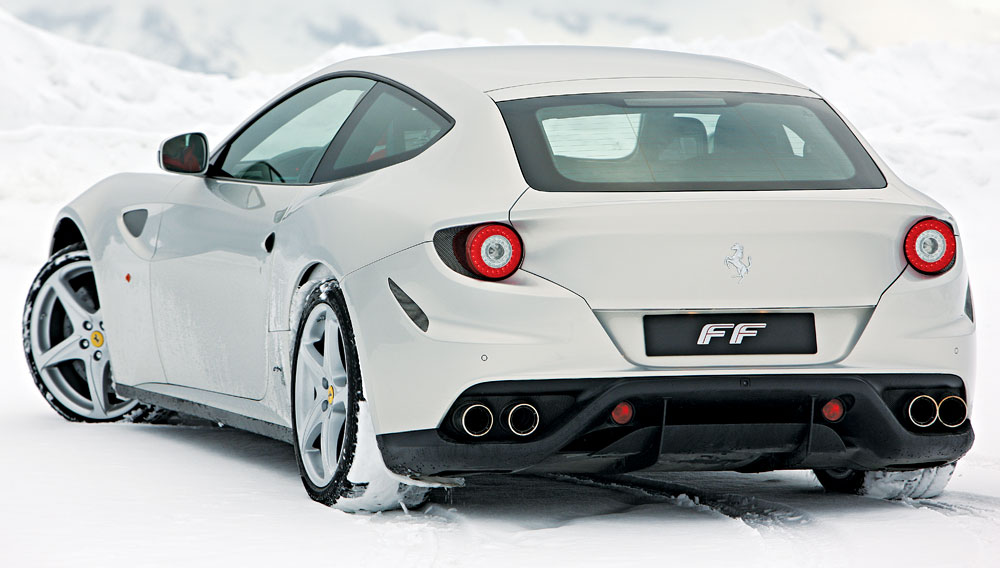 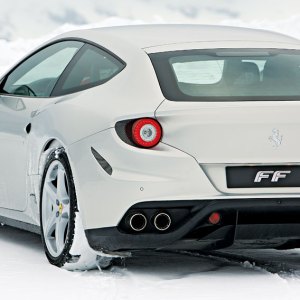 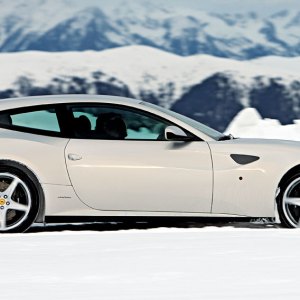 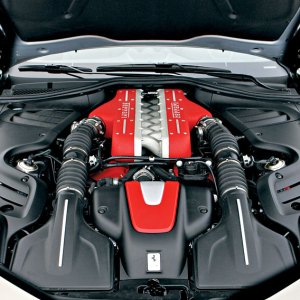 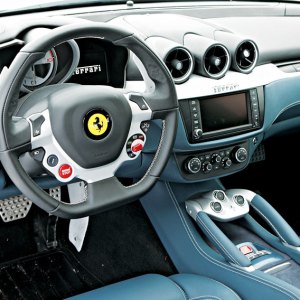 Ferrari had not generated this much second-guessing and gossip fodder since 1963, when founder Enzo Ferrari said he was selling his company to Ford—a dubious declaration, it turned out. So was the January announcement true, that the company—creator of sports cars of astounding performance and winner of world racing championships and grand prix by the hundreds—was preparing to introduce a shooting brake?

The vehicle would not have an alphanumeric or Italian name—not Dino or Europa, Modena or Scaglietti. Instead, it would be called the FF, for its four seats, a configuration suggesting a suburban Volvo, and for its four-wheel drive, implying that Land Rover owners might sell their SUVs so they can trundle across fields in a Ferrari. Furthermore, the FF, although born of short, gracile, ultra-athletic ancestors, would be a hatchback, though Ferrari does not use that descriptor.

If it sounds as though Ferrari has lost its way, rest assured it has not. The FF is a delight to drive, ride in, or just look at.

The first production FFs are expected to arrive in the United States in September, each having been purchased for a price rumored to be about $300,000. Unlike its competition—the four-door, four-seat Aston Martin Rapide and to a lesser degree (less powerful and less expensive) the V-8 Porsche Panamera—the Pininfarina-penned FF is beautifully proportioned and fully preserves its marque’s design language. Absent are odd bends and bulges that would draw attention to styling or engineering compromises. The FF even includes the egg crate grille of yesteryear, although its grille squares are large enough to hold ostrich eggs.

The car’s image is enhanced by a front-mid-mounted 6.3-liter V-12 pumping out 651 hp. A three-door Ferrari that could have been biased toward the prosaic is instead the world’s most powerful and fastest (208 mph) four-seater. With a zero-to-62-mph time of 3.7 seconds, it is only a whisker slower than the lighter, smaller, racier sports cars in Ferrari’s lineup.

Photographs that accompanied Ferrari’s January announcement showed the new car looking low and long and sporting a mildly bulbous back end to better accommodate the heads of its rear-seat passengers. The car also had a flat tokus, creating the type of squared-off silhouette that identified Rolls-Royce, Aston Martin, Bentley, and even Morris Minor and Mini shooting brakes (sometimes called breaks) during their European glory days in the 1930s through 1950s. That is about the time the shooting brakes morphed into Chevrolet, Ford, and Plymouth station wagons in the United States.

The original shooting brakes were luxury vehicles with bodies customized for hunters and other sportsmen who required a cargo area that was larger and more accessible than the trunk of a sedan. The term derives from the wagons of the late 19th century that carried hunters to and from the fields, along with their dogs, guns, and any game they shot.

Though rare, a four-seat Ferrari is not novel. The company has been building some degree of four-seaters since the late 1940s: first the 2+2 166 Inter, followed by the 330 GT by Vignale, then the 456s of the 1990s, and most recently the 612 Scaglietti, which the FF is replacing. Ferrari even built station wagons in the 2000s, albeit custom Pininfarina designs such as the 456 GT Venice for members of the Brunei monarchy.

Presumably, FFs will serve more practical purposes than those royal rides. The car’s versatility might be its most significant quality. The rear seats are almost large and almost comfortable and should be almost tolerable for six-footers during long trips, provided smaller folks are up front and the front seats are edged forward slightly. Luggage space, at 28 cubic feet when the rear seats are folded forward, is several totes larger than that of Audi’s A8.

The FF’s all-wheel drive allows tires to grip and track almost as well on snow and ice as they do on dry blacktop, which means that skiers and snowboarders seemingly could drive their Ferraris to the slopes of Gstaad and Steamboat next winter and leave their Geländewagens and Escalades at home. In fact, accessories for the FF will include a ski rack and Nordica skis with prancing horse logos. The options list also includes Ferrari-red child seats, suggesting that FF also could stand for Family Ferrari.

The early, positive response to the FF is obviously satisfying to Ferrari chairman Luca Cordero di Montezemolo, a Piedmontese and House of Savoy aristocrat and master of sprezzatura. Di Montezemolo also is the father of three young children, so he likely understands the incompatibility of sports cars and family travel.

Our discussion took place over dinner at Castello San Michele, located just above the villages of Riscone and Brunico, high in the Dolomites of South Tyrol, which Italy snatched from Austria as a trophy for winning World War I. German remains the mother tongue, and the food and wines are heavily Teutonic.

Südtirol, as it is known to the locals, is serious ski country, even in late March, which is when Ferrari brought a pair of FFs to Brunico for the cold-weather, all-wheel, slip-and-slide segment of the car’s global media introduction. A CH-47 Chinook troop-carrying helicopter carried the two FFs to the top of the Kronplatz, a 6,000-foot-high mountain with more than 60 miles of ski trails. Bulldozers carved out a seven-turn, half-mile circuit between snowbanks, and then the FF winter games began.

All-wheel drive is hardly an innovation. Ferdinand Porsche and the Dutch brothers Jacobus and Hendrik-Jan Spijker (founders of the original Spyker marque) were its pioneers more than a century ago. Traction for all wheels gave World War II jeeps the tug of a Missouri mule, and AWD has been keeping Audis out of the weeds and body shops for more than three decades. However, Ferrari’s patented system is some 50 percent lighter than conventional AWD mechanicals, and it essentially retains a rear-wheel-drive configuration. Engage the Wet or Ice-Snow manettino setting on the steering wheel and the system will go to work, reading road surfaces and vectoring torque to the wheel or wheels that can use it best. Via the engine-mounted Power Transfer Unit, the system can convert the FF into a front-wheel-drive vehicle, which uses only the first four gears of the 7-speed transmission, if the road surface, car speed, and gearing deem it necessary.

On the makeshift Kronplatz circuit, the FF tracked well despite traveling hard and quickly across the snow and ice. Credit for this feat goes to the manettino settings, which also extract the fangs from throttle and steering inputs, adjust the thresholds of stability controls, and gently modify the laws of physics as they apply to friction and moving masses.

The FF slipped, of course, but even when challenged by bursts of acceleration, it handled far better than do most SUVs on arctic surfaces. Braking was no dodgier and maybe easier than slowing quickly in a winter monsoon on the San Diego Freeway. The FF even survived a couple of performance starts on the high-altitude skating rink.

The notion of taking a Ferrari on an ice-fishing trip to Lake Wobegon in February is a new concept that brings much pleasure to di Montezemolo, although he acknowledges that the shooting-brake style might not immediately appeal to a Ferrari purist. “Not today, maybe, but tomorrow he will like it,” said di Montezemolo.

With the company’s annual production now reaching nearly 7,000 cars, he continued, a Ferrari “is no longer a gadget for rich people, but a car you can drive every day. And [the FF] is ready to be used a lot. It is not a competition car; you can drive it easily. Yet, by its engineering, design, and performance, it is still a Ferrari.”

Indeed it is. On a one-day romp through the Tyrolean Alps—towering, snow-draped massifs forming a landscape that looks like a Hallmark Christmas card—the FF delivered the type of adventure and exhilaration that always has been associated with Ferraris. The dual-clutch transmission’s paddle-shift changes are so slick, so slight they can barely be measured. The massive and mighty carbon-ceramic brakes will slow a tank and allow corner entry speeds that would win late-braking contests against any sports car on the planet.

Steering and balance are needle-point precise. Accel­eration, accompanied by an exhaust note that is so rousing it has been used for ringtones and alarm clocks, is feral and furious. Magnetic dampers paired with front wishbones and rear multilinks form a firm but supple suspension that is just about perfect. A driver feels as though the FF could never slide off any road, or any surface.

If all these boy-racer attributes disturb one’s propriety, know that the FF can be fitted with a stop-start system that is part of the optional High Efficiency, Low Emissions (HELE) package. The HELE package also includes an optimum fuel-pump capacity, combustion controls, and an electric compressor for the air-conditioning unit. According to Ferrari, these features help the car’s engine operate 25 percent cleaner than any other V-12 known to engineers. The HELE system also increases the engine’s efficiency, enabling the FF to cover 18 highway miles on a gallon of fuel.

Di Montezemolo says that development of the FF has been “one of the most difficult challenges for Ferrari in the last 20 years.” But with the first-year production run of about 800 cars already sold out, he presumes nothing but acclaim for Ferrari’s radical and revolutionary direction.

So can we expect the company to paddle deeper into the automotive mainstream and develop a sedan, if only to serve the United States, Ferrari’s largest customer?

“We will never do a four-door,” vowed di Montezemolo.

What about joining Porsche and BMW and building an SUV?

How about an FH, a Ferrari Hybrid?

“Yes, we will do a Ferrari hybrid car, and we are working on it now. There will also be other sports cars. But you must remember that if we do too many cars, they are no longer Ferraris.”