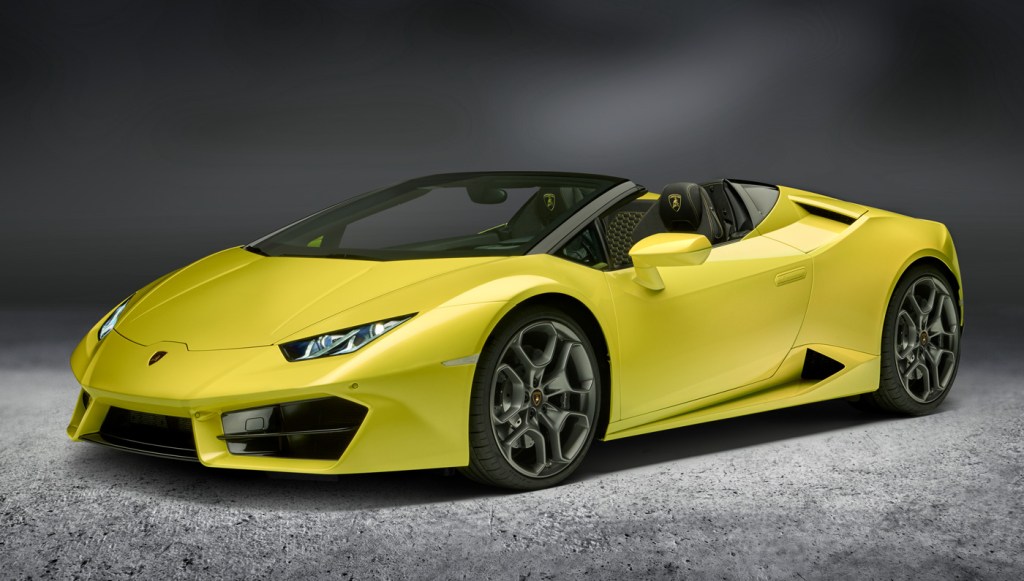 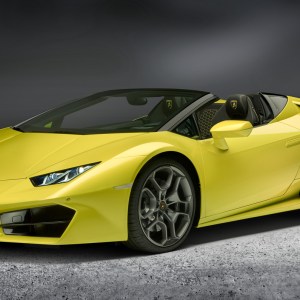 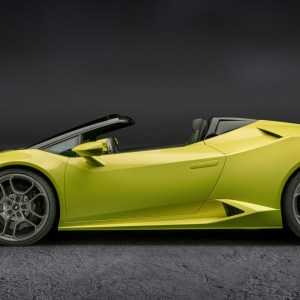 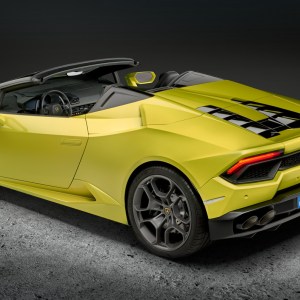 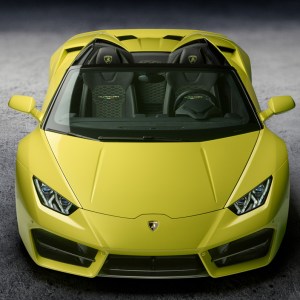 Performance and handling take a front seat in the new Lamborghini Huracán Rear-Wheel-Drive Spyder revealed today in sun-soaked Pacific Palisades, Calif., a fitting location for the marque’s latest open-top titan. A rear-wheel-drive variant of the Lambo model first let loose last year, the racy Raging Bull carries 60 percent of its weight at the back and has had its steering, stability, and traction-controls adjusted accordingly.

With a chassis and body shell fabricated from aluminum and carbon fiber, the car weighs in at 3,327 pounds and, with a naturally aspirated 5.2-liter V-10 engine (generating almost 400 ft lbs of torque), carries a weight-to-power ratio of 5.7 lbs per hp. Corralling 580 hp, the convertible courses from zero to 62 mph in 3.6 seconds on its way to a top speed of 198 mph.

Matching the model’s namesake, a famed fighting bull from 1879, the most recent Huracán imparts an imposing presence. The redesigned front end has been enhanced with enlarged air intakes for improved cooling and increased delivery of downforce on the front axle while the posterior portion has also been accentuated for aerodynamics. Efficient airflow is ensured when the soft-top canopy (able to be activated in 17 seconds at speeds of up to 31 mph) is lowered as two fins automatically elevate from the roof casing to help cut wind resistance. In addition, two removable lateral wind guards reduce exterior noise when touring topless.

Another factor in the sportster’s aesthetic ferocity is its formidable stance, which is made more impressive with custom-designed Pirelli PZero tires set on 19-inch Kari rims—wheels arrested by contoured steel brakes as needed.

The road experience itself is bolstered by the Lamborghini Doppia Frizione (LDF) 7-speed dual clutch with “launch control” (for standing-start sprints); the Lamborghini Piattaforma Inerziale (LPI) sensor system, which is synched with the highly adaptive suspension; and the optional Lamborghini Dynamic Steering (LDS) for race-like response. Further fine-tuning comes from the Adaptive Network Intelligent Management (ANIMA) feature that allows push-button transition to three different driving modes (Strada, Sport, and Corsa) depending on preference. And if being behind the wheel was not entertaining enough, the cockpit contains an infotainment system with a high-resolution, 12.3-inch liquid-crystal display.

The Huracán Rear-Wheel-Drive Spyder will be available in January at a starting price of $220,000. (lamborghini.com)