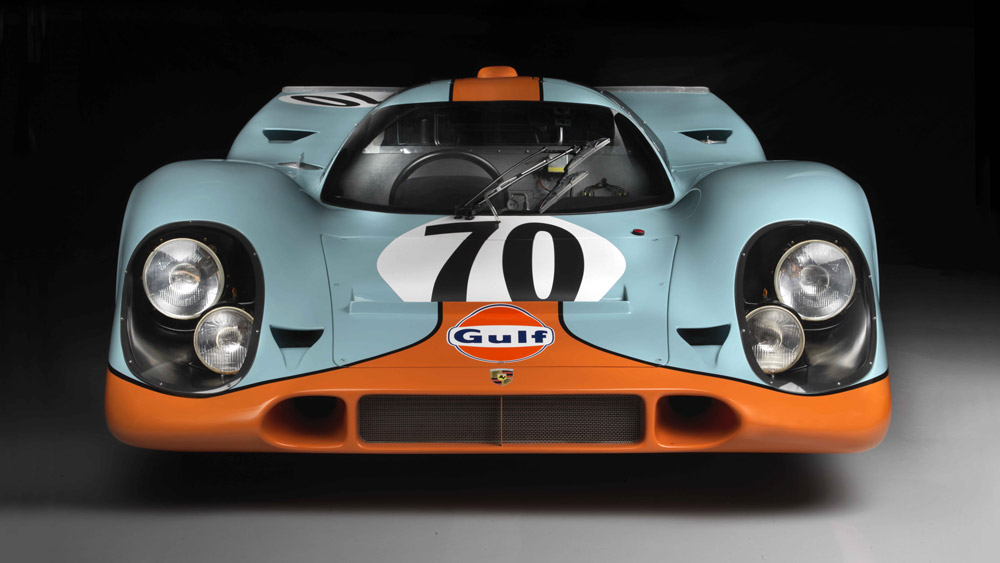 This month saw the opening of the Brumos Collection, a 35,000-square-foot automotive museum in Jacksonville, Fla. The large exhibition space features interactive exhibits where visitors can engage with more than three dozen racing and collector cars, each historically significant and of particular interest to followers of motorsport competition.

The Brumos Collection celebrated their grand opening by unveiling the most recent acquisition to its race-car stable. What is often regarded as Porsche’s most famous competition car, by virtue of its having been driven by Steve McQueen in the epic 1971 racing film Le Mans, the 1970 Porsche 917K (No. 917-024) wears iconic Gulf livery—powder blue and orange—and has had an interesting history since its cinematic debut. Initially used by the Porsche factory as a test car for the 24 Hours of Le Mans endurance race, it appeared in the film shortly afterward and was then stored in a barn for two decades, an indignity that likely saved it from the fate of subsequent racing incidents or modification. It emerged in 2001 and, following a full restoration, became the most expensive Porsche in history when auctioned at Monterey Car Week by Gooding and Company in 2017, selling for $14,080,000.

Brumos is a well-known name to racing fans. Sponsored by Brumos Porsche, an authorized dealer for the German marque, Brumos Racing was established in 1971 by the dealership’s owner and racer Peter Gregg as part of the IMSA Championship. His team fielded many important Porsches and star driving talent, including Gregg, who was four-time winner of the 24 Hours of Daytona and one of the most accomplished American drivers in the history of the sport.

The 1968 Porsche 908 on display.  Photo: Courtesy of the Brumos Collection.

With competition in Brumos’ blood, other notable competition cars on display include the 1968 Porsche 908 that stormed the Nürburgring when the yet-unproven design was new. Its power and performance are dwarfed by comparison with the 1971 Porsche 917/10 Can-Am racer campaigned by Brumos and wearing the team livery of white, red and blue. Its twin-turbocharged, flat-12 engine developed 1,100 hp and was responsible for speeds of more than 200 mph. It remains one of the most wicked race cars in Porsche’s history.

Tipping a hat to the familiar 911 shape is Peter Gregg’s last race car, a twin-turbocharged 1979 Porsche 935 that made more than 700 hp and topped 200 mph. Behind its wheel, Gregg took a record-setting eight wins and eight pole positions during its track career. It is believed to be the last remaining unmodified 935 still in existence, and is shown as raced when Gregg won the 1979 IMSA Championship.

The 1979 Porsche 935 that Peter Gregg drove to eight wins and eight pole positions.  Photo: Courtesy of the Brumos Collection.

Porsches are not the only highlights of the collection, which features some early iron rarely seen in collections anywhere. The 1914 Peugeot L45 is a purpose-built race car with the first dual-overhead camshaft engine. A valve-train design used in today’s state-of-the-art automotive engines, the technology was truly revolutionary more than 100 years ago. Peugeot was a name to be reckoned with in the early 20th century. Driver Jules Goux won the 1913 Indy 500 in one of the French machines, and the Brumos example is one of only two that remain.

A 1923 Miller 122 Grand Prix, which was raced in Europe, finally returned to America after an 89-year absence, and is one of the most complete survivors of the rare racing marque.

The Brumos Collection pays homage to Jacksonville’s automotive heritage, and is housed in a new building designed after a former Ford plant commissioned by Henry Ford in 1924. Details include antique guard rails, a board track leading to the entrance, and masonry that recalls Indianapolis Motor Speedway’s famous “Brickyard.” Visitors explore the exhibits at their own pace, and tickets must be purchased online prior to arrival. Located at 5159 San Pablo Road South in Jacksonville, the Collection is open to the public from 10 a.m. to 3 p.m. on Thursdays and Fridays.