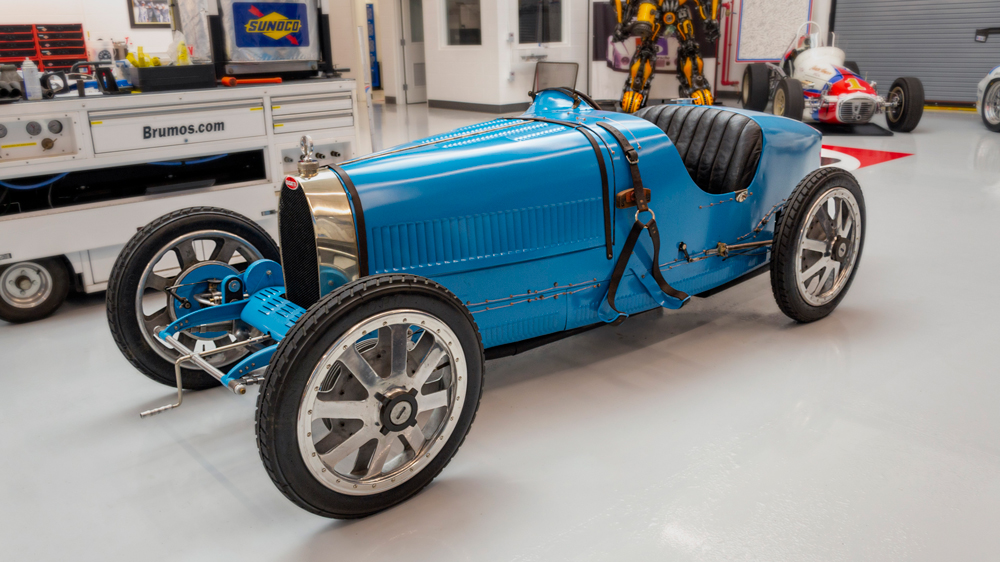 If you close your eyes and imagine competition cars from the early days of motorsport, chances are the Bugatti Type 35 open-wheel racers come to mind. Launched in 1924 and often liveried in classic French Racing Blue, the tiny terrors were some of the winningest cars in history, racking up more than 1,000 victories during their heyday. Such a remarkable number of wins is especially impressive given that there were only about 240 examples of the Type 35 built in all its iterations. Many of those that have endured the ravages of competition bear the scars, replacement mechanicals and new bodies to show for their valor.

The 1925 Bugatti Type 35 in the Brumos Collection is unusual for its highly original condition, having escaped the tribulations of the track unscathed. Originally purchased by Standard Oil heir Wallis Bird, it was only raced in the 1937 Automobile Racing Club of America Grand Prix contest—and that was after being parked for 12 years in the Manhattan socialite’s 27-car stable at his Long Island estate. With only two subsequent owners, it was eventually acquired by the Brumos Collection in Jacksonville, Fla.

The mission of the Brumos Collection is not just to preserve its assemblage of historic vehicles in a public museum setting, but to maintain each one in peak operating condition. Brandon Starks, the museum’s executive director, put things in perspective: “Because this Bugatti Type 35 is so original, the challenge was in determining what we felt would be right for the car long-term, maintaining its history and originality through preservation and conservation. This is of uncompromising importance to us, as we see ourselves as caretakers rather than owners.”

What ensued was an 11-month project focused on servicing the race car’s 2.0-liter, inline eight-cylinder engine. But like so many projects that begin with a straightforward task, opportunities to correct and perfect presented themselves as things progressed.

Accessing the engine, it seemed, would require the methodical disassembly of the car, and so a sympathetic recommissioning began. Often encountered with old engines, major oil leaks necessitated that the cylinders be re-sleeved, while, according to Brumos Collection assistant manager Aaron Israel, “Certain pieces of hardware needed to be corrected or re-machined to fit better than they had previously. We also cleaned all the hardware to remove any rust or corrosion. That’s critical in preventing decay and ultimately preserving history.”

The car after its only race.  Photo: Courtesy of the Brumos Collection.

The team also made the decision to repaint the Bugatti in its original blue color. Specialist Terry Simmons found traces of the original paint during the disassembly process, and formulated the identical hue and, importantly, the proper finish—not too glossy—to return the little bolide to its former glory. Putting it in perspective, Starks explained, “The patina and signs of wear are reflections of the life that a particular car has lived. Those are marks of history, which should always be considered during preservation.”