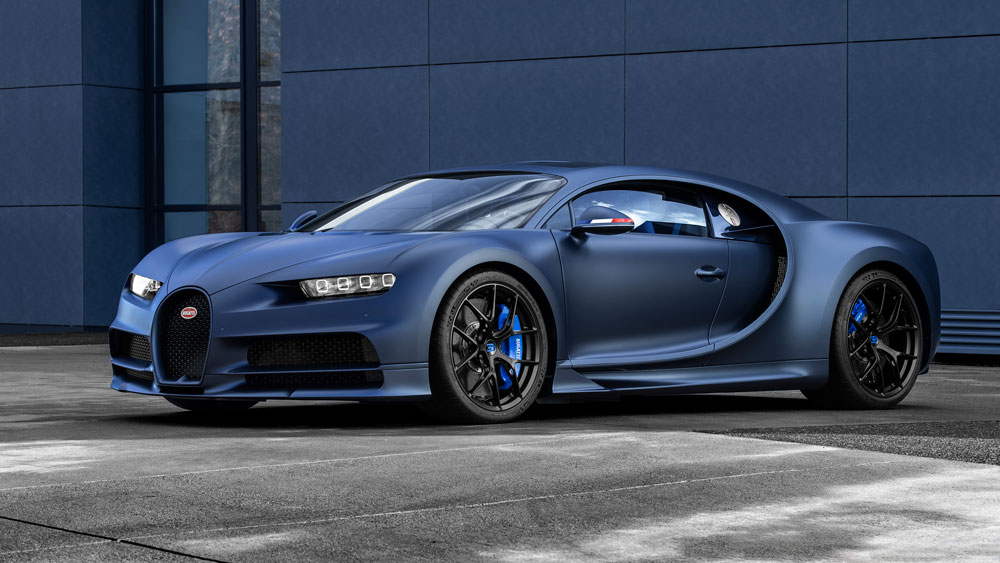 What’s more exclusive than a $3 million, 1,500 hp Bugatti Chiron? How about a limited-edition 20-piece run of the fabled hypercar dubbed the Bugatti Chiron Sport “110 ans Bugatti,” French for “we’re French and we’ve been around for 110 years!”

Although founder Ettore Bugatti bore a decidedly Italian name, the automaker actually plied his specialized trade in France, specifically Molsheim in the Alsace region where these jewel-like four-wheeled rockets are still produced by hand. The “110 ans Bugatti” version of the Chiron Sport is an unabashed ode to Bugatti’s home country, a “bleu, blanc, et rouge” celebration that may not tick every enthusiast’s Chiron configuration sheet but will no doubt make Francophiles swoon.

The special edition will be limited to 20 examples.  Photo: Courtesy of Bugatti Automobiles S.A.S.

The dominant theme is established by the matte-blue paintwork that covers the car’s exquisite carbon-fiber body. It’s not a flag-waving blue, but rather something far subtler (and almost menacing), which the Bugatti brass likens to hot-rolled steel. The car’s front end is custom Steel Blue Carbon, while its brake calipers also get the blue treatment. The Chiron’s sandblasted aluminum gas cap announces to the world that this is an elite edition. If you spring for this car, Bugatti will let you paint the base plate of the cap blue or white.

If there is one truly brash element to this tribute car, it’s found at the rear. The Chiron’s wing-cum-air-brake can flip skyward like a whale’s tale to bring the vehicle down from its ludicrous sprints to 261 mph, and when it does you’re flashing anyone in your wake with a giant blue-white-red French flag. Touche!

Inside, the “110 ans Bugatti” Chiron Sport demands true patriotic fervor. The French tricolor features prominently both on the seat faces, where a headrest logo is bisected by a ribbon, and the seat backs. The matte carbon-fiber steering wheel has dark blue accents. Alcantara lines most of the cabin, in blue naturally. This Chiron’s special key is swaddled in blue, white, and red leather patches, and if you’re still not sure this isn’t a, dare we say it, run of the mill Chiron, a solid silver medallion rests in the center console. It’s there to remind you that you’re piloting a piece of Bugatti manufacturing history.