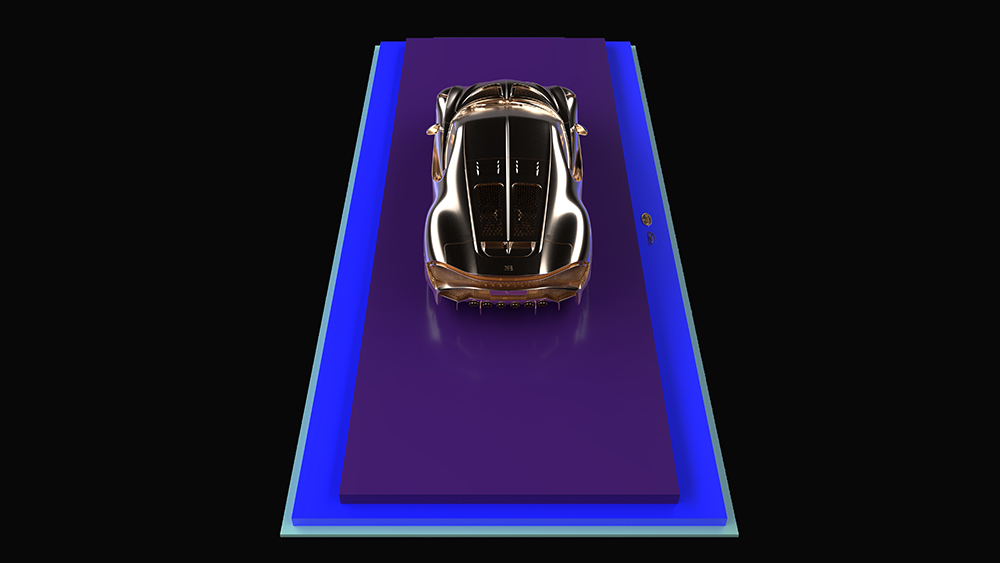 Bugatti and Asprey’s first collab is like a car-shaped Oscar for your mantle.

Designed to commemorate the French marque’s one-off La Voiture Noire hypercar, unveiled in 2019, the sculpture is handmade in 24-karat rose gold and mounted on a bespoke base. Its design is finished with the signatures of both the carmaker and the British designer of luxury jewels, timepieces and more. An NFT will accompany the sale of this head-turning centerpiece, and will be linked to the physical work via a QR code and with a unique serial identifier. Launching in March, the exclusive drop will also feature a series of 261 smaller sterling silver sculptures that come with their own NFTs; the number 261 was chosen because it’s the top speed of the La Voiture Noire, as fans may recall.

For a bit of background, the hypercar that inspired the sculpture was one of four Atlantic models from the marque that debuted in 1936. Originally dubbed the Bugatti Type 57 SC Atlantic, the black car, or “La Voiture Noire,” went missing and has since attained a “near-mythical” status among collectors. Seven decades later, the carmaker unveiled a one-off take on the model that sold for a whopping $13.4 million. It was delivered to its new owner two years after its prototype was revealed, states Road Show.

Announced at the beginning of 2022, the Bugatti and Asprey partnership has the goal of creating highly exclusive objets d’art. Asprey’s in-house silversmiths will dedicate four months at their workshop in London to the design of this first collection including the one-of-one sculpture. As the owner of the main piece, or any of the other 261 collaborative works, you’ll be able to get a closer look at the production process via an invitation-only microsite. Each of the physical works will be finished with colored bases in the duo’s signature colors.

“This year, at Asprey, we celebrate our 241st anniversary,” says Ali Walker, chief creative officer of Asprey’s Digital Studio in a statement. “The Asprey Digital Studio and the newly expanded London workshop heralds a new era. The partnership with Bugatti, such an iconic and artistic brand, is the ultimate collaboration to explore new production and artistic techniques. The bold colors mixed with the gold and silver precious metals create a vivid pop art theme. As for the ‘Noire’, only the buyer of the one-of-one will know that.”

For more details on the March release, visit Bugatti.com.