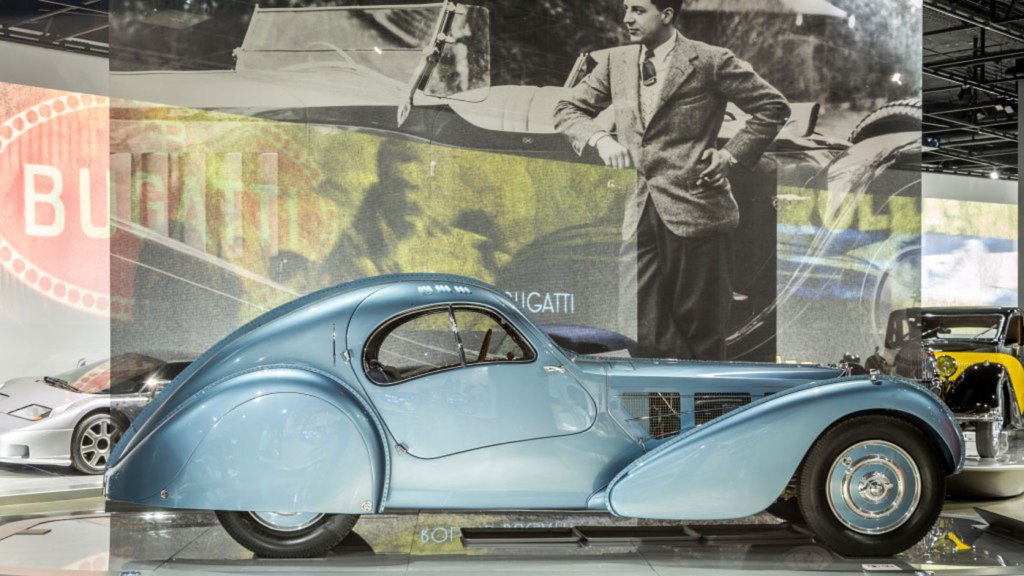 To call the Bugatti Type 57 SC Atlantic a car is like calling a Faberge jewel an egg or a Cohiba Behike a rolled-up tobacco leaf. Now 80 years old, the French automaker’s pièce de résistance—of which only four were made between 1936 and 1938—is an exquisite piece of hand-hammered sculpture that could also take you to the opera or the presidential palace. And to possess one today is to lay claim to a $40 million-or-more automotive Holy Grail.

So, it’s not surprising that Bugatti pulled the wraps off a re-envisioned update of the classic at the Geneva Motor Show this month. The homage, with the moniker La Voiture Noire, is a carbon-fiber one-off with 1,500 hp, and has already been sold for nearly $19 million—the highest price to date for a new automobile.

In its own way, the original Atlantic was equally as pioneering. The first Atlantic was built using elektron, an aviation-grade metal that is 90 percent magnesium and 10 percent aluminum. The strong but lightweight material cannot be welded, which explains why the fin-like ridge that runs down the center of the car is composed of rivets. For the production models, aluminum was used but the rivet look stayed.

Elegant but practical design cues reign throughout the 1930s Atlantic, foremost at the doors, which—decades before the Ford GT40—curved into the plane of the roof to give passengers better ingress and egress. The two front pontoon fenders that announce the car are flush to the body, signaling a commitment to aerodynamic purity that continues in the teardrop shape of the rear and also explains the car’s name. Atlantic was chosen to pay tribute to Jean Bugatti’s friend Jean Mermoz, an aviator who pioneering the South Atlantic route before disappearing there in 1936.

Consistent with the bespoke nature of such a car, all four of the production Atlantics were given slightly different traits and, as a collective, remain an unmistakable tribute to automotive genius. Incidentally, Bugatti notes that one of the original Atlantic’s has disappeared, and suggests that if it were ever unearthed it could fetch upwards of $100 million. Suddenly, $19 million for a modern version doesn’t sound so bad at all.