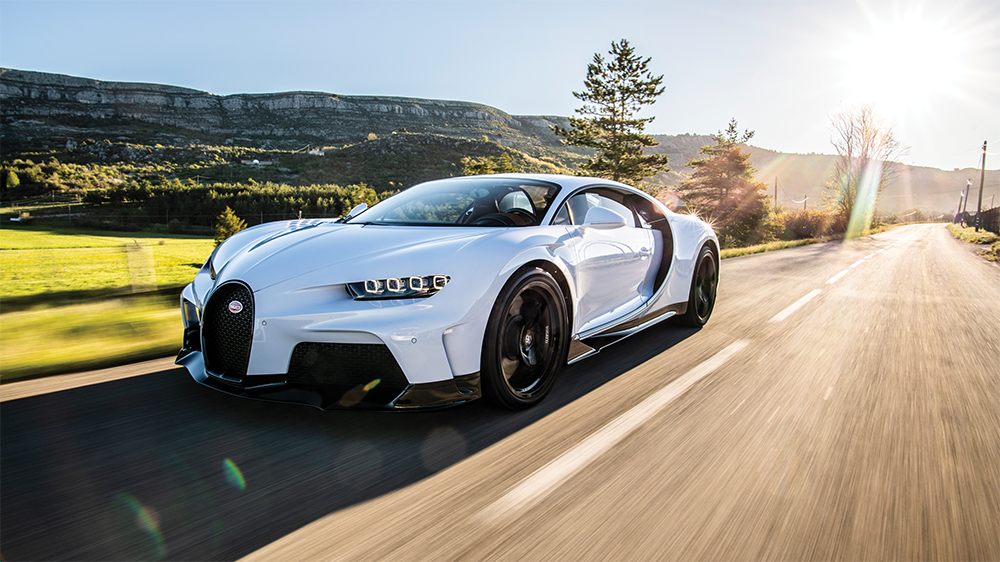 So here it is: peak internal-combustion engine. Since Karl Benz built his Patent Motorwagen 135 years ago, carmakers have been refining and emboldening the gas-guzzling power plant that still propels most of our cars, but we’ve finally reached a tipping point. Automakers are announcing they’re ceasing the development of conventional engines in favor of hybrid and electric power trains, even setting dates by which they’ll no longer offer the former at all. Bugatti is no exception.

Now with a majority of it controlled by supercar and EV-tech start-up Rimac, the French marque will go hybrid for its next all-new model, eventually to be followed by a fully electric vehicle. But the recent launch of Bugatti’s 1,578 hp Chiron Super Sport marks this bittersweet moment perfectly: Not only is it the fastest, most powerful pure-combustion production car from a heritage manufacturer; there’s also a good chance it will remain so forever.

Arguments and nit-picking shall ensue, of course. Hennessey, Koenigsegg and SSC North America all have cars that claim greater muscle in development, but assuming these vehicles are homologated and make it to production with their targeted outputs intact, they’ll still require E85 gas to deliver on those promises. The Chiron Super Sport makes its power on regular fuel and can be purchased now.

A look at the interior gears and steering wheel.  Courtesy of Bugatti

Fewer than 40 Chiron build slots remain, which will be split between this Super Sport and the track-focused Pur Sport with its (mere) 1,479 hp. If you’re lucky enough to have both—and some will—you might be surprised to discover that the more powerful car actually feels a bit slower on the road than the Pur Sport, with the latter variant’s shorter gearing making it more urgent up to around 180 mph.

But the Super Sport wasn’t intended to provide more speed everywhere. It was conceived as the ur-Chiron, eschewing the Pur Sport’s feral character to retain the famous refinement of the original, only this time with an unanswerable power output and a staggering (if largely academic) top speed that’s been—get this—“limited” to 273 mph.

Even priced at more than $3.5 million, it’s a deeply impressive and appealing combination. Despite its grunt, I found that at low speeds the Super Sport is as docile and cooperative as a Volkswagen Golf, but with the thrust and handling to devour transcontinental road trips like a street-going Learjet. The suspension has been firmed slightly to cope with the higher v-max, which doesn’t compromise the model’s elegant ride experience but does make the car a little more agile on a mountain road. It’s amazing how quickly you forget the size and mass—let alone the value—of what you’re driving as it dives into apexes like a big Ferrari; it’s not scary, just fun. Likewise the massive traction that allows you to deploy the enormity of that power on any reasonable straight, even if only momentarily.

While the Chiron Super Sport boasts 1,180 ft lbs of torque and hits 273 mph, its comportment at low speeds rivals any daily drivers.  Courtesy of Bugatti

But if you want to feel the benefit of the Super Sport’s larger turbochargers and subtly reworked aero package, with its Le Mans–style “longtail” bodywork, you need a circuit—an extremely lengthy one. At Volkswagen’s Ehra-Lessien test track, with straights that run to five miles, Bugatti took one of these to 304.8 mph. I had only the 1.1-mile straight at the Paul Ricard circuit in the South of France. Entering at about the same speed and braking in approximately the same spot, the Pur Sport hit 206 mph but the Super Sport reached 217 mph, its acceleration swelling noticeably faster and far harder than its sibling or anything I’ve driven before. Or, most probably, anything I’m ever likely to drive again.