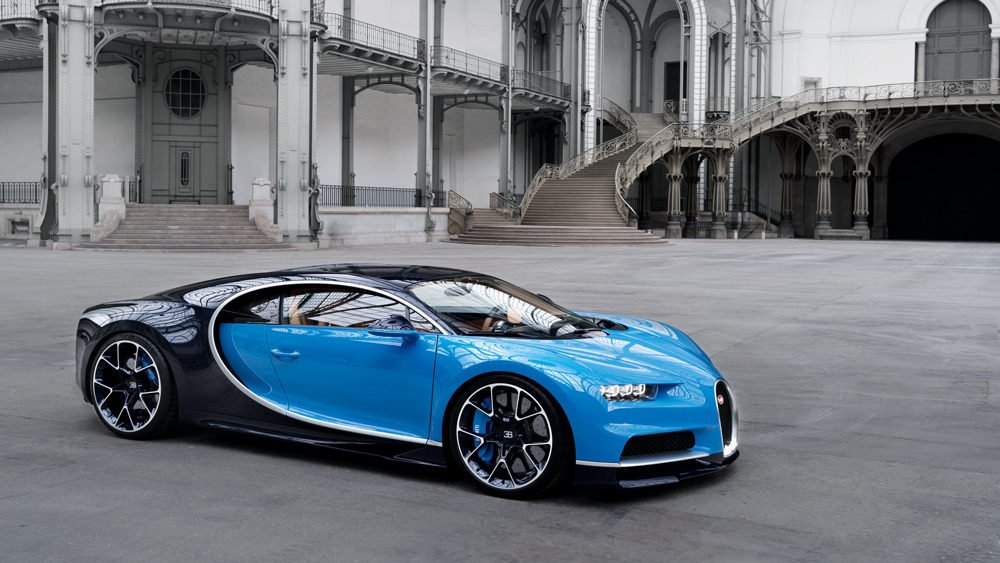 On a sunny spring afternoon, several hours into a drive along a series of winding roads in Portugal’s pastoral heartland, the Bugatti Chiron revealed its true nature. Until that point, the car had performed effortlessly and elegantly, pairing the power of an Olympic weight-lifting champion with the precision of a surgeon. But when we reached the start of a long, straight stretch of tarmac and I finally had the chance to drop the hammer, the $3 million two-seater transformed into a land missile, shooting forward with seemingly endless thrust. The acceleration was seamless and unrelenting, pinning my passenger and me against the quilted-leather seats, until I stabbed the left pedal to swiftly and violently reduce the speed.

The onboard telemetry recordings later revealed staggering numbers: The car had reached 234 mph while the quad-turbocharged 16-cylinder engine was producing 1,466 hp—just shy of its 1,500 hp peak. This performance would be stunning for a racecar, but the Chiron is a street-legal luxury coupe. The show of beastly aggression contrasted with the refined character the car had been displaying and revealed its delightful dual personality.

The Chiron is named for Louis Chiron, a Monaco-born racecar driver who won more than 20 grand prix from the late 1920s through the 1940s, some of them while competing for the Bugatti factory team. In fact, no driver has earned more podium finishes in a Bugatti than Chiron did. His namesake car is the successor to the Veyron, which, with its four-figure horsepower and seven-figure price, made other supercars seem almost practical. The Veyron had a 10-year production run that ended in 2015 and included a total of 450 cars of various variants—from the initial 1,001 hp 16.4 to the 1,200 hp 16.4 Grand Sport Vitesse.

Bugatti unveiled the Chiron in March 2016 at the Geneva Motor Show. By December, the French manufacturer had already sold 200 examples. The company began deliveries in March and plans to build 500 examples. According to Bugatti, the Chiron can accelerate from zero to 62 mph in 2.5 seconds and reach 124 mph in 6.5 seconds. Its top speed is electronically limited to 261 mph.

Bugatti’s goal with the Chiron was to build a vehicle that inspires even more superlatives than its predecessor did. It has succeeded. Achieving that objective involved a comprehensive weight-savings program and a nearly complete revamping of the engine that powered the Veyron. The Chiron engine’s 16 titanium connecting rods have been strengthened to handle 9.1 tons of load, though each weighs less than a pound. The intake manifolds are now carbon fiber instead of aluminum, making them both stronger and lighter. And by using lithium-ion-phosphate technology, Bugatti has cut the battery weight in half. It has also lightened the wheels, but the brakes incorporate the first road-going calipers to feature a forged one-piece construction and eight titanium pistons for greater stopping power and pedal feel.

According to the company’s head of interior design, Etienne Salomé, only one component of the Chiron was allowed to have significant heft: the Bugatti badge attached to the front grille. It’s a richly finished piece in enamel and silver. But even it weighs only one-third of a pound.

Compared to the Veyron’s engine, the Chiron’s features 95 percent new parts. It’s lighter, more thermally efficient, and more powerful. In addition to the 1,500 hp, it cranks out 1,180 ft lbs of torque. Just as noteworthy as those figures is the way the power is delivered. The four turbochargers, which are 68 percent larger than the Veyron’s, work together sequentially to spread the torque plateau from 2,000 to 6,000 rpm. The expansive power band offers greater flexibility and acceleration in each of the Chiron’s seven gears, while refinements to the dual-clutch gearbox deliver smoother, quicker shifts.

Bugatti says it invested more than 300 hours of wind-tunnel work to optimize the Chiron’s shape for aerodynamics. Because of that testing, the design includes a front curtain that diverts air around the wheels and a flat underbody.

The Chiron is constructed largely of carbon fiber, though the tail-lamp bevel is made from what may be the industry’s largest single piece of milled aluminum. It stretches 63 inches across the tail of the car. A C-shaped strip of polished aluminum frames each door, sweeping from the front wheel well to the A-pillar. The cabin features a similar design element, a C-shaped strip of LED accent lighting that begins at the center console and wraps overhead between the driver and passenger seats.

All the materials in the cabin are what they appear to be: The buttons and knobs are made of machined and knurled aluminum, and the seats and other surfaces are clad in a variety of leathers. The most prominent feature on the dashboard is an analog speedometer that goes to 300 mph. Forward thinking prompted Bugatti to choose an analog gauge instead of a digital display, which would be visible only when the car is running. According to the company, at some point in the future when a Chiron is parked on the fairway at Pebble Beach or presented at another concours, spectators will derive a sense of wonder when they gaze at the dashboard and see how fast the car could go. (It’s said that the Chiron could reach 288 mph if its speed weren’t intentionally limited for safety purposes.) The speedometer is flanked by high-resolution screens that display information ranging from oil and tire pressure to audio settings and satellite navigation directions. Four dials along the center console can control such functions as heating and air-conditioning, or they can be used to show the aforementioned telemetry data: top speed, engine rpm, horsepower output, and so on.

Press the Chiron’s steering-wheel-mounted blue starter button and the engine’s 16 cylinders ignite with a pleasantly bass-heavy exhaust note. While the audio system delivers superb sound through Accuton speakers that include four tweeters encrusted collectively with a carat of diamonds, you might prefer listening to the deep frequencies of the hulking power plant accented with subtle top notes of turbocharger whine.

When you pull the gear selector into drive, it takes just a touch of throttle to propel the Chiron forward. Under slightly firmer throttle pressure the car leaps ahead with effortless acceleration. A firm squeeze of the accelerator yields a staggering thrust that will launch you toward the next zip code.

The prodigiousness of the Chiron’s power band requires attention; the car accumulates speed so quickly that you can reach triple digits before you’re able to calculate the cost of the speeding ticket. But just as quickly as the power train produces speed, a quick dab of the left pedal reduces it. The rear wing automatically deploys when the car reaches 111 mph, and if you hit the brakes when it’s deployed, it will tilt forward, catching the air and helping the massive carbon-ceramic brake discs bring you to a swift halt.

The Chiron’s handling is intuitive and supple thanks to an adaptive suspension that monitors wheel travel and adjusts damping accordingly. The ride is remarkably smooth at slow speeds over rough pavement, and the car remains controlled and responsive through medium- and high-speed corners. Though the Bugatti brass say the Chiron can be “easy to drift,” my experience behind the wheel suggests that it would take aggressive inputs to make the car go sideways. Given the Chiron’s power and price, it’s best to take the carmaker’s word for it and not try anything stupid.