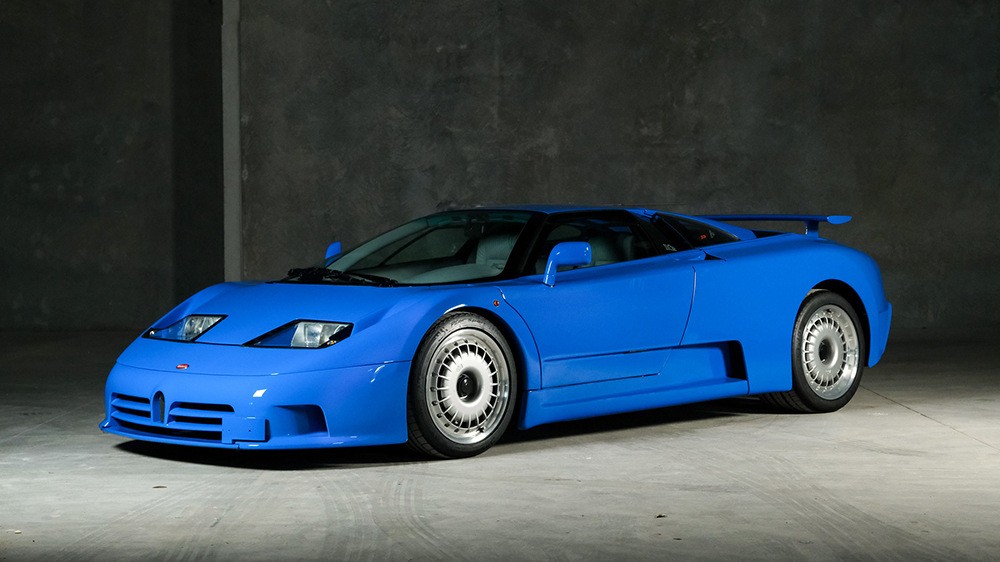 The Bugatti EB 110 GT isn’t just a gorgeous supercar; it helped bring marque back from the dead. Now an ultra-rare example of the landmark is up for grabs.

A beautifully maintained and unique 1994 EB 110 GT was just posted for sale on the Copley Motorcars website. But this isn’t just some early run example of the speed machine; it’s the only factory prototype built during the five years it was in production.

Founded in 1909, Bugatti closed up shop in 1963, 16 years after the death of founder Ettore Bugatti. Nearly a quarter century later, the French brand was acquired and revived by Italian businessman Romano Artioli. The resurrected marque was based in Modena, Italy (yes, the same Modena where Ferrari is headquartered) and produced one production model before being purchased by the Volkswagen Group in 1998—the EB 110 GT supercar.

This particular example of the mid-engine coupé is finished in Bugatti Blu, which highlights its wedge shape, angular lines and scissor doors. Even more impressive, though, is its quad-turbocharged 3.5-liter V-12 engine. Mated to a 6-speed manual gearbox that sends power to all four wheels, the mill is capable of generating 553 hp and 450 ft lbs of torque. Thanks to all this power, the EB 110 GT can rocket from zero to 60 mph in 3.4 seconds and reach a top speed of 212 mph, which briefly made it the world’s fasted homologated production vehicle. The brawny mill isn’t the only reason for the car’s blistering performance numbers; a carbon monoque frame also means that it tips the scale at a relatively light 3,940 pounds.

Artioli’s Bugatti only built 139 examples of the EB 110 GT supercar before production ended in the mid ‘90s. Of those, this was the only prototype, leading some to call it a “holy grail” for the model. Adding to the car’s allure is the fact that it’s been completely refurbished and has just 680 miles on the odometer.

You’ll have to contact Copley for pricing information, but we wouldn’t be surprised if this car goes for more than the half million it usually fetches on the open market. Still, considering its historical importance and the fact that you can actually take it for a spin around town, that just might be worth it.

Check out more photos of the Bugatti EB 110 GT below: