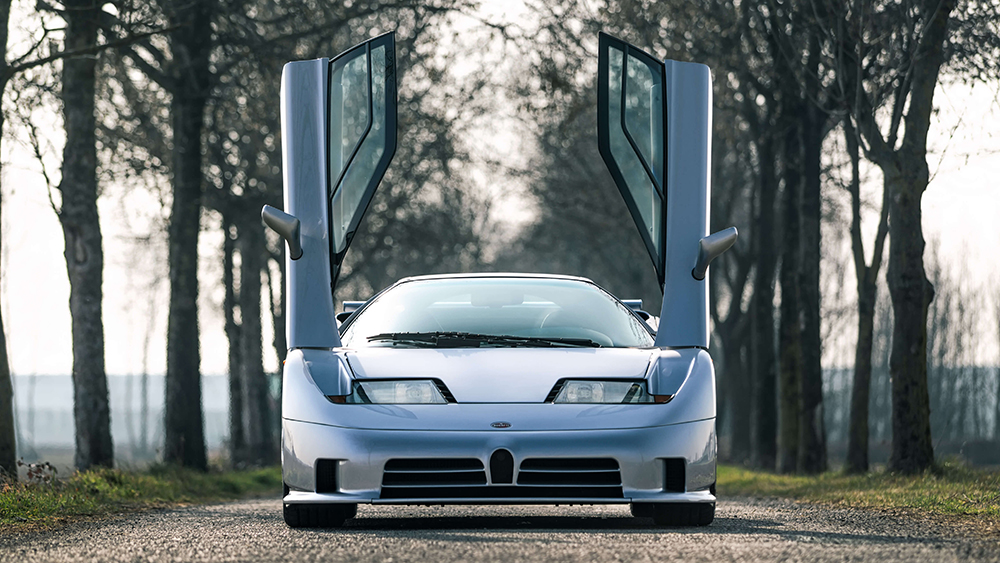 Bugatti just unveiled its most expensive car ever, the $19M La Voiture Noire, at the 2019 Geneva Motor Show, but that’s a one-of-one, and it’s already spoken for. If you’re looking for a more affordable Bugatti that’ll still stand out amongst the crowds, a rare gem just popped up for sale at Girardo & Co.’s website: the last Bugatti EB110 Super Sport ever built.

This vehicle, clad in Grigio Chiaro (metallic silver) was built in 1995, and is being advertised as very low-mileage. The last recorded number from the odometer was 702 miles, back in 2003, but the Bug looks pristine, inside and and out, so it’s safe to assume not much driving was done by the current owner.

Here’s hoping that owner did at least stretch the EB110 Super Sport’s wheels just a bit. The Super Sport emerged about a half a year after the EB110 GT arrived, in 1992. The 553-horsepower GT was the first new Bugatti to bear the iconic badge in more than four decades, and was designed by Italian entrepreneur Romano Artioli, who’d swooped in around 1987 to snap up the withering supercar brand.

The Super Sport was a GT on steroids. It received a new ECU, bigger injectors, and a more flowing exhaust, all of which helped the 3.5-liter quad-turbocharged V-12 get up to 603-horsepower with 408 lb-ft of torque. The Super Sport shaved off some 330 pounds from the GT, and in concert with a number of aerodynamic tweaks to the front and rear, the Super Sport shot to 60 in 3.2 seconds, and had an then-unheard of top speed of 220.6 mph.

Because of all of those stunning specs—and because only 30 EB110 SS units are believed to exist—it’s unsurprising that Girardo & Co. require applications for purchase before it discloses the asking price. Also driving up the value? This is the last SS built. Assume a price around $1.5 million, which is what concours editions of the EB110 SS typically fetch.