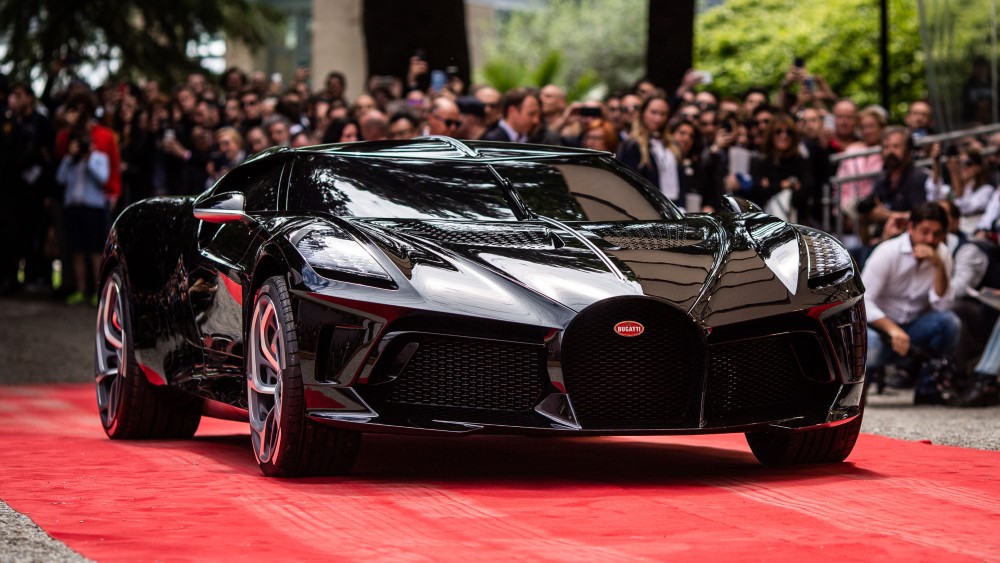 Serious car collectors know that Pebble Beach Concours d’Elegance, the industry’s most prestigious show, is where you go if you want to see the world’s rarest automobiles. And because of that, there is no better place for the most expensive new car of all time, the Bugatti La Voiture Noire, to make its U.S. debut.

Having been unveiled at this year’s Geneva Motor Show, and shown at Concorso d’Eleganza Villa d’Este in Italy in May, the one-of-kind hypercar will be on display on American soil for the very first time this week. At the time of its debut, the French automaker revealed that the sleek GT had already been purchased for $12.5 million (prior to taxes, bringing its total to about $18.7 million) by an anonymous buyer, setting a record for a new car.

The one-off La Voiture Noire, which translates to The Black Car, was designed as a tribute to the Bugatti Type 57SC Atlantic from the 1930s, one of auto history’s most iconic vehicles. Still two-and-a-half years from completion, the Batmobile-esque hypercar packs a mighty punch courtesy of a stunning 8-liter, quad-turbo W-16 engine capable of producing 1,500 hp and 1,180 lb-foot of torque. That kind of punch means the La Voiture Norie can go 0 to 60 in 2.5 seconds and hit a top speed of 261 mph. Hard as it may be to imagine, Bugatti reportedly limited the car’s speed to give it more touring refinement.

“We produced a true one-off, a single unit car that we call automotive haute couture,” Bugatti design director Achim Anscheidt told CNBC. “It’s not just a car anymore, it’s really more like a piece of art in line with the highly exclusive fashion and luxury brands in France.”

Indeed, the La Voiture Noire represents a significant step in the company’s return to its ultra-exclusive heritage. Though Bugatti has always produced vehicles in finite numbers, the last couple of years have seen the marque double down on limited-edition models. For example, the $5.8 million Divo, which was shown at Pebble Beach last year, had a production run of just 40.

Bugatti’s presence at Monterey Car Week won’t be limited to La Voiture Noire’s U.S. debut. While the company still remains mum as to the identity of the hypercar’s owner, the marque is also expected to announce a vehicle on Friday. Robb Report will publish details about the new car as soon as details are revealed.