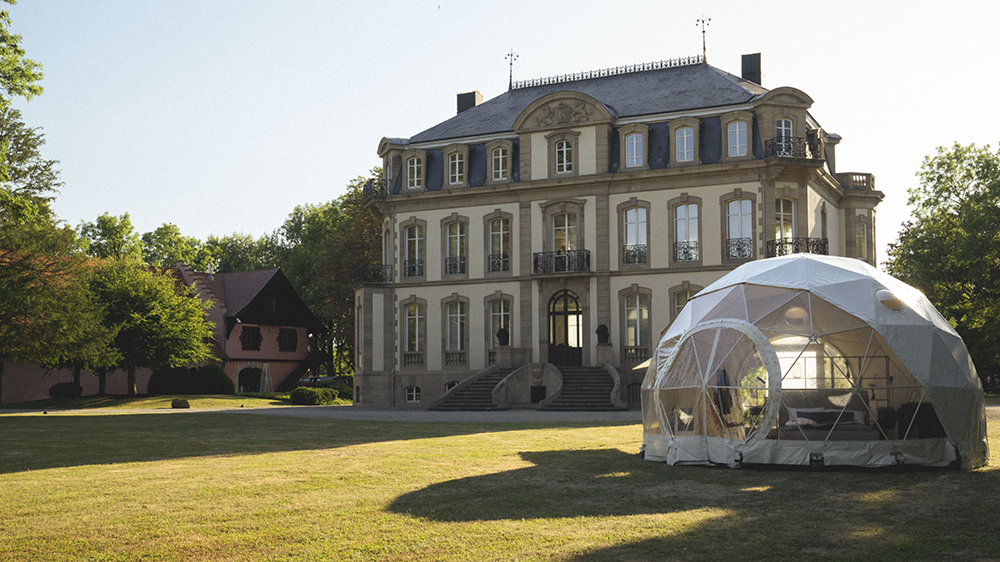 In the wee hours of a balmy summer night in Molsheim, France, I view Jupiter glowing high in the evening sky from the grounds of Château St. Jean, which has anchored these roughly 17 acres for the past 165 years. I’m overnighting in the shadow of this storybook residence, purchased in 1928 by Ettore Bugatti, founder of the renowned French automaker. In the modern era, such a stay has never been available to anyone save the staff who guard the estate—an opportunity so rare, so tightly controlled, it requires leaving my passport at the security gate. Welcome to the Bugatti bubble.

The brand’s headquarters weren’t always off-limits: Ettore was known to host clients before they took delivery of their vehicles. Guests could also stay at Bugatti’s nearby Pur Sang hotel, as did model, dancer and Grand Prix racer Hellé Nice when she took possession of her custom-built Type 35C racer in 1929.

My accommodations, unlike those of Ms. Nice, comprise a geodesic structure just beyond the château; think glamping, ornamented by Bugatti-branded furnishings and a self-contained climate-control system. Intriguingly, this once-in-a-lifetime Molsheim experience is being vetted as a potential customer program that would resurrect the days when acquiring a world-class automobile might also include a stay at the equivalent—in the automotive world at least—of hallowed ground.

Upon arriving by car service, I settle in with coffee and snacks, impeccably prepared by Bugatti’s private chef. In the design studio, the team offers an exclusive preview of the final Chiron to go into production, a special-edition open-air variant that won’t be seen by the public for weeks. Later, in Ettore’s glass-walled Orangerie, I peruse examples of the brand’s current partnerships, including a $300,000 carbon-fiber pool table by IXO Carbon and, in the Remise Sud area, a Tidal audio system with speaker enclosures that mimic the marque’s swoopy bodywork. (The afternoon culminates with a tasting of three vintages of Carbon Champagne, a bubbly co-branded with Bugatti that features glass bottles encased in a carbon-fiber weave.)

Of course, befitting the setting, Bugatti’s historical designs are also on display—and not just the automotive kind. Along with one of the six remaining Royale Type 41 models, with sheet metal that seems to stretch for a mile, I’m able to study an improbably beautiful writing desk crafted by Ettore’s father, Carlo. But for sheer thrill, it’s hard to top the chance to take a 1932 Bugatti Type 51 roadster for a spin around the grounds, its lithesome proportions countered by a cacophonous, supercharged straight-eight engine—a remarkable time capsule of mechanical mayhem.

Bugatti reps are cagey about whether any future client program might include such rarefied experiences; configuring the château even for small-scale tourism, they admit, would be “complicated.” But it’s clear the brand realizes the incredible resource it has at its disposal, and is looking to utilize it.

A spin in a 1932 Bugatti Type 51 adds to the rarefied air.  Enes Kucevic Photography

“The Bugatti château was purchased by Ettore Bugatti in 1928, but never with the intent of living in it,” notes Cedric Davy, COO for Bugatti of the Americas. “He wanted a grand location to entertain and inspire the world’s wealthiest customers, even royalty.” Davy says that when the Volkswagen Group bought the rights to the Bugatti name in 1998, “the first task was to purchase the original grounds and properly resurrect the brand from this foundation.”

And there may be no more interesting time to be a guest of Bugatti. The recent union with EV juggernaut Rimac Automobili means that Molsheim’s petrol-fueled soul will soon be electrified, even as the château and the macron-shaped atelier, where cars are hand-assembled at a pace best described as “deliberate,” will continue to operate. The unique hospitality trick, as current management well knows, will be living up to Ettore’s famous saying: “If it is comparable, it is no longer Bugatti.”