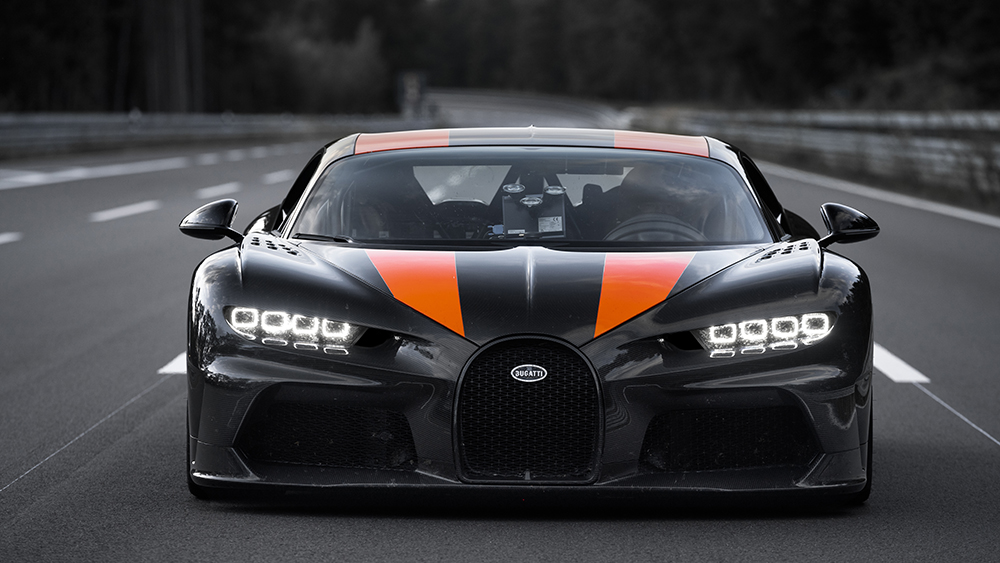 We all know the elemental facts about supercar-maker Bugatti. It doesn’t sell anything for less than two commas. A slightly modded iteration of its 1,500 hp Chiron just set the record for speed at 304 MPH, becoming the latest “near-production” car to cement membership in the minuscule 300 Club. Its one-off, La Voiture Noire, set records after selling for $19 million (to a still-mysterious owner). Its Type 57 SC Atlantic Coupe is arguably the most beautiful car built and, with a mere three left in existence, demonstrably one of the most expensive at $40 million per vehicle. Recounting the fundamentals are child’s play, though. How many of the following 14 tidbits of Bugatti trivia did you know?

Founded by Ettore Bugatti in Molsheim, France, Bugatti has been pushing the boundaries of physics and engine capabilities in pursuit of speed since 1909. In 1939, one of its early engines started a sizable fire due to a testing explosion. Reportedly, the surrounding area was in peril of being engulfed as well. In 2001, when testing the first Veyron engine, that 1,200 hp mill allegedly generated enough heat that the factory building was in danger of being scorched.

The Veyron was a giant pipe dream that nearly didn’t come to fruition.

When Volkswagen’s Ferdinand Piech (grandson of famed Ferdinand Porsche) bought Bugatti back in the late 1990s, he had already been dreaming of a 1,000 hp super machine. His engineers had previously told him this would not be possible. Along came the Bugatti platform and his vision was realized several years later when the Veyron officially launched in 2005.

Three radiators handle the engine, while another trio tackles the air-to-liquid intercoolers, a separate unit for the air conditioning, another specifically modulates the engine oil, and yet another cools the transmission oil. One final radiator is dedicated to the differential oil. Each radiator takes 15 hours to construct, meaning the whole shebang takes nearly four weeks to complete the requisite 150 hours of labor.

An unadulterated, full speed run in the Veyron would only last 15 minutes and would cost more than $42,000.

Technically, you’d only make it 12 minutes, because the 26.4-gallon fuel tank would be empty at that point. However, even if you had enough road—the Veyron can do 253 mph, meaning it covers 4.21 miles a minute. You would need 50.6 miles of road to keep your foot buried for 12 minutes. But the Veyron’s tires wouldn’t last. They’re only good enough for running at 250 mph for about fifteen minutes. After that, Bugatti would need to swap them for a new set, which reportedly will set you back a whopping $42,000.

Bugatti lost a heap of money making the Veyron, reportedly about $6 million per unit.

The total cost to produce the Veyron’s 450 examples amounted to about $1.62 billion, the bulk of which was research and development. Even selling some special versions of the Veyron for as much as $3 million per car couldn’t help recoup those ginormous losses.

It’s not just a cool-sounding name drummed up by marketers around a whiteboard. Pierre Veyron was a champion race driver between 1933 and 1953, notching plenty of victories, including several for Bugatti (most notably the 1939 24 Hours of Le Mans where he piloted a Type 57S). Veyron became a test driver for Bugatti in 1932.

Michelin had to make special tires for the Chiron’s 300-mph record-setting run.

The most restricting—and dangerous—element of a top speed trial is the tire the car is running. For the Chiron’s 304 mph sprint, Michelin took its Sport Cup 2 shoes and wove stronger metallic threads into the rubber. Exhaustive testing at speeds of up to 317 mph was conducted long before the shoes were fitted to the Chiron, and each tire was x-rayed after to find any imperfections.

The Chiron could’ve gone faster if it was tested at a higher elevation.

The modded Chiron’s 304 mph speed isn’t the car’s ceiling. It was actually still gaining speed when test pilot Andy Wallace had to back off the throttle to enter an upcoming turn safely. The run was purposefully completed at Volkswagen Group’s Ehra-Lessien test track in Germany because it’s relatively near sea level. Had the Chiron run in Nevada, where Koenigsegg chose to set a 278-mph record in its Agera RS, the lower air pressure and density due to the higher elevation mean the Chiron would’ve been 15 mph faster—at least according to reps for Bugatti.

Bugatti claims that if all the carbon-fiber elements of a single Chiron were disassembled down to individual strands and connected end-to-end, it would total 2,150,100 miles. For reference, that’s about nine times the distance from the Earth to the moon (238,900 miles) or enough to wrap around the Earth 86 times.

Catalytic converters are required on all vehicles to snag dangerous particulates from the exhaust system. Your daily driver likely employs one, so naturally, the Chiron uses six. If you add up all the surface area of the honeycomb catalyst material in the half-dozen units, you’d have about 2,478,562 square feet, or about 25 New York City blocks (using the average measure of 100,000 square feet per block).

How do you stop a 1,500 hp, 4,500-pound Chiron when it’s cooking along at 261 miles an hour? Phenomenal brakes. Those eight-piston titanium monobloc brake calipers are the first calipers to be produced on a 3-D printer. Not only are they lighter by 40 percent than traditional aluminum brakes, but they’re also the largest and most powerful brake caliper fitted to a production car.

The new Centodieci is a modern interpretation of the iconic EB110.

The EB110 emerged in 1991 and set the automotive world ablaze. It’s the only Bugatti model produced in Italy and set four world records, including the fastest acceleration, the fastest series production sports car, the fastest sports car running on gas, and the fastest series production car on ice. Bugatti decided to pay homage to that (brief) period when its factory was in Italy, and so the Centodieci (Italian for “110”) emerged this year. Unlike traditional modern Bugattis that feature a teardrop design, with an overall swooping line that starts higher in the front and tapers down in the rear, the 1,600-horsepower Centodieci—built on the Chiron platform—retains the original wedge shape of the EB110: low in the front, higher in the rear.

The Centodieci’s taillight took six months to design and build.

Engineers claim that the beautifully detailed and intricate taillight on the Centodieci was the single longest portion of the design and development process, requiring about a half a year. The challenge was creating a three-dimensional effect that was functional and striking.

Bugatti will put diamonds in the speedometer.

If your multi-million dollar Bugatti isn’t expensive nor rare enough, the factory will gladly allow you to check a box to include one-carat diamonds into the speedometer. If you’re wondering why you’ve never seen a blinged-out Bugatti speedo, we are, too. It’s impossible to find a photo of one online and Bugatti remains mum as to how many customers have actually selected this option. All Chirons come standard with diamonds, though they’re somewhat hidden. Each of the four tweeters in the car’s Accuton sound system features a one-carat diamond membrane in order to offer optimum aural fidelity.