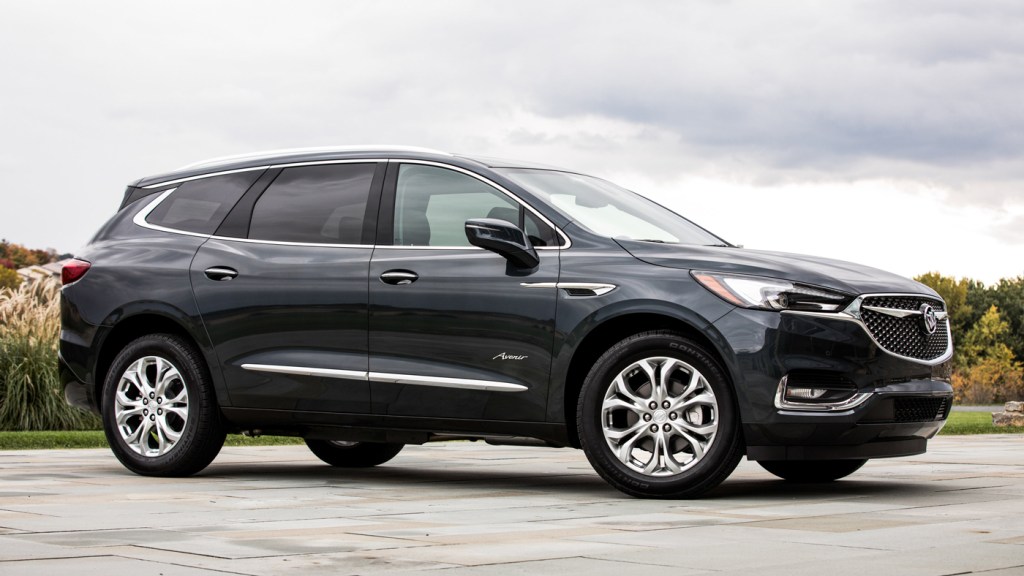 Founded in 1908, Buick is as rich in history as American automobile brands get. All the while, the marque has been known for its eminently comfortable and classy cars. Yet, unless we’re waxing nostalgic about some Buick convertible from a bygone era, or an interesting Buick something-or-other seen at a concourse event or vintage car auction, GM’s “premium mainstream” brand has been off our radar for a while—until now.

In an attempt to restore some of its former luster, Buick is introducing high-zoot trim levels of its nicer models that will collectively represent the most luxurious vehicles Buick has ever offered. And rather than saddling its new super-premium models with some meaningless acronym suffix, Buick’s has created a sub-brand for them that will be denoted by an actual name: Avenir—French for “future.” And for one offering under Buick’s badge, the 2018 Enclave crossover, the future is here.

The Enclave Avenir is powered by a 310-hp, 3.6-liter V-6 engine that is managed by a 9-speed automatic transmission.  Photo: Courtesy Buick.

Buick’s first Avenir is perched atop the Enclave’s four-model range, while a Lacrosse Avenir is due early next year. Wondering if the Avenir sub-brand could do for Buick what the Denali has done for GMC—namely attracting well-heeled, fashion-conscious customers—we recently joined Buick in Los Angeles, where automobiles are rolling fashion statements as much as tools for transportation, and where luxury SUVs almost outnumber the city’s iconic palm trees. Here’s what we learned.

First, from a purely aesthetic standpoint, the voluptuous, three-row Enclave Avenir is impeccably dressed. The thing is, so is every other 2018 Enclave. The only significant visual differentiators are a black chrome mesh grille, standard 20-inch wheels of a different design than the optional ones on lesser Enclaves, and some Avenir badging. At initial glance, there is little to suggest that one is beholding one of the most well-appointed Buicks in history. Interestingly, while standard Enclaves are available in 10 colors, the Avenir’s “curated” palette offers just five: black, white, gold, and two grays—all metallic.

The story is similar inside, where the Avenir treatment simply makes the Enclave’s already quite comfortable confines a bit more so with a stitched leather dashboard, genuine mahogany steering wheel trim, and more appearances of “Avenir” script to remind one that they’re in the super-deluxe model.

The Enclave Avenir comes standard with certain features that exist only as options on other Enclaves. These include a panoramic sunroof, a navigation system, a rear camera mirror, and surround view parking cameras, plus Avenir-exclusive wireless device charging. Oh, but you’d better like brown leather upholstery, because that’s the only way it comes.

There’s even less daylight between the Avenir and other Enclaves from a driving standpoint. All use the same 310-hp, 3.6-liter V-6 to get up to speed quickly, with a 9-speed automatic transmission managing shifts. Our tester rendered most road surfaces glassy smooth with its active shocks, available only on the Avenir, allowing it to waft along with Bentley-like composure. And it’s quiet, oh so quiet, cabin makes it better to hear the nuances of your favorite music as played through the 10-speaker Bose sound system.

The Enclave Avenir is a lovely enough conveyance that could and should be considered absolutely on par with the upcoming three-row RX350L from Lexus. And although the price—even with all the boxes checked—barely tops $60,000, perceived value should not be prejudiced. The Enclave Avenir represents Buick’s mindful strides toward competing with leading luxury marques—and that’s a step in the right direction.