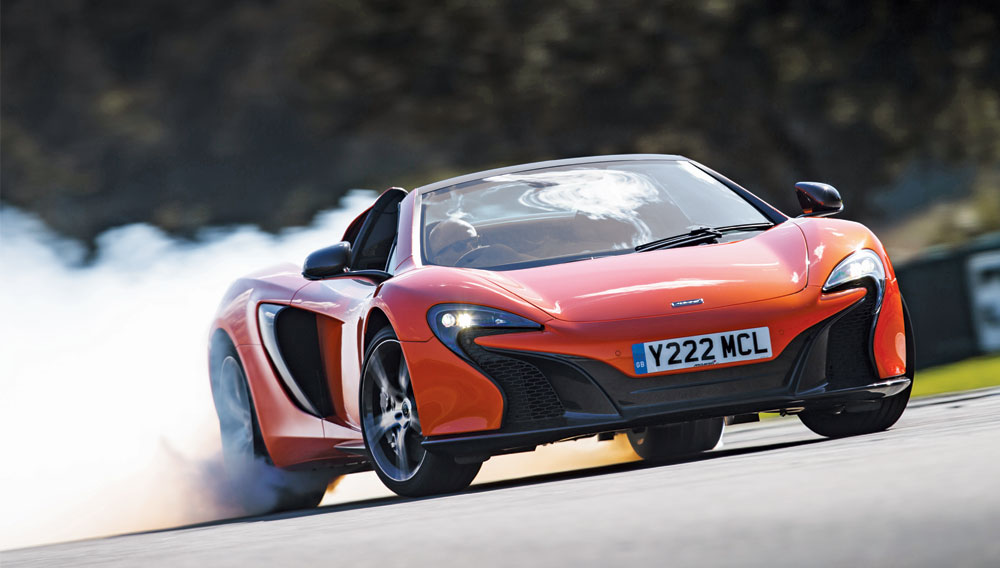 McLaren’s 650S retains the best parts of its predecessor, the 12C, and adds elements from the marque’s P1 supercar.

McLaren’s status with car enthusiasts is such that the British brand sold out three years’ worth of production of its MP4-12C sports car shortly after introducing the model in 2011. That was about 3,000 examples of a roughly $240,000 vehicle that no one had ever driven. Being closely associated with a Formula 1 team that at last count had won 182 races, 12 drivers’ championships, and eight constructors’ championships is apparently good for a carmaker’s reputation. Being involved in the development and production of the benchmark McLaren F1 and Mercedes-Benz SLR McLaren road cars has also earned the marque some fans.

Successful as the 12C has been (the MP4 was eventually dropped from the name), McLaren has moved on to its next model. “The 12C was really our first road car, and already it is not enough for us,” says Chris Goodwin, the auto racer who serves as the company’s chief test-driver.

The new car, the 650S, retains 75 percent of the 12C’s components, making it more of a refresh than a full-on replacement. “The 650S stands on the shoulders of the 12C,” says McLaren’s marketing and communications manager, Hud Giles. “We’ve taken everything that the 12C did well and improved upon it.”

McLaren is producing the 650S as a $265,500 coupe and a $280,225 hard-top spider. The drop-offs in performance, stiffness, and drivability between the coupe and spider are so negligible that the company expects the large majority of the examples sold in the United States to be spiders.

Like the 12C, the 650S is a rear-wheel-drive sports car built around a carbon-fiber tub that McLaren calls a MonoCell. The MonoCell weighs just 165 pounds and, according to the company, makes the car more rigid and safer—in addition to lighter—than vehicles with steel or aluminum frames.

The 650S is powered by a mid-mounted 3.8-liter twin-turbo V-8, as is the 12C. However, the 650S’s engine has lighter pistons, re-ported heads, revised cam timing, and larger exhaust valves for the turbochargers, all of which enhance the V-8’s power—as with a well-trained athlete, more efficient breathing improves performance. The engine produces 641 hp (or 650 Pferdestärke, the European standard for horsepower and the measurement that gives the car its name) and 500 ft lbs of torque, which is 25 more horsepower and 57 more foot-pounds of torque than the 12C’s engine generates. The 650S can reach 60 mph from a standstill in 2.9 seconds—faster than the Ferrari 458 Spider. Top speeds are 207 mph for the coupe and 204 mph for the spider.

In addition to a re-engineered motor, McLaren gave the 650S a front fascia that is more aggressive-looking and more eye-catching than the 12C’s. The design, which resembles a sneer, derives from the company’s P1 supercar. The 650S’s Alcantara interior, LED headlamps, and carbon-ceramic brakes also come from the P1.

Following the 650S’s official debut at the Geneva International Motor Show in March and its U.S. launch the next month at the New York International Auto Show, McLaren invited a group of writers to the Mazda Raceway Laguna Seca in Monterey, Calif., to test-drive the car on the 2.2-mile, 11-turn track. There, they could experience the car’s high-performance capabilities and test such features as McLaren’s Brake Steer, which is banned from Formula 1 racing because of the competitive advantages it provides. It allows the driver to brake later when entering a corner and accelerate earlier when leaving it.

Unfortunately, McLaren brought its British weather along with its cars, but the wait for the morning fog to burn off and the dew-soaked track to dry created time to test the 650S on the streets of Monterey. The drive became a test of patience when the 650S got stuck behind a truck that was traveling 30 mph up a twisty canyon road with no passing lanes. But at least the ride was comfortable. The cabin’s Alcantara-covered seats and flat-bottom steering wheel are fully adjustable and can create plenty of room for a 6-foot-tall occupant.

Drivers and passengers large and small may have difficulty getting in and out of the car because it is just under 4 feet tall, but none will suffer the headaches occasionally caused by the sensor hidden behind the panel of the 12C’s driver’s-side door. While the absence of a handle created a clean look, sometimes the sensor would fail to register the driver’s touch and would not open the door. The 650S’s scissor-style doors feature a small black button that does not require a magic touch to operate.

Starting the 650S is also a simple process—as easy as starting a Prius. With the key fob in your pocket, you press the start/stop button. It illuminates, and the engine fires up with the snarl expected of an exotic sports car.

The slow ride behind the truck provided time to enjoy the optional seven-speaker Meridian audio system and to test two of the car’s three power-train settings: Normal and Sport. A test of the Track setting came later, after the weather cleared and Laguna Seca opened. Toggling between Nor­mal and Sport revealed how well the latter setting enhances the throttle response. Sport mode also noticeably quickens the shifts in the car’s 7-speed dual-clutch transmission, whether you use the steering wheel–mounted rocker paddle shifter to change gears or let the transmission operate fully automatically, which it did with an impressive smoothness in all three power-train settings. The automatic shifting points are programmed to change as the engine speed increases under acceleration instead of when the vehicle’s speed increases. The transmission’s shift timing is especially noticeable at low speeds, but driving the 650S at 30 mph is like keeping a cheetah as a house cat. The car needs to run free and fast.

When the 650S was driven at high speeds at Laguna Seca later in the day, the advantages of the suspension’s firm damper and spring rates were readily apparent. The front springs are 22 percent firmer than those of the 12C, and the rear springs are 37 percent firmer, which makes the car feel securely planted. A secure footing is a welcome attribute in a car that weighs only about 3,000 pounds (2,932 pounds for the coupe and 3,020 pounds for the spider).

Reducing weight adds quickness to a car, but it also can add instability. So in addition to giving the 650S a stiff suspension, McLaren incorporated several aerodynamic and technical elements from Formula 1 to increase stability. These include a deployable rear spoiler that automatically adjusts its angle according to the car’s speed. McLaren claims that because of its design and engineering, the 650S produces 40 percent more downforce than the 12C. That figure may not mean much to owners who are going to drive the 650S only on roads and highways. However, for those who plan to take their cars to the track, it means that challenges such as Laguna Seca’s notorious Corkscrew—a hard-left-hard-right combination turn with a 59-foot drop in elevation—will not be a problem.