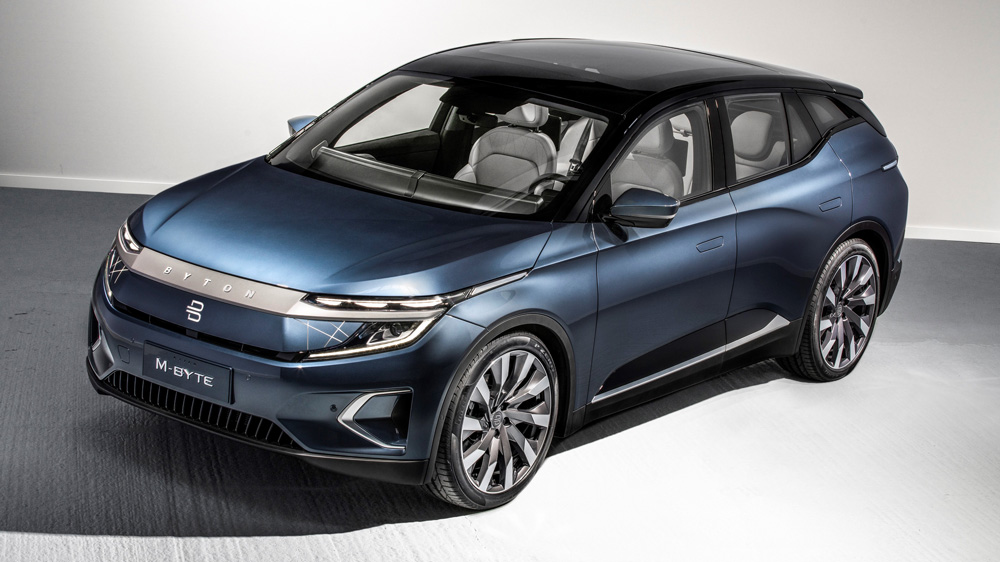 It’s been nearly two years since we saw Byton’s ambitious electric concept car presented at the Consumer Electronics Show in Las Vegas. Now, the Chinese startup is showing a “production ready” version of its M-Byte SUV, whose pièce de résistance is a 48-inch display screen that stretches across the entire dash.

The M-Byte design was led by Benoît Jacob, who previously worked at Renault, Audi and BMW, and whose credits include the concept and production versions of the BMW i3. “The motivation was really to address some essential questions about mobility, to bring innovation but in a very meaningful way,” Jacobs explains. “The goal was not to do a sports car that accelerates from zero to 100 mph in 2 seconds.” Jacobs says the small design team had a lot of freedom and, because of the limited space, did much of the modeling virtually.

The production-ready M-Byte is within millimeters of the concept, according to Jacobs. During a walkaround, he points to the SUV’s strong proportions and clean lines. “We tried to create a very reduced look,” he says. The result is a drag coefficient of 0.29 Cd., which is fairly slippery, although not as aerodynamic as 0.24 Cd achieved by the Tesla Model X. The front grille and rear bumper areas have lighting signatures that change colors to communicate different functions. When it glows green, for example, that means it’s fully charged. Jacobs notes the slim rear tail lights, which he says were particularly challenging to produce.

The highlight of the M-Byte is the interior, where the gargantuan display screen dominates the cabin. The concept version made extensive use of gesture controls, but the production vehicle scraps some of that for touch and voice commands. A tablet in the center console area makes it easy for passengers to reach controls, and another touch screen is integrated into the steering wheel. “The team was pissed with me when I chose the steering wheel design,” Jacobs once told fellow designers during a conference at the L.A. Auto Show. “They said it’s the most boring steering wheel ever. But sometimes you have to stop designing things if you want to achieve a good design.” Rear headroom and legroom were increased in the production-ready car, which the six-foot-three-inch Jacobs demonstrated to us by sliding into the backseat without any impediments.

David Twohig, Byton’s chief technology officer, tells us that both rear-wheel-drive and all-wheel-drive versions of the M-Byte will be available. The standard motor that powers the rear axle will make about 272 hp, and the AWD version will add a motor to the front axle for a total of about 408 hp. The latter, Twohig says, will go from zero to 62 mph in about 5.5 seconds, much slower than some of its competitors. Total range for the standard single-motor model is expected to be about 250 miles; a larger 95kW battery—standard on the AWD model and optional on the RWD model—will yield a range of about 325 miles.

Although the M-Byte doesn’t aim to break any speed records, what is striking about the team at Byton, compared to some other techie mobility startups, is that they are not just a bunch of digital computer geeks. These are real car guys. On a past visit to Byton’s Santa Clara headquarters, we saw little models of iconic cars such as the Porsche 911 and Lotus Elise set among the stereotypical Silicon Valley–esque workstations and standing desks. Some of the team talked about taking their own cars to the track, and one or two may have even admitted to pseudo-drag racing in a nearby empty parking lot. Why does it matter? Twohig says that, as enthusiasts, they understand that each type of car has its purpose and they won’t try to force the M-Byte into being something it’s not. “We’re really being intentional about not being a sports car,” he says. “No laps at Laguna Seca or the Nordschleife. I call that the fake sports car trap. We wanted to engineer an exceptionally comfortable car.”

Byton executives say they plan to begin delivering cars to the Chinese market in mid-2020, and in the US in 2021, later than originally anticipated. As with many startups, the road to production has not always been smooth. Byton co-founder Carsten Breitfeld—another BMW veteran—left the company earlier this year for Chinese electric startup Faraday Future, reportedly because he felt the Chinese government was exerting too much control over Byton. (FAW, China’s state-owned automaker, now owns about 15 percent of Byton, according to Breitfeld, and has loaned the startup hundreds of millions of dollars in funding.) But Twohig says he and the rest of the Byton team had enough structure and guidance from the erstwhile executive to keep the plan on target.

Byton plans for US deliveries of the M-Byte in 2021.  Photo: Courtesy of Byton.

“If [Breitfeld’s departure] had happened earlier we would have been in trouble,” notes Twohig. “But [Breitfeld] delegated a lot of technical stuff to me for a long time, so I knew enough of the history and the background that we were able to pick it up. Our timeline for rollout has slipped by about six months, but we want to get the cars right and not make a deadline just to make a deadline.”

Prices for the M-Byte will start at $45,000. Online reservations will open sometime next year.