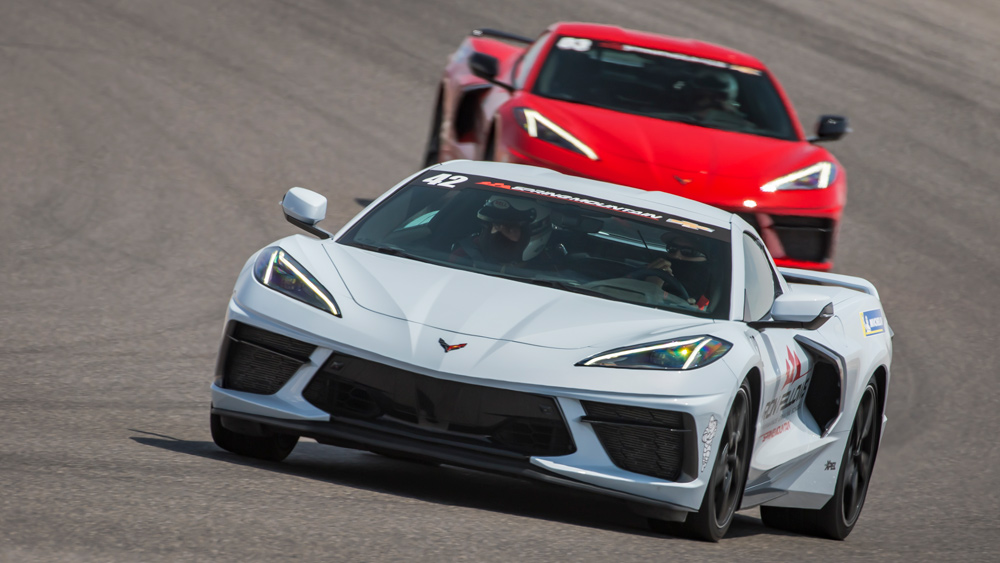 If knowledge is power, then an education in motorsport is basically added horsepower, especially considering that any substantial modification to the driver’s skill set is arguably the most important upgrade for any vehicle. There are heaps of great racing schools out there, but after recently going through the curriculum at Ron Fellows Performance Driving School based out of Spring Mountain Motor Resort and Country Club in Pahrump, Nev., I now have a favorite.

The Ron Fellows school is pretty similar to the BMW Performance Driving School I’ve previously attended. Both are conducted at motor resorts where luxury residences flank the track. Both offer “go-faster” instruction catering to varying abilities. And both are staffed with incredibly talented instructors. These racing schools were basically separated at birth. The only major difference is that at the BMW program you’re training in its eponymous cars, obviously. At Fellows, the official high-performance driving school of the latest Chevrolet Corvette, the mid-engine C8’s cockpit is your classroom. But that difference has nothing to do with why the ‘Vette school is my choice thus far.

It all simply comes down to duration. My BMW program was one day (though BMW also offers two-day instruction), and the Corvette Owners School is two days. In fact, all four of the ‘Vette programs that Ron Fellows offers are two days. Extended seat time gave my mind and muscle memory more opportunity for things to click. Of course, it didn’t hurt that my precision driving skills were still fresh from having recently completed the BMW school. Case in point, this proclamation from Ron Fellows instructor Payten Murphy at the beginning of my second day: “I’ve never seen a student get under 30 seconds [around the autocross] on the first try.” I consider myself a driver of unremarkable ability, so to receive an accolade like that speaks to the power of seat time . . . even passenger-seat time.

A chance to soak up insight from the passenger seat while the instructor leads by example.  Photo: Courtesy of the Ron Fellows Performance Driving School.

A couple of weeks before arriving at Spring Mountain, I put too many miles on my right Achilles tendon and busted it. I was walking without a limp by the time I arrived in Pahrump, but the first day of track exercises meant heavy use of my right foot for hard braking, leading to my limp’s inauspicious return. I opted out of left-foot braking as a bandage to the situation, so in the interest of preventing further injury, I decided to sit shotgun for the second day of lead/follows—and I’m so happy I did.

Riding with the instructor while he led students on track showed me the effectiveness of slowing down. When you’re behind an instructor on a lead/follow lap, it’s natural to try driving as fast as possible, but for a budding racer, that’s the opposite of what you should do. I’ve been taught “slow in, fast out” of corners for most of my life. I’d be Silicon Valley–rich if I had a dollar for every time I’ve heard about smoothness winning the race. I’ve experienced numerous racing-driver hot laps, witnessing first-hand how the speed sausage is made. But all that stuff didn’t really click until riding along with a leader on a track exercise where I’d already followed. It was astounding to see how light my instructor was on the brakes, especially before corner entry. That part felt slow, but then because of the extra settlement time in the braking zone, the Corvette was better set up to devour the turn. As a result, my instructor’s cornering speeds were about 10 mph higher than mine, and that speed was achieved in a manner that appeared Sunday-drive easy.

Something else astonishing was learning that during lead/follows, the racing instructors are peering into their rearview mirrors roughly 80 percent of each lap to keep track of the students behind. And they’re leading the pack with only one hand on the steering wheel, while the other hand managing two walkie-talkies; one for student comms and the other to communicate with supervising instructors. That’s talent.

The efficacy of passenger-seat time  really became evident to me two weeks later when testing out the new Subaru BRZ at Lime Rock Park, the racetrack synonymous with the racing side of actor Paul Newman‘s career. I’d wanted to drive this hallowed facility for years. Getting to rip around Lime Rock was a dream come true, but the deal was sweeter knowing I had that Corvette training under my belt. There’s minimal runoff at Lime Rock, so there’s little room for error. A few months earlier, that would have made me really nervous, thus detracting from my enjoyment. With the Corvette Owners School experience in my back pocket, though, I was able to drink larger gulps of Lime Rock’s greatness.

With my Achilles now healed enough for track duty in the BRZ, I got to practice my brake lift-off technique into corners so that I could maximize my front-end grip on turn-in. Towards the end of the day, I asked Lime Rock’s track ace Paul to ride along with me for some added coaching. After my first lap or so, he asked, “Who taught you how to lift off the brakes like that into corners?” I told Paul about my Ron Fellows training two weeks earlier, and he was pleased with my results, enthusiastically commending me at the end of our session.

Another parallel between Corvette Owners School and BMW Performance Driving School is that both programs have autocross time trials. I came in second place out of six students in BMW’s program, but out of 14 Corvette Owners School entrants, I was crowned autocross champion. Again, I’m nothing special behind the wheel, so if I can be no.1, almost anyone else can be, too. It’s all in the training, and that’s why I wholeheartedly believe performance driving school is something for every licensed driver.

Corvette Owners School retails for $3,695, not including room accommodations, but when you buy a brand-new C8 Corvette, your tuition is slashed to $1,000, and that includes a one-night stay in a Spring Mountain trackside condo. The three more-advanced Corvette programs range from around $4,000 to $5,500 each, and rooms cost around $150 per night. But the return on investment is exponential. After it’s over, you’ll feel a little safer every time you get behind the wheel, and that peace of mind is priceless.