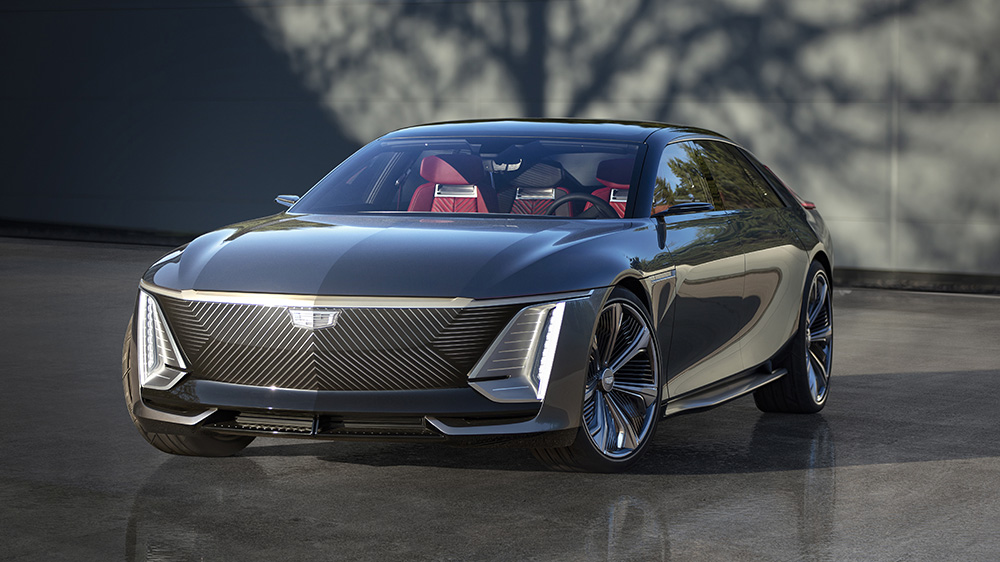 We now know what the future of Cadillac luxury will look like.

The Detroit automaker unveiled a “show car” version of its upcoming six-figure electric flagship, the Celestiq, on Friday. The brand isn’t ready to share technical details yet, but it’s hard not to be impressed by what we’ve seen so far.

The battery-powered show car is technically a concept, but the automaker says it’s pretty close to the final version that will be hand-built at GM’s Global Technical Center. That’s great news because the pre-production Celestiq is gorgeous. It has a low-slung design inspired by the bespoke V-16-powered coaches of the prewar era and the hand-built 1957 Eldorado Brougham. Two standout detail are its roofline, which tapers into a rear hatch and gives the EV a particularly dramatic fastback profile, and a razor-sharp lighting package. The sedan has some elements in common with the Lyriq crossover, including its illuminated grille and sculpted shape, but it looks so much sleeker and more elegant than the brand’s debut EV.

Inside the Celestiq show car  Cadillac

The EV’s four-seat cabin is equally stylish. The Celestiq’s interior resembles a retrofuturist spaceship thanks to its Eames chair-inspired seats and a dashboard-spanning, 55-inch LED display with a digital privacy curtain so that the driver can’t see what their passenger is watching. Those in the rear each get a touchscreen of their own on the back of both front headrests, as well as another on the center console. There’s also a “Smart Glass Roof,” which is split into four zones, each of which offers customizable levels of transparency and lighting for everyone inside the vehicle. Everything that is not a screen is covered in metal or red leather.

“We’ve combined the beauty of function with the beauty of form,” Laetitia Lopez, creative designer for Cadillac Color and Trim, said in a statement. “We had to reconsider all aspects to immerse the customer, all of their senses, and create a connection with the vehicle through the finest genuine materials, exceptional detailing and advanced technology.”

Friday’s reveal didn’t include any details about the sedan’s powertrain, though we do know that it will be powered by GM’s Ultium battery technology. Cadillac also confirmed that the EV will feature Ultra Cruise, the next generation of its hands-free driver’s assistance software.

In addition to those details, we’re still waiting to find when Cadillac’s hand-built flagship will launch and how much it will cost. Around the time that the brand released the first teaser images of the EV last month, The Wall Street Journal reported that it could go into production late next year and would likely start at around $300,000, easily making it the most expensive vehicle in the marque’s history. That would put it in competition with cars built by Rolls-Royce and Bentley. Only time will tell if it can live up to their lofty standards, but we feel pretty confident in saying that it will at least look the part.

Click here to see all the photos of the Cadillac Celestiq show car.