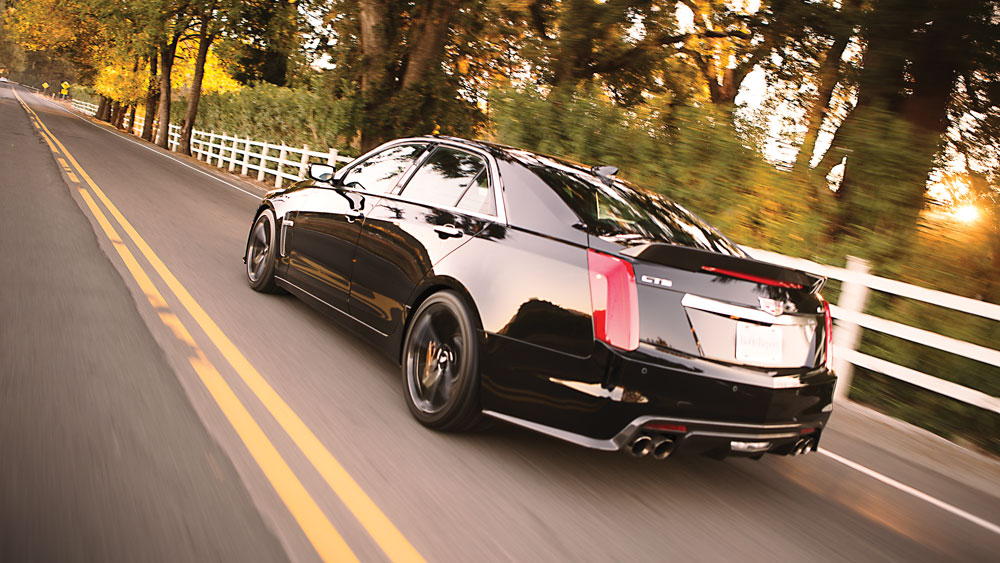 The most powerful Cadillac ever built is really three cars in one: a 200 mph track monster, a great canyon carver, and a perfectly reasonable daily driver. While it seats five and coddles its occupants with Recaro seats (which were too tight for some) and plenty of high-tech features, the real excitement starts under the hood and expresses itself through some good old-fashioned rear-wheel-drive power. Plenty of aerodynamic aids at the front and rear, including lots of carbon fiber, make this the most aggressively styled Caddy ever.

A few drivers likened the CTS-V to a four-door Corvette, as the Caddy uses essentially the Z06 ’Vette engine (down just 10 hp) to sling gobs of torque, all voiced through a quartet of fat exhaust pipes. Brian Davis “broke the back end loose without trying,” and David Bowman likened the CTS-V to a “Detroit sucker punch.” Kris Combs unapologetically called it the “best sports sedan of them all. I didn’t expect to like this car. Power, handling, exterior boldness, at a reasonable price.” Drivers like Scott Sullivan were impressed by the value, too, observing, “You get a lot of car for the price.” Randy Nichols called it an “all-around solid car at a very reasonable price.”

But with such high-end competition, especially from the Germans, the Cadillac had detractors who found finesse, fit, and finish lacking, especially on the inside. “Why can’t they make an interior that looks like an expensive car?” asked Steve Altman. “It looks so cheap.” There were plenty of negative references to plastic, the outgassing of which offended Mark Newman, who snorted, “Ten minutes in this car and the interior smell was making me gag.” Carlos Vidueira was more charitable, commenting that “it tries hard, but doesn’t seem to be able to overcome its Cadillac stereotype.” That stereotype included numerous references to a car built for Grandpa and Grandma, which may be more perception than reality, but suggests that there is more work to be done.