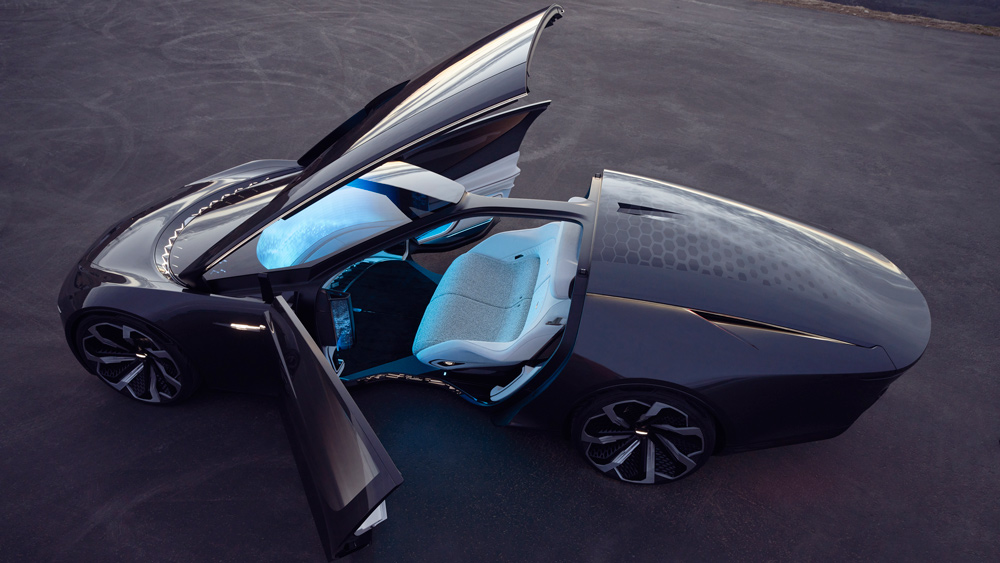 As with jet packs and flying cars, self-driving production vehicles are still more vaporware than reality, but major automakers continue to help us imagine what that future might be like. The latest to do so is Cadillac with its InnerSpace concept unveiled today at the 2022 Consumer Electronics Show (CES).

The marque’s new vision of an autonomous car prioritizes the cabin experience instead of the exterior—though this one-off’s bodywork is exceptionally easy on the eyes. While a number of lounge-like self-driving concepts feature nondescript, blobby exteriors, the InnerSpace presents an outer space that’s a flush, sweptback expanse more along the lines of the Audi Skysphere, Vision Mercedes-Maybach 6 and Pininfarina Teorema concepts than other members of Cadillac’s so-called Halo Portfolio. The latter includes the PersonalSpace single-seater VTOL aircraft, which was unveiled at last year’s edition of CES.

This time around, Cadillac has focused its efforts solely on two travelers seeking “space and serenity,” according to the automaker. Those passengers better be accustomed to digital comfort, because the InnerSpace’s low-slung cabin, which opens via two doors and a massive structure incorporating the A-pillars and glass roof, is equipped with wraparound surface-mounted LED displays intent on distracting from the potentially dystopian world beyond the glass. And Cadillac imagines entertainment and wellness-themed programming that integrates augmented reality to engage travelers. Using biometric interfaces, users will be able to engage the marque’s Ultifi software platform, which will be kept current via over-the-air updates that will also revise and enhance the autonomous technology as needed.

In addition, Cadillac touts Goodyear’s innovative tire tech as a way to further improve insulation from the outside world. Using soybean oil and rice husk–based silica in place of petroleum-based construction, the hoops utilize what Goodyear dubs SoundComfort technology to reduce soundwave resonance from the rubber. And should the occupants so desire, tire metrics such as pressure, temperature and load information can be accessed via the aforementioned screens—though that seems anathema to the theme of blissful escape.

The InnerSpace is built on Cadillac’s Ultium EV platform.  Photo: Courtesy of Cadillac.

Cadillac is mum on the real-world viability of such tech and has not disclosed any projected cruising range, but given the concept’s Ultium EV platform—which frees up cabin space by spreading batteries throughout the car’s structure—we’d anticipate more range than you might expect from a vehicle that looks like it’s going 200 mph while standing still. However, Caddy has more than a two-seater in its autonomous crosshairs, and is already teasing its next autonomous Halo concept. Dubbed SocialSpace, the follow-up to the InnerSpace will offer loads of sumptuous interior volume for up to six passengers, giving us even more to look forward to.