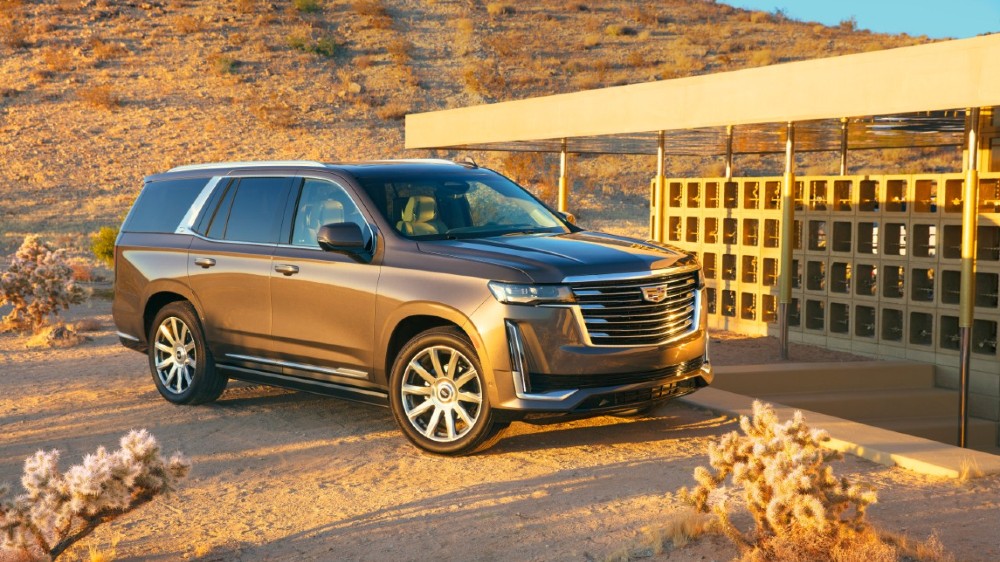 In the pantheon of luxury marques, Cadillac has never been known for its cutting-edge innovation. But if the American automaker’s fifth-generation Escalade is any indication, the brand might be ready to change that.

On Tuesday night, Cadillac unveiled its brand-new refresh of the 22-year-old full-size SUV. And while the entire vehicle has been given its first major overhaul in five years, the car’s new high-tech additions may be what really differentiate it from previous models.

Inside vehicle’s luxurious, quilted leather and real wood-accented interior, you’ll find a spate of new features. First, there is Escalade’s all-new 38-inch curved OLED infotainment display, which has twice the pixel density of a 4K TV, according to a press release. Made up of three displays, the system will allow drivers to monitor their journey, check on the status of their vehicle and also choose from a slew of entertainment options. The set-up will also allow drivers to engage the SUV’s second major feature, Cadillac’s Super Cruise semi-autonomous driving system. The level 2 autonomous driving system promises to allow the Escalade to travel for hours on highways without driver intervention. Finally, there’s an optional 36-speaker AKG audio system for audiophiles who require sound quality rivaling any home stereo system.

Inside the 2021 Cadillac Escalade  Cadillac

As with earlier generations, the new Escalade shares a platform and general aesthetic with GM’s other large SUVs, the Chevrolet Suburban and GMC Yukon. But while the new iteration doesn’t look terribly different from its predecessor, it does sport a sleeker and rounder design sure to remind some of the company’s Escala concept from 2016.

The Escalade has also been stretched a bit and is now 7.1 inches longer than the outgoing model. Combined with its new independent rear suspension, this gives the vehicle an added 11 cubic feet of space. Other tweaks include an even more prominent brushed-chrome grille and a striking new LED light package.

Underneath the hood, you’ll again find a small-block 6.2-liter V8, but it now makes use of GM’s Dynamic Fuel Management cylinder­deactivation system. Mated to a smooth-shifting 10-speed automatic transmission, the powertrain is capable of producing 420 hp and 460 lb-ft of torque. A 3.0-liter inline-six diesel engine will also be available as an option, which is a first for an American-made full-size SUV. That engine set up is capable of churning out 277 hp and 460 lb-ft of torque.

The new Escalade is set to make its public debut in April. While Cadillac has yet to announce an official launch date, most expect the car to go on sale in late 2020. As of yet, no pricing information has been available, but it seems likely that the SUV will start at a similar price point to the current-generation Escalade—about $77,000.

Check out more photos of the fifth-generation Escalade below: