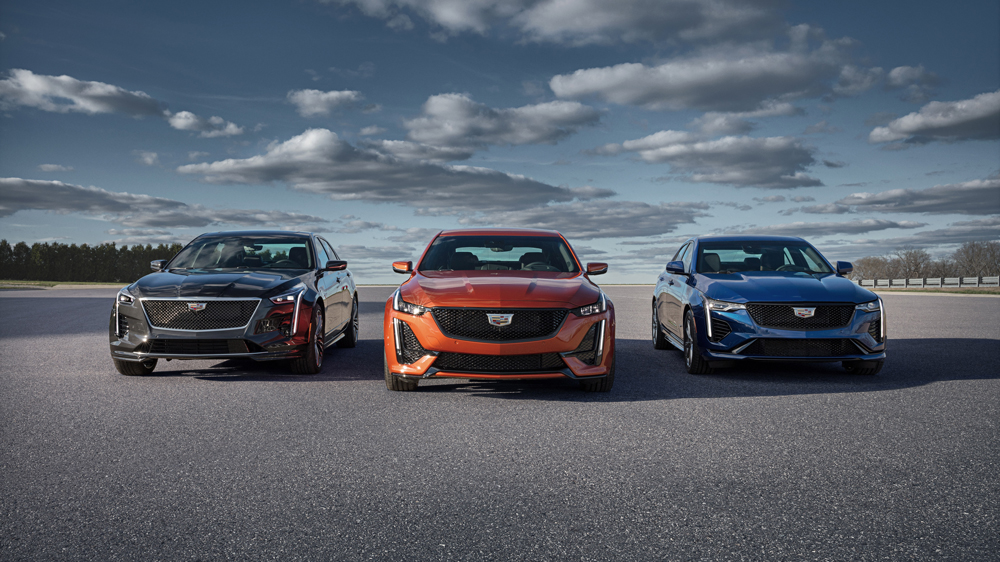 Cadillac revealed two new V models that aim to both satiate performance enthusiasts and attract a new breed of luxury consumers. The midsized CT5-V and the compact four-door CT4-V replace the CTS-V and ATS-V, respectively, and will compete BMW M, Audi RS, and Mercedes-AMG models.

During its lifespan of just 15 years, Cadillac’s V program has proven to be a serious contender with its road cars and race cars. In 2008, the CTS-V broke the record for the fastest production sedan at the Nürburgring (the racetrack in Germany long used to benchmark performance), and race-prepped versions of the CTS-V won several manufacturer’s championships in GT sports car racing.  Later, racing versions of the smaller ATS-V took to the track, and in 2017 Cadillac introduced its Daytona prototype (DPi), which won its first race at the Rolex 24 and continues to dominate its class in the IMSA Weathertech Sports Car Championship.

That’s all fine and well for those who buy cars based on lap times, but Cadillac has learned that in order to be successful, it must expand its appeal beyond the racing fans.

“Not everyone wants to take their car to the track. Most people just want to drive it every day,” General Motors’ President Mark Reuss told us. That’s a candid admission from the guy who pushed for many of GM’s performance and racing programs throughout the years. But with Cadillac’s sales slipping since 2016, the company is setting its sights on a wider swath of customers who care more about looks and luxury than they do horsepower.

To that end, Cadillac is using a dual-tier approach to its new V lineup: more modest offerings suited for daily driving, and higher-powered models for the die-hards. The entry 2020 CT4-V uses a 2.7-liter turbocharged four-cylinder engine that makes 320 hp and 369 ft lbs of torque, while the 2020 CT5-V uses a 3.0-liter twin-turbocharged V-6 that makes 355 hp and 400 ft lbs of torque. Both get a 10-speed automatic transmission, a stiffened chassis and GM’s Magnetic Ride Control adaptive suspension. The CT4-V will come standard with a mechanical limited-slip differential and, for enthusiasts, will most likely be available with a manual gearbox (although Cadillac isn’t officially confirming this yet). The CT5-V comes with an electronic limited-slip rear differential and will be available with all-wheel drive—a first for a V-Series car. As with the CTS-V, a rear-wheel-drive configuration will be the standard setup.

At this year’s Detroit Grand Prix, Cadillac also teased line-topping versions of both cars, which tore around the street course doing demonstrations laps while clad in camouflage. Although details have not been released, many speculate the CT4-V could run on a version of the ATS-V’s 3.6-liter V-6, and the CT5-V could get its larger sibling’s 4.2-liter V-8, codename Blackwing. The latter will power the upcoming CT6-V large sedan and is rumored to also appear in the new mid-engine Corvette C8 debuting in July.

Cadillac hopes customers will be wooed with both models’ designs, which feature softened, more subtle details from the bold “Art and Science” design language that defined Cadillac vehicles for the past several years. For example, signature vertical daytime running lights and tail lamps are much thinner than before. “We wanted to have a vehicle that reflects athleticism, like a world-class athlete in a fine tailored suit,” Andrew Smith, executive director of Cadillac Global Design told us during a walkaround. On the CT4-V, Smith pointed out details unique to the performance model, such as exhaust inserts coated with a metal alloy that oxidizes at high temperatures as the car is driven. “You have to drive [the car] to see it,” Smith says. “We call it the badge of honor.” Other design cues include a new mesh-grille insert that has been tested in the wind tunnel to be more aerodynamic, and a front badge that’s invisible to radar, which allowed engineers to put the radar unit behind the Cadillac crest, instead of the obtrusive sensors often visible on the front ends of today’s luxury cars.

Interior designers and color and trim experts worked together to bring high-quality materials and alluring shapes to the cars. On the CT4, interior design director Crystal Windham points out small details that add depth and movement, such as the center console. “Using contrast stitching on top and then having brightwork around the edge makes it look like [the console] is floating,” she tells us. She also notes how the perforations and sew-lines of the leather upholstery line up with and complement the highly contoured seats.

The CT4-V is the first of a forthcoming lineup of CT4 vehicles expected to debut later this year. Along with the CT5-V, the CT4-V will be available in dealerships in early 2020. Cadillac hasn’t announced pricing, but one of the brand’s compelling arguments has always been a lot of bang for the buck. Our guess? Cost for the entry models should fall well below those of the outgoing ATS-V and CTS-V (starting at about $68,000 and $87,000, respectively), while the higher-range models should be on par with, or slightly exceed, those figures.