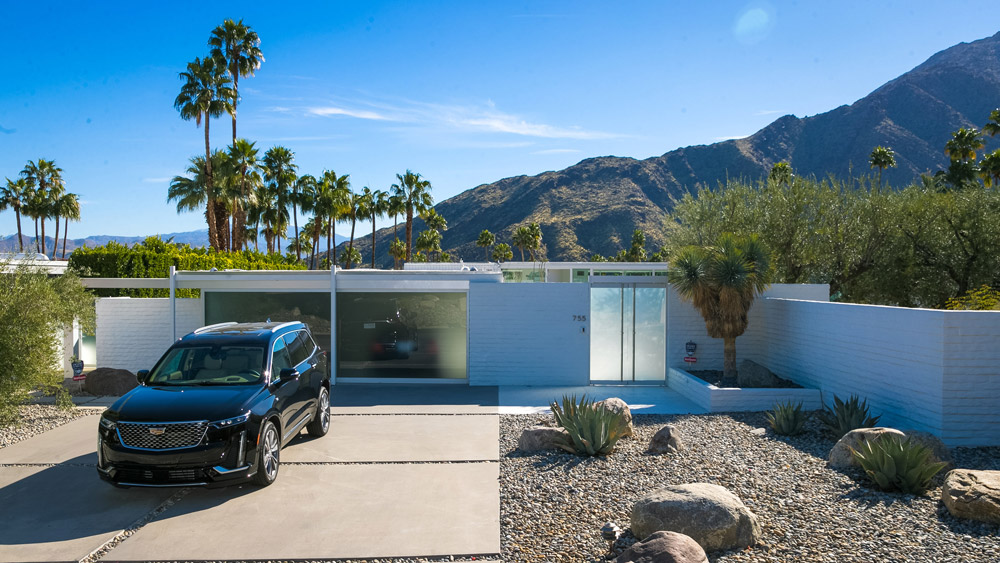 Palm Springs, Calif., is an attractive vacation destination for more than just warm weather and pretty sights. The town is a time capsule for the 1950s and ‘60s, and flaunts its celebration of the past with the world’s highest concentration of mid-20th-century building design and its abundant use of glass. Palm Springs, through its aesthetic, serves as a reminder of post-World War II optimism.

In the Twin Palms neighborhood, for instance, there are no street lights to be found. Street lights mean light pollution, which means an encumbered view of the night’s stars. At daytime, standing inside a 1957-vintage home designed by the late architect William Krisel, it’s hard not to stare at the nearby Santa Rosa Mountains framed through glass that itself soars to the ceiling. You can’t help but gaze up to the heavens in this town and feel the wonder of what space-race-era people must have felt when they discovered the sky was no longer the limit.

A Palm Springs residence accented with a line of Cadillac’s XT6 examples.  Photo: Courtesy of Cadillac.

“That marriage of form and function, and one not overpowering the other. It is very much a balance, a harmony,” Kapsis says of the city’s design disposition. “No one thing should drive the other. They have to be developed all at the same time.” Getting the basics right feeds into what Kapsis ultimately wants to achieve with a vehicle interior she helps craft.

“Something that is always in the back of my mind is the sort of experience someone’s having while they’re driving,” Kapsis explains. “Say they’ve had a really bad day. When they sit in their car they can unwind, relax, feel at home. That is something that I’m really proud of. It feeds into all of the things that we do.”

That philosophy comes through behind the wheel of the Cadillac XT6. The three-row crossover offers a conspicuous balance between form and function. The controls are easy to use and integrate well into the overall sweeping dash and interior design. Comfortable seats, posh materials and a smart adoption of available space further contribute to a pleasant cabin experience.

By no means could you consider the XT6’s interior design retro, but there is one spot in the cabin that harks back to mid-20th-century optimism. Any time I look at the cursive Cadillac logo that sits within the metal bezel surrounding the rear HVAC controls, I’m transported to a time when Cadillac was still the “Standard of the World.”

The three-row configuration’s balance of form and function.  Photo: Courtesy of Cadillac.

European brands like Mercedes-Benz and Rolls-Royce currently occupy the top tier of luxury, but perhaps one day, Cadillac will regain its status as the final word in opulence. I now see a new ray of optimism that the American company will.

The XT6’s spacious cabin and high-definition 8-inch screen as viewed from behind.  Photo: Courtesy of Cadillac.

If Cadillac were simply looking at its past to rekindle its bygone magic, that wouldn’t go far enough. Instead, the automaker is looking at the culture surrounding its heyday to find inspiration that could lead to a new era of world-beating wizardry.

Can Cadillac become the global standard once again? It’s hard to say at this point, but there is something virtuous about moving forward through self-reflection.