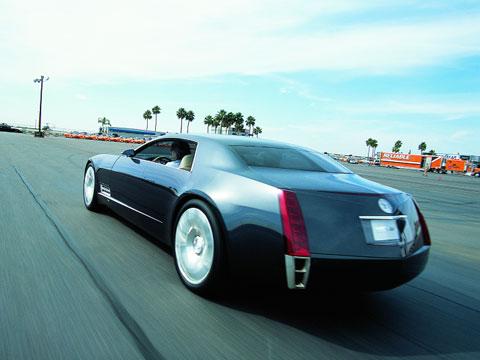 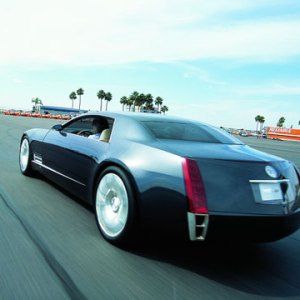 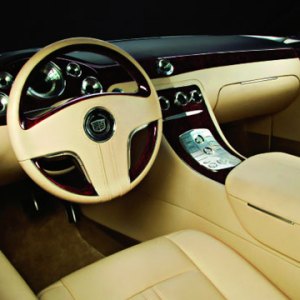 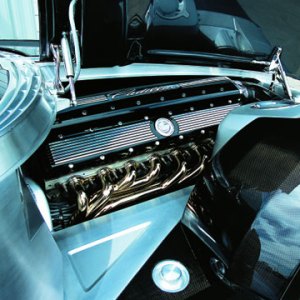 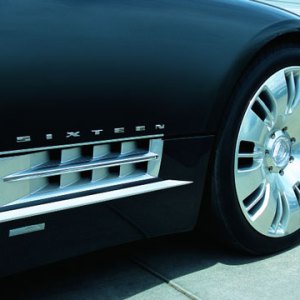 Concept cars always generate excitement, and none in this century has excited the public and press more than the Cadillac Sixteen. It is formal and elegant, quietly aggressive and state-of–the-art stylish, as different from a Maybach or Phantom as is a Brioni tuxedo from Savile Row pinstripes. The Sixteen may be the first truly beautiful sedan to appear since the Bentley S1 with Flying Spur coachwork by Mulliner, an impressive accomplishment for the GM division that intends to reestablish Cadillac as a world-class automobile brand.

But the Sixteen is far more than a styling exercise or a platform for the Jetsons’ latest automotive amenity. It is the perfect vehicular test bed for a powerplant that raises goose bumps on gearheads and the gorges of greenies. In an era when the price of entry into the power and luxury stakes is a V-12, the Sixteen ups the cylindrical ante by four. But for Cadillac, this is nothing new: Throughout the 1930s, the Standard of the World offered a 16-cylinder powerplant when most cars were 10 or 12 shy. And unlike most concept cars, the Sixteen is a genuine working automobile, with gauges that spin (literally), wheels that steer (all four), windows that operate, and everything in between.

So when the team at Cadillac asked us to take the first drive ever in their new creation, I put down my iced tea and ordered a Sapphire martini to toast their largesse and wisdom. But be careful, I warned: If this concept delivers on its promise, our readers will want to buy it.

A few weeks later, I found myself on a track in Phoenix, Ariz., accompanied by David Bolognino, GM Concept Vehicle project manager, and Hong Tran, the concept team’s electrical engineer and keeper of the car’s elaborate electrical secrets. These gentlemen made a special trip from Warren, Mich., to introduce us to the future of luxury and power à la Cadillac. The Sixteen may be a multimillion-dollar concept car (a specific inquiry about its cost was tactfully shunned), but it remains a very real car nevertheless. “It’s like no other concept car I’ve ever been involved with,” said Bolognino. “This is about as legitimate as they get. I mean, we put a ton of engineering into making sure the suspension, chassis, and power train were right and robust.

“The design brief read something like, ‘Ultra luxury, bring back some heritage of the V-16, but not in-your-face retro, not a cartoon,’ ” Bolognino added. Exterior designer Brian Smith hit the mark and created a shape both fresh and original. So many new cars are caricatures of themselves, gratuitously clutching at some historical design cue. “There were actually some tailfin sketches that came up,” Bolognino admitted, “and he [Smith] pretty much said, ‘Not on my watch, buddy.’ ”

The Sixteen was developed in the same market environment as cars like the Rolls-Royce Phantom and Maybach, which represent those companies’ ultimate visions of luxury. “You can’t help but compare this to those vehicles,” said Bolognino. “However, we made a conscious decision not to go there. No TV, no computers. That’s not what this car is about. It’s a car that you go out on the weekend and have some fun with. One thousand horsepower. At the same time, it’s a chauffeured car—about sitting in the backseat, looking at the speedo and tach, listening to the engine, and being ‘the guy.’ ”

It was my turn to be “the guy.” We climbed in and got comfortable. Very comfortable. Associate Editor Christian Gulliksen assumed the captain-of-industry position in the right rear, without question the best seat in the house. When unoccupied, the front passenger seat can articulate to become the lower half of a full recliner for such a captain. The Sixteen’s all-glass roof and capacious interior allow both rear passengers a panoramic view of the road, bettering even the Maybach in this regard. Up front, Bolognino walked me through the car’s features and operation as I acquainted myself with the dashboard’s etched Steuben crystal instrument faces, which rotate in their bezels—a colossal engineering challenge, especially the clock that re-centers to the 12 o’clock position on start-up. The moment of truth had me poking the starter button, which quickly brings the beast to life. Sounds like a very healthy V-8, I thought, and smoother than anything this side of an electric motor. And, almost like an electric motor, the torque comes on early in the rev range. To the team’s credit, the voice of the mighty V-16 engine was not muffled into oblivion like so many big powerplants that merely whisper.

Unleashing that torque—all 1,000 ft lbs of it—along with every one of the 1,000 horses, was not in the cards, as the engine was speed-limited in deference to the hand-cut tires (on 24-inch wheels), which were not speed-rated and were fragile compared to production rubber. But the Sixteen’s character was clearly evident: a freight-train motor in a very capable and responsive chassis. Steering was quick, and the car felt smaller and more agile than its 140-inch wheelbase would suggest. Because of its all-aluminum structure, weight is kept to a svelte 5,000 pounds—a stellar achievement given the automobile’s overall dimensions.

Doubtless, buyers in the market for the ultimate luxury statement have a handful of European offerings from which to choose, and the Sixteen would present an enticing domestic alternative. I put the obvious question to Jeffrey Kuhlman, Cadillac director of communications: Does GM have any intention of bringing the car, or a V-16 equivalent, to market? “It’s not currently in the portfolio plan, but this car, or a car like it, expresses our direction.” When I pressed with a question about the viability of the V-16 powerplant, Kuhlman continued, “We’ve explored a V-12 and V-16 with concept cars, and we are actively discussing whether one of the two power trains will play a role in Cadillac’s future.” I vote for the V-16.

The Sixteen’s 13.6-liter (830-cu-in) V-16 is a 32-valve, all-aluminum engine that is light, powerful, and relatively simple, while incorporating such current production technologies as displacement on demand, which shuts down half of the cylinders during most driving conditions. “This engine was about pushing the limits of pushrod technology,” noted Bolognino, “and the flexibility, low cost, and power output of pushrod engines. And it was Tom Stephens’ [GM Group VP of GM Powertrain] goal to keep it simple, cheap, and powerful. No overhead valves, no turbos, no superchargers.”

When asked about the short, one-year development cycle of the whole project, specifically the engine, Bolognino described conversations with Stephens. “We were talking about how we might do just eight running cylinders, or weld two eights together, and Tom says in no uncertain terms, ‘This is not a fake job. Sixteen firing cylinders. And, oh, by the way, 1,000 horsepower, 1,000 foot pounds.’ So there were some magic numbers. Five, ten years ago, there wouldn’t have been enough pattern makers in the world to make that engine in a year. But with new rapid prototyping and casting techniques, where the machinery essentially grows the sand cores, we had our first cast in three weeks.” We live in interesting times.