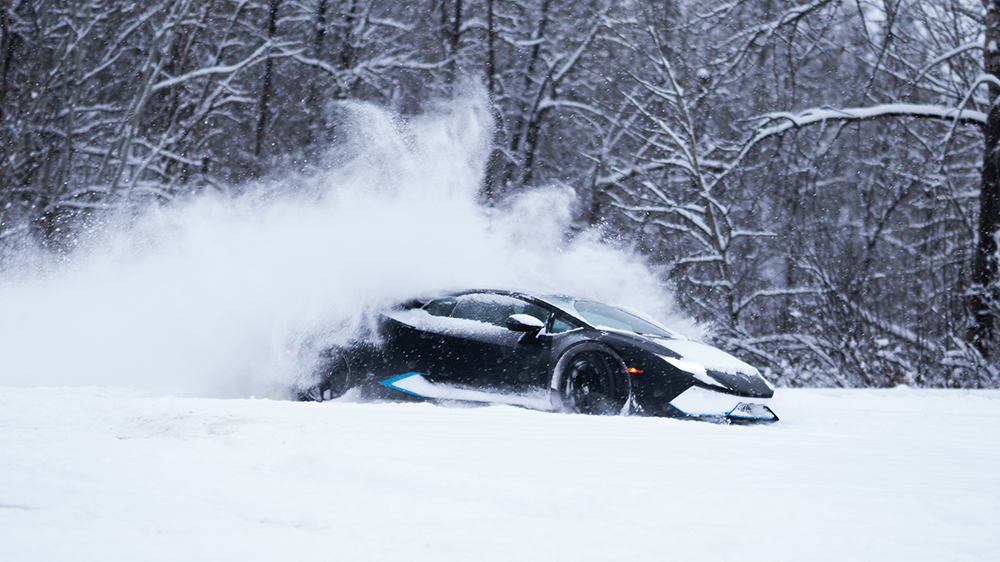 When we first reported on Oren Zamir’s valiant act of daily driving his Lamborghini Huracan, throughout the snowy winters in his home city Edmonton, Canada, a lot of you loved the story. Zamir himself was one of the readers who reached out to say how tickled he was at the piece. So we asked him a few more questions and discovered that he’s about to take his base Huracan, with a naturally aspirated V-10 that’s good for 610-horsepower, and ratchet it up to 810 ponies, via a supercharger.

“I’m getting ready to do the biggest modification yet,” Zamir told Robb Report. “I’m working with VF Engineering in California, to put a supercharger kit on that’ll bring my Huracan’s performance to hypercar levels. It’ll run a 2.3 second zero-to-60 when it’s installed.” For reference, a Ferrari LaFerrari does the same sprint in 2.4 seconds, a Bugatti Veyron Super Sport takes 2.5, and a Porsche 918 also requires 2.5. What’s the cost of making owners of those pricey toys cry when your Huracan dusts them? “It’s not cheap,” Zamir laughs. “The kit itself is about $30,000 and with the installation, I’m looking at closer to $40,000.” But can you really put a price on that adrenaline rush that will surely accompany?

Zamir actually wanted it to go even faster, and eyed twin-turbo setups for the Huracan, but after talking to a fellow Huracan owner in Texas who similarly opted for the supercharger and has since driven 20,000 blissful, issue-free miles, Zamir settled on that path.

“The twin-turbos would require a more unique fuel, that’s harder to get here in Canada, and that system isn’t good for cold weather. There’s something about the ignition when you’re in minus-20 temperatures where the system becomes less reliable and sometimes won’t even start. Turbos offer more power, of course, and there was an 800-hp, a 1,000-hp, and even a 2,000-hp option, but I don’t want to get in and worry about the engine not starting.”

And in case you’re wondering how much driving Zamir’s actually doing in the winter months, rest assured, our Canadian hero is constantly on the move. “I’ve put 4,500 miles on it since I bought it last year, and next week, I’m driving to Vancouver, which will be about 1,500 miles,” he shares, adding he’s not had many issues during those miles. “I have Pirelli Winter Sottozero tires on it, and they grip the road better than my Range Rover with winter tires.”

Believe it or not, Zamir uses the Huracan as a work vehicle, to check on his direct sales teams across Canada, and since he worked absurdly hard to be able to pay all-cash for his AWD Lambo, he’s also using his exotic wheels as a carrot for the salesmen under his purview. “It brings some inspiration, positivity, and happy faces. And it’s great motivation, because it’s proof that if you work hard, you can get what you want. I tell the guys if they get a certain amount of sales today, I’ll give them a ride.”

While doing donuts in the snow, he did slide into a snowbank and cracked the front bumper a bit, but he’s not going to fix it until spring, when he’ll swap out the front for a carbon fiber bumper. “Besides, I’m never going to sell it, so I don’t care. People say ‘never say never,’ but my goal is to keep all my cars. My dream garage is one full of supercars where my friends and family can come over and I’ll be the ultimate host and let them pick whatever they want to drive.” Uh, please invite us to your next family gathering, Oren.

Currently, he’s got a BMW i8, but up next on his hit list is a Tesla Roadster. “I’ll let it get out and wait a year or two for the price to drop and find a decent deal. I also want a McLaren 720S. The only thing you won’t see in my garage is a Ferrari. I admire how [Ferruccio] Lamborghini tried to work with [Enzo] Ferrari, but shame on [Enzo] for telling [Ferruccio] to go back to his tractors. I never want a Ferrari because of that story. Besides, in my opinion, the Lambo is a better performing and better looking car. It’s more aggressive and I love that.”