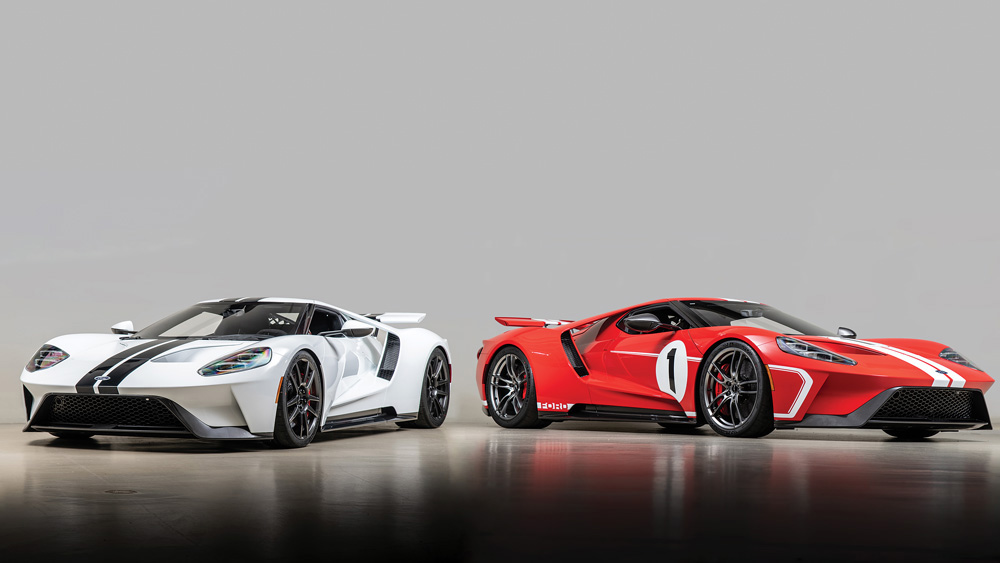 Take a limited-edition automobile, then add illustrious provenance, and you have catnip for any car collector. So, imagine the delirium caused by the news that Canepa, in Scotts Valley, Calif., is facilitating the sale of two Ford GTs—in pristine condition—that belong to motorsport luminaries Joey Hand and Scott Pruett, respectively. As each vehicle could easily be the centerpiece in any stable of exotics, the race for new ownership is on.

“The GT is Ford’s halo car. The design is like nobody else’s, and in a fantastic way. It’s revolutionary and really pretty timeless,” says Bruce Canepa, automotive Renaissance man and founder of the eponymous specialty dealership and restoration house. “The car came out in 2016 as a prototype, and here we are in 2020 and you walk around one today and it still looks like the coolest design. It’s a driver’s car, it’s not a copycat—it’s completely different.”

This 2017 Ford GT, owned by Joey Hand and now for sale, has been driven a total of 15 miles.  Photo: Courtesy of Canepa.

The GT’s origin traces back to Ford’s dominance at the 24 Hours of Le Mans in 1966, when the U.S. automaker swept the top three places with its innovative GT40 and then took the checkered flag there again for the next three years. Exactly five decades later, a Ford GT—developed in homage to its game-changing predecessor—bested all other contenders to finish first in its class at Le Mans, this time under the banner of Chip Ganassi Racing.

Joey Hand’s Ford GT carries the same chassis No., 68, as the designation of his winning car at Le Mans in 2016.  Photo: Courtesy of Canepa.

“That’s where Joey [Hand] comes in,” notes Canepa. “Chip hired Joey to drive that car as part of the team. Joey passed the Ferrari after they were penalized. He ran down that Ferrari and passed it, and then went on to win.”

In recognition of the feat, Hand was one of the early recipients of a production version and took possession of chassis No. H068, the number 68 being his Le Mans–winning car’s designation. With specifications from Hand himself, the 2017 Ford GT on offer presents a Frozen White exterior accented by black stripes and carries only 15 miles on the clock.

The immaculate interior of the 2017 Ford GT being offered through Canepa.  Photo: Courtesy of Canepa.

Canepa’s second example from Ford’s exclusive allotment was initially sent to one of the most successful racers in history and a member of four hall of fames, Scott Pruett. The fact that Pruett received a GT is only fitting in that the model owes much of its existence to him.

“My relationship with Ford goes back to late 1985, and when this project became available, I was at ground zero,” says Pruett. “Edsel Ford shared [the company’s] vision with me and I helped them pick the team, and then helped guide and develop everything.”

The result is a 647 hp supercar with a carbon-fiber chassis and a specially designed 3.5-liter twin-turbo V-6 mated to a seven-speed dual-clutch transmission—a track star that happens to be street legal. “The car is unique from the standpoint that it was designed and developed as a race car and then turned into a street car, which is very unusual,” Pruett adds.

The vehicle has only 12 miles on the odometer.  Photo: Courtesy of Canepa.

Pruett’s 2018 Ford GT Heritage Edition is very personal to him due to its livery and trim. “The No. 1 and the red, in my view, is absolutely the best heritage across the board,” states Pruett. “Even more so for me because A.J. Foyt is a friend, Dan Gurney was a friend and hero of mine, and those are two guys who drove that [livery] to victory at Le Mans,” he continues, referencing the 1967 contest. “On top of that, getting VIN No. 50, celebrating 50 years since Ford had won at Le Mans and then 50 years of my racing career, that meant a lot to me.”

The livery on Pruett’s car matches that of the winning Ford GT40 at the 24 Hours of Le Mans in 1967.  Photo: Courtesy of Canepa.

Most meaningful, however, are the only 12 miles Pruett has put on the odometer, all on a drive with a very special passenger. “My dad is in the latter stages of Parkinson’s and he has always been by my side throughout and has always been a car guy,” shares Pruett. “We went for a quick ride and it made for a really wonderful memory.”

For Bruce Canepa, the bottom line is legacy. “There’s going to be, I don’t know how many Ford GT’s, it’s something over 1,300 now,” he observes. “But then there are Ford GT’s that have a story. A great story.”

Those seriously interested in being a part of either car’s next chapter can contact Canepa directly for more details and pricing.