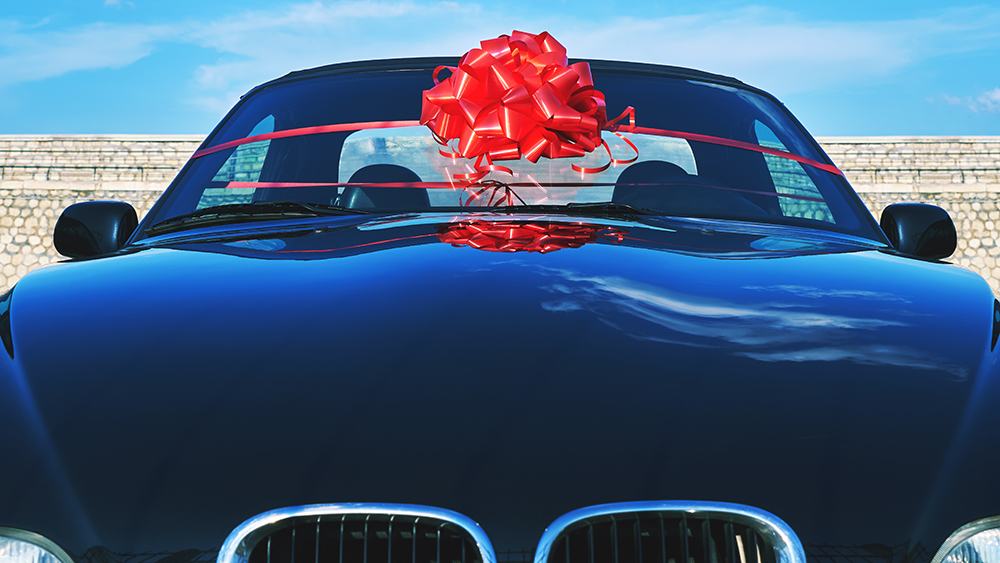 A car is the very last thing you should give as a gift to a car enthusiast. We are an incredibly fussy bunch. No matter how desirable the Ferrari or Bentley that appears on our drive adorned with an outsize bow, some tiny detail won’t be right. The wheels will be of the wrong design, or the fancy tan upholstery won’t be the sober, driverly black we wanted, or the absolutely critical sports suspension package will be lacking. For auto obsessives, the delicious agony of working through the options list and committing to the perfect specification is as pleasurable as actually driving the end result. Gift us a car and you deny us that. And you’ll never, ever guess our ideal specs unaided.

Normal people, however, would be delighted to get a car as a gift. For spouses or children who aren’t car fanatics, it’s a home run of a present: a major life event. And despite the cost, giving cars is big business. Last holiday season The New York Times reported that 10 percent or more of some luxury brands’ December sales were ordered specifically as gifts. December isn’t typically huge for nonpremium auto sales, but for the past three years it has been the best month for Mercedes, Lexus, BMW and Lincoln. These choice marques have seen a holiday sales bump, suggesting that plenty of us car enthusiasts are gifting cars to ourselves. Such self-indulgence presumably helps ease the national giant-bow shortage at this time of year: One Jaguar dealer reports asking for them to be returned.

Supercars are gifted too. The giving of Ferraris and Lamborghinis is most visible among entertainment and social-media stars, who do it, one suspects, for the clicks. We won’t give them further publicity by repeating their extravagances here. The car-gifting culture in the Gulf states and China is more interesting and subtler. Such largesse seldom becomes public. The gifter rarely reveals it, to avoid the appearance of overindulgence, and the lucky recipient can’t really sell the vehicle, especially if it’s highly customized. On a recent visit to Rolls-Royce’s Bespoke workshop at its factory in Sussex, England, the designers told me that a high proportion of their most expensive, individualized creations have an unbreakable delivery deadline of a birthday or a religious festival. The car must be not only finished by then but also flown to its destination, passed by customs and registered for the road—not always easy with demanding givers who obsess over the details of their presents.

Tod’s famous Gommino driving shoe is a casual take on the loafer.  Courtesy of Tod's

But what do you get the auto aficionado in your life if your budget is more modest? I’d be overjoyed with a pair of Tod’s Gommino driving shoes, a pair of Serengeti Drivers sunglasses or a new pair of driving gloves from New York–based Autodromo—absolutely the most comfortable I’ve tried, but they’re to be worn only in a vintage car whose steering wheel was designed to be used with gloves. If the budget stretches a little further, give us an experience rather than a thing. Say, racetrack instruction with Skip Barber or at one of Porsche’s new experience centers in Atlanta or LA, an ice-driving trip to the Swedish Arctic or a visit to one of the great motorsport events, such as Le Mans, the Monaco Grand Prix or the Goodwood Festival of Speed. (See our Ultimate Gift Guide for more inspiration.)

And if any of these options hit the mark, I hope your generosity will extend to the humble columnist who provided them. I’m actually not at all fussy about what color my gift Ferrari comes in, and I really don’t need the bow.