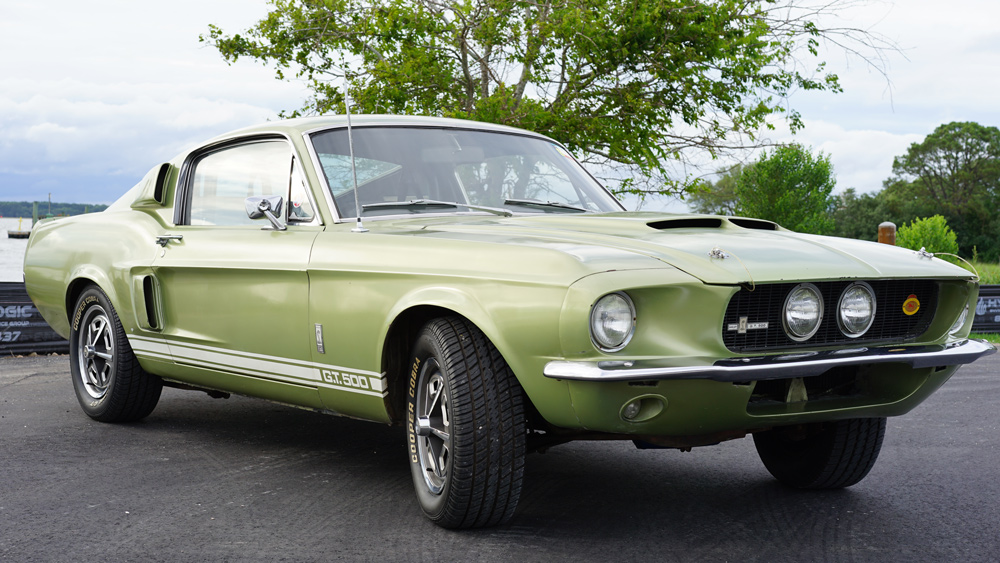 No car person will disagree that Shelby and Mustang go together like Courvoisier and Coke, concocting a sweet cocktail with some serious kick. Of course, the new Ford Shelby Mustangs are hugely competent sports cars, but so was their granddaddy, the very first GT350. That model, based on the original Mustang 2+2 fastback from 1965, established itself as the Sports Car Club of America (SCCA) B-Production champion from 1965 to 1967, although Shelby taught the street version a few manners for 1966 in deference to customers who wanted a less feral version of the original.

Ford, however, had bigger ideas for its Mustang, by then a brand-defining cash cow. For 1967, the automaker introduced a whole different Mustang that that was larger, heavier and infinitely more luxurious than its predecessor. Exploiting Carroll Shelby’s competition success, Ford enlisted him to build a 1967 Shelby Mustang fitted with a choice of two engines. The GT350 was given Ford’s venerable 289 cu in V-8, which may be the most exciting American small-block V-8 ever made (with no disrespect to those who worship at the altar of Chevrolet’s 327). The GT500, like the example below that’s currently on offer through online auction house DreamCars.com, was configured with a Ford Cobra 428 cu in V-8, with dual Holley four-barrel carbs topping an aluminum manifold.

Probably the most interesting—and certainly best looking—post-1965 Shelby is the 1967 GT500. It was the last car built under the aegis of ‘Ol Shel himself, who admitted that, by 1968, the program had devolved into a marketing exercise. By mid-1967, production was moved from Shelby’s Los Angeles facility to A.O. Smith in Ionia, Mich., and was fully under Ford’s management. But the GT500 was one heck of a swan song, a full-scale Hot Wheels–like model that makes bug-eyed Eleanor look tame.

The secret was in the styling by Chuck McHose, an unsung designer that Ford sent to Shelby in Los Angeles for a short stint. His mission was to transform the attractive Mustang into a show car. McHose left his indelible aesthetic signature in fiberglass, lengthening the front end and hood, while adding a wicked spoiler to the revised rear end. Big side scoops add even more sportiness. He even designed the now-famous Shelby snake that adorns the car’s front fenders.

Some of the dashboard’s classic gauges, including the odometer that reads 50,760 miles.  Photo: Courtesy of DreamCars.com.

Admittedly, the GT500 was big and heavy compared to the minimalist first-year cars. Lots of power-assist, available air conditioning and a luxurious interior ladled with fake-wood vinyl appliqué made it anything but a sports car. The descriptor “GT” (for Grand Tourer) was certainly more appropriate. But a GT500 is a thrilling throwback to the era of loud, gas-gargling American muscle cars that will never be repeated. And in the scheme of things, they are rare. For the 1967 model year, only 2,048 examples of the GT500 were built, making it a highly collectible piece of automotive art.

The model was styled by Ford designer Chuck McHose, whose mission it was to transform the Mustang into a show car.  Photo: Courtesy of DreamCars.com.

Compared to other classic vehicles, restoring an American car from this period is not an impossible or bank-breaking undertaking, and with Shelby values generally robust, a ’67 GT500 is always a safe bet. It’s important to remember that many big V-8s of the period were driven hard and put away dead; in other words, a fair share have replacement engines and transmissions, so it’s worth finding an example that retains its original power train. And verification is only an email away, after joining the Shelby American Automobile Club (SAAC).

There are some owners, however, who like to drive an unrestored car, preferring original paint, a well-loved interior and what we’d call “patina” in preference to perfect paint and highly polished metalwork. The Shelby GT500 being presented by DreamCars.com is, according to the seller, one of those survivors. It gets extra points for having its original engine and four-speed manual transmission, one of 1,376 so equipped, but also has a few anomalous details, like incorrect wheels. With a claimed 50,760 original miles and sporting Lime Gold metallic paint, this classic pony car is waiting for a new stable to call home.