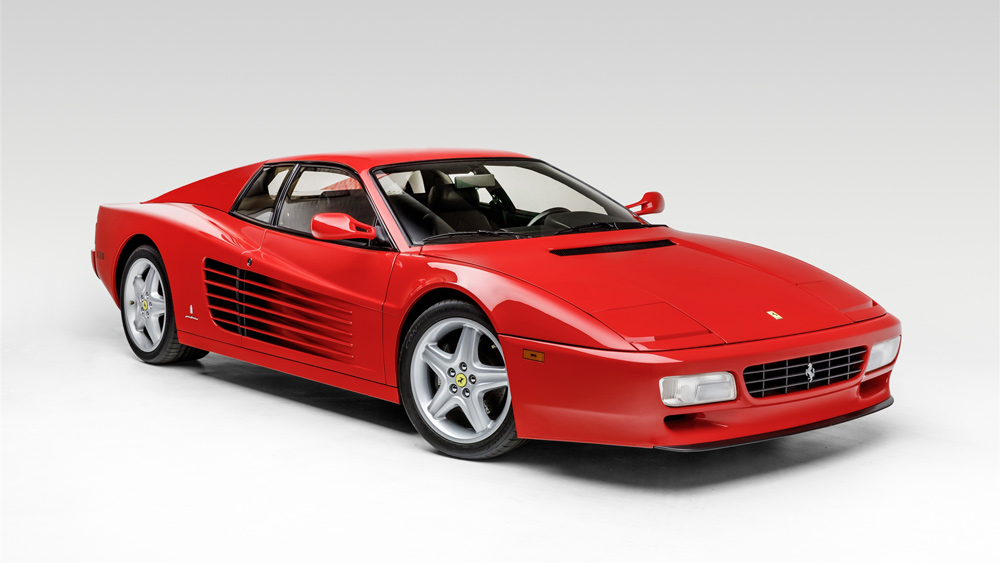 On April 10, a total of 132 high-performance automobiles—mostly from the 21st century—will be presented through Bonhams at its Supercars on Sunset auction, with many of the lots likely to become even more collectible in the years ahead. It could be assumed that the 1993 Ferrari 512 TR crossing the block, estimated to fetch as much as $275,000, might easily be overshadowed by the seven-figure supercars in the sale. But not so fast (pun intended): Every iteration of the Ferrari Testarossa just keeps gaining in historical significance—while looking better and better—as the decades pile on.

According to Jakob Greisen, vice president and head of US Motoring for Bonhams, “The 512 TR was the end of the flat-twelve Ferrari era, which started with the 365 Boxer about 20 years earlier.” He adds that since the model represents “the more refined design of the now legendary Testarossa,” it has only become more coveted of late. As for the one being showcased at the sale, Greisen notes that it “must be one of the best-preserved examples remaining. The design has aged well—although they surely will never be subtle or understated—and the 512 TR is still very fast even by today’s standards.”

The 1993 Ferrari 512 TR being offered through Bonhams at its Supercars on Sunset auction.  Photo by Ted Seven, courtesy of Bonhams.

Ferrari’s Testarossa, the immediate successor to the Berlinetta Boxer (BB 512), was introduced in 1984 at the Paris Auto Show. Pininfarina’s design was an aesthetic triumph in a year that brought us pop culture kitsch like Patrick Nagel posters and the first season of the television show Miami Vice, whose detective duo committed sartorial offenses as egregious as any crimes they solved. The TR’s air-gulping vents are the signature of Pininfarina’s slab-sided design, and like a double-breasted Armani blazer, they exuberantly expressed the era, though both became anachronisms once side strakes on cars and padded shoulders on people went out of fashion.

The 512 TR’s air-gulping vents are the signature of Pininfarina’s slab-sided design.  Photo by Ted Seven, courtesy of Bonhams.

The Testarossa (Type F110), not to be confused with Ferrari’s original 250 Testa Rossa of 1957, was made through 1991. With nearly 7,200 units built, it was an unqualified success for Ferrari’s top model. It was followed by the more refined 512 TR, of which fewer than 2,300 were constructed. Finally, the 512 M, distinguished by open headlamps, saw 501 examples made from 1995 to 1996. The last of the marque’s rear-engined flat-twelve offerings, the series was replaced in 1996 by the 550 Maranello, which was powered by the more conventional V-12 engine configuration.

Fewer than 2,300 examples of the Ferrari 512 TR were constructed.  Photo by Ted Seven, courtesy of Bonhams.

Despite being much larger than the Berlinetta Boxer it replaced, the Testarossa was lighter. With a steel roof and doors, and other body panels in aluminum, it featured an aerodynamic design that resulted in a low drag coefficient with high downforce, while the absence of spoilers gave it a monolithic, sculptural shape. The 512 TR, distinguished from the Testarossa primarily by revised front-end bodywork, was an imposing slab of a car. At nearly 6.5-feet, it was six inches wider than the BB 512. This was in order to accommodate 18-inch wheels and wider tires, provide more efficient engine cooling and increase occupant comfort. And while it’s undeniably a sports car, the term “two-place GT” might be more accurate, as the Testarossa and its relatives were never pressed into motorsport competition—which is not the same as saying the 512 TR didn’t perform.

The example presented is in original condition and shows fewer than 10,750 miles on the odometer.  Photo by Ted Seven, courtesy of Bonhams.

The power plant used in its rear-mid-engine setup is a 4.9-liter, DOHC flat-twelve that makes 421 hp at 6,750 rpm, with 360 ft lbs of torque at 5,500 rpm. The 196 mph top end is accompanied by a zero-to-60 mph time of about 4.3 seconds. Like Elvis, carburetors had long since left the building, and Bosch Motronic fuel injection delivered fuel to the thirsty engine, whose twin red intake plenums paid homage to the model’s TR suffix—short for Testa Rossa (red head).

Inside the car’s purposeful cockpit is a manual stick shift, topped with a traditional black cue ball on a chrome shaft, diligently clunked through a heavy slotted five-speed gate with Reverse located at the top left. Aft of the shift gate, on the center console, resides a quaint reminder of the times: a quintet of storage holders that ejected one’s favorite cassette tapes.

The 512 TR distinguished itself from earlier Testarossa iterations primarily by revised front-end bodywork.  Photo by Ted Seven, courtesy of Bonhams.

This example, in original condition and showing fewer than 10,750 miles, was completed in May 1992 and wears its original Rosso Corsa paint. Its history can be traced to British Columbia, Canada, from 1994, with one owner there until 2019, when it came Stateside. Importantly, it benefits from an engine-out major service—including timing belt replacement—performed by an authorized Ferrari dealer in 2020.

The car reveals its age with a five-slot storage compartment for cassette tapes in the center console.  Photo by Ted Seven, courtesy of Bonhams.

Until recently, Testarossas, and to a lesser extent 512 TRs, were 12-cylinder Ferrari bargains, with only the 456 and a few of that model’s four-seat predecessors costing less. Those days are gone, however, and yesterday’s Ferrari fashion has made a welcome comeback. Meanwhile, there are those of us who feel strongly that any Miami Vice sequel remains an eternally bad idea.