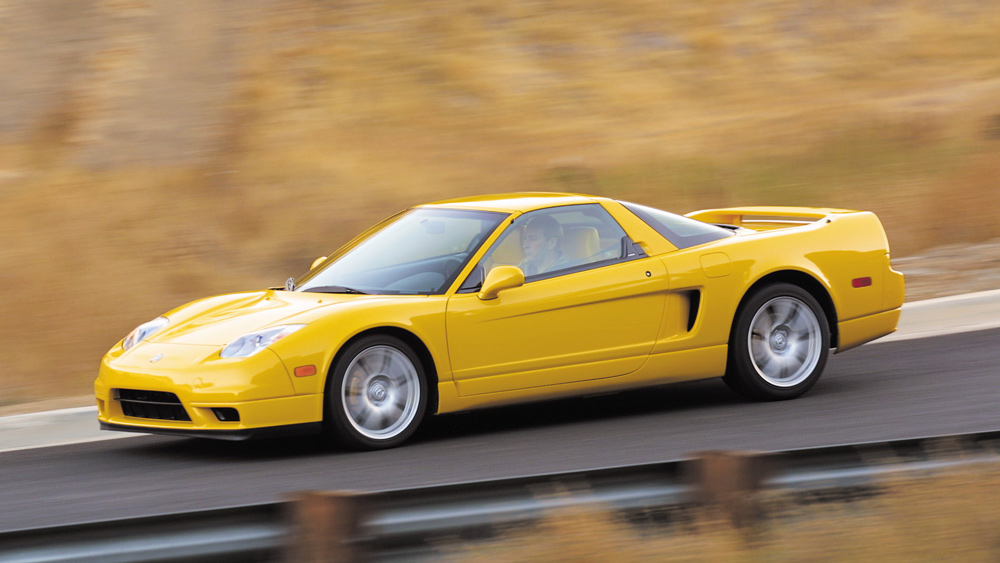 The Acura NSX was one of the most exclusive sports cars available in 2005, which was the last year for Honda’s first ultra-exotic until the NSX nameplate was revived with the 2016 model. It’s certainly one of the most interesting sport cars of its era. Introduced in 1989, and put into production by 1991, Honda’s NSX was marketed in North America as an Acura, and was a technological tour de force—years ahead of its time—with the first all-aluminum unit-body, chassis subframes and suspension of any production car.

Nearly 15 years after its introduction, and more than 18,000 examples later, the NSX still retains the qualities that made it such a gratifying car to drive back in the day when Porsches still looked like Porsches and the most exotic thing from Japan was a Toyota Supra. Of course, today’s best sports cars remind us how far things have come in the intervening years. But the NSX still has its chops, and as for looks, while some observers might call it dated, we disagree. The appropriate description is “timeless classic.” This vehicle is still a head-turner, even in jaded auto jungles like Los Angeles. And colors like Rio Yellow Pearl gain added attention and would be at home sprayed on the latest-and-greatest European supercars. 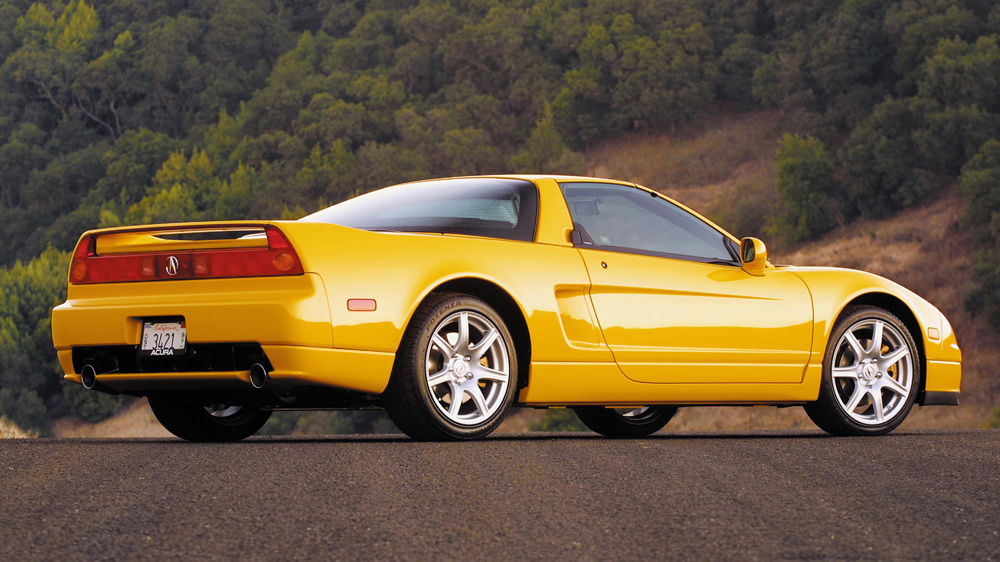 Assembled by a team of special technicians at a dedicated facility in Tochigi, Japan, the NSX is a quality piece, and remains a benchmark in the fit and finish department. Few hand-built cars—then or now—emulate the precision of the NSX’s manufacture, and it’s possible to imagine an example with 200,000 miles on the odometer being as tight and together as one with 5,000 miles. This observation underscores the NSX’s raison d’être: It offered its owner the possibility of enjoying a perfectly delightful, neurosis-free driving experience on a daily basis.

Settling into the cockpit also reminds us of simpler times, when drivers engaged with their car without being assaulted by digital arcade games doubling as dashboards. Free of electronic gizmos and multifunction screens, the NSX interior is, on the one hand, dated, but also refreshing in its absence of stuff that neither abets comfort nor improves the driving experience. An Acura/Bose sound system with remote CD changer and a chilling A/C provide all the necessary amenities. The driving position, sport seats and view from behind the grand windscreen are as good as it gets. Rearward vision is merely adequate, but not fear-inspiring as in some cars that require back-up cameras or open doors to navigate a parallel parking space. 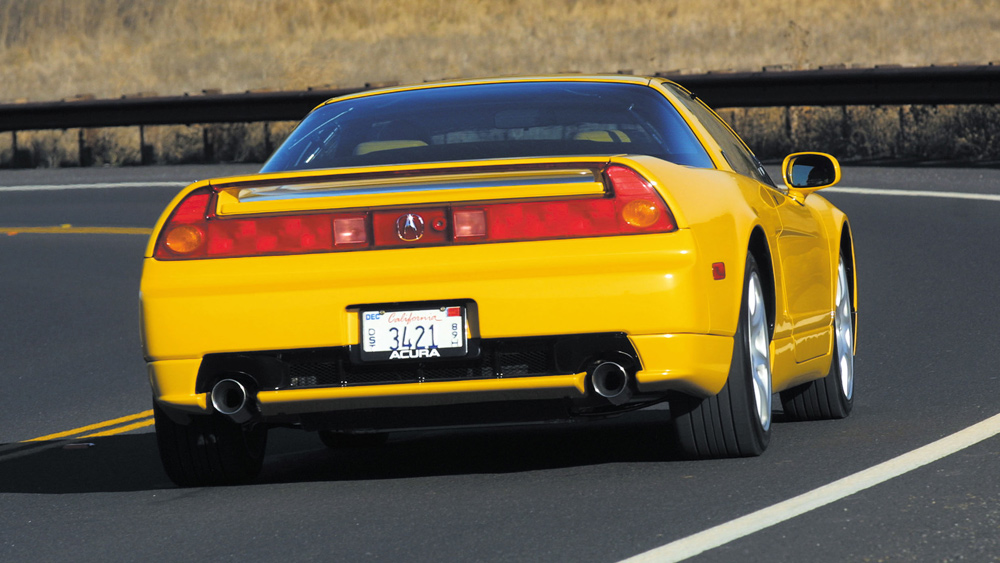 The original Acura NSX was the first production car with a unit-body, chassis subframe and suspension that was completely aluminum.  Photo: Courtesy of Honda Motor Co., Ltd.

The driving experience is eminently rewarding, and the fact that the NSX weighs only 3,153 pounds makes it a lightweight among today’s performance cars. Its cab-forward design is right out of the modern supercar-designer’s handbook, and the responsive steering—light and precise—offers excellent feedback. Some understeer has been engineered into the independent double-wishbone suspension, and the NSX is not prone to tail-out antics as its mid-engine layout and long posterior might suggest. 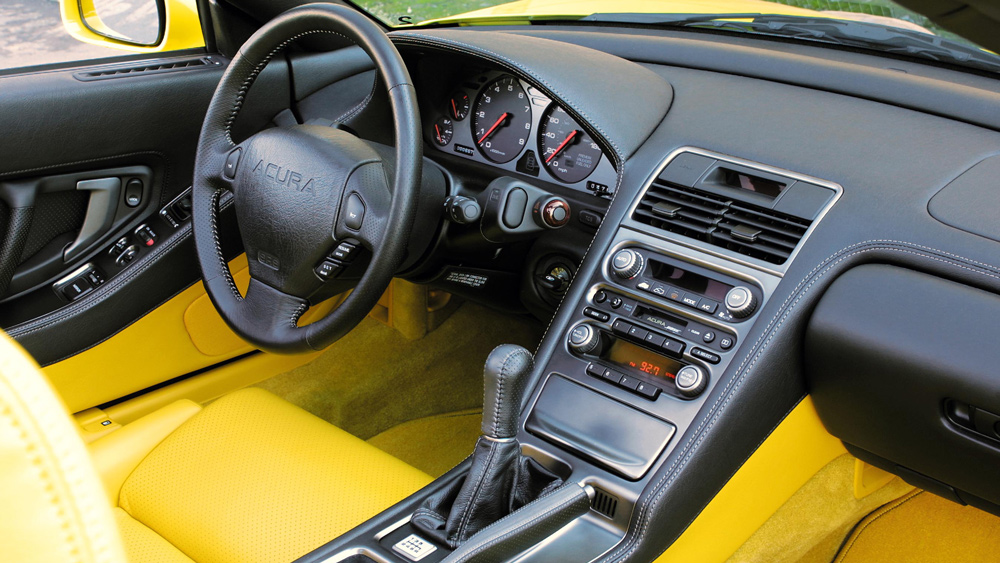 Unfortunately, a fixed-roof variant was not available after the 2001 model year, and the lack of a solid roof is betrayed by mild cowl shake and vibration transmitted through the steering wheel on bumpy surfaces. But despite the car’s architecture and the fact that the NSX has a strictly two-person capacity, the model features a rear trunk compartment that is fairly commodious and practical for weekend jaunts—golf clubs or skis notwithstanding.

Two versions of an all-aluminum DOHC V-6 engine powered the 2005 NSX: The six-speed manual transmission used a 3.2-liter, 290 hp power plant, and the automatic came with a 3.0-liter, 252 hp mill. Which brings us to the fact that the NSX was, even when new, underpowered. And with only 224 ft lbs of torque on tap in manual mode, most NSX drivers will be stirring the silky manual gearbox and enjoying the 8,000 rpm redline much of the time. 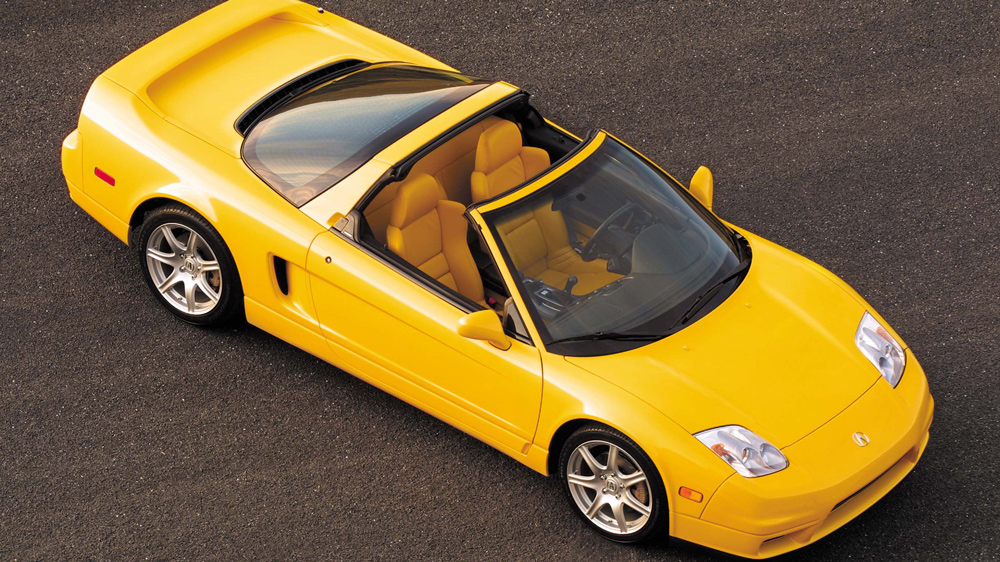 One reward for such activity is the absolutely scintillating exhaust note—not quite in Ferrari territory but definitely on a higher aural plane. Overall, the lack of absolute power should not be a deal-breaker for intelligent drivers who judge a car on merits beyond mere horsepower and cubic inches. While not inexpensive (it sold for $89,000 new), an NSX from model years 2002 to 2005—and identified with exposed, instead of retractable, headlamps—is worth every penny of its six-figure value today, especially given its limited build numbers, advanced materials, top-quality construction and bulletproof reliability.

Even with exemplary engineering and build quality, the NSX of the early 2000s presents a few potential trouble spots. Clutches only have a roughly 50,000-mile lifespan. In addition, replacement of the water pump, hoses and a complicated timing belt change are required by 80,000 miles. Early cars can be plagued with other gremlins, and maintenance history, as with any exotic of the era, is essential in establishing value. Plan to spend well upward of $120,000 for an excellent 2005 NSX. 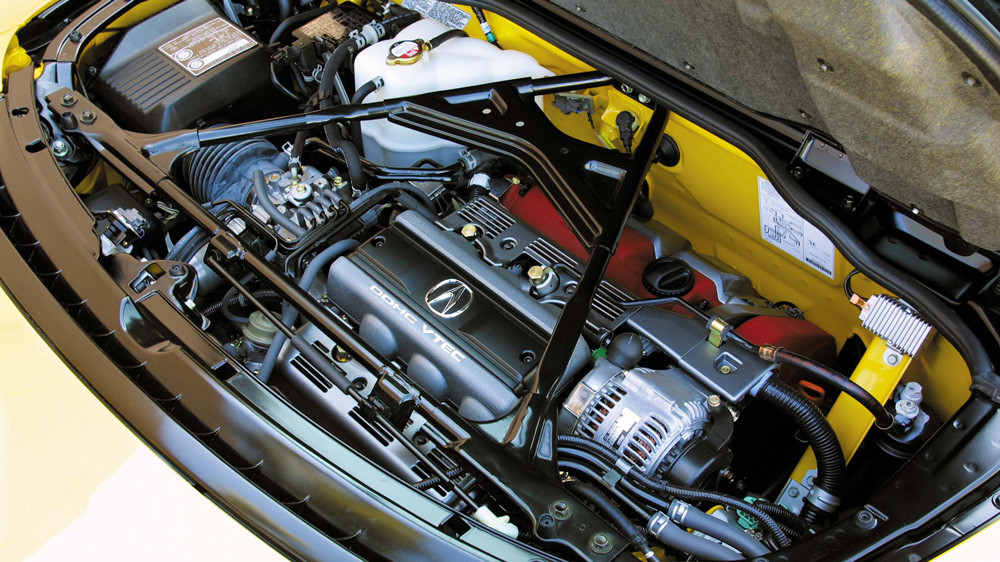 With the 2006 model year came more stringent emissions and equipment regulations from our “friends” at the EPA, as well as from European and Asian agencies. The extensive retooling necessary for the NSX to meet those requirements brought the lineage to an end until it was resurrected in 2016 with an entirely new—and not very enthusiastically received—hybrid-electric model with a twin-turbo V-6 and three electric motors. Looking back, drivers who seek a pure and refined jewel of a sports car will discover that the last round of the original NSX is the one to own.