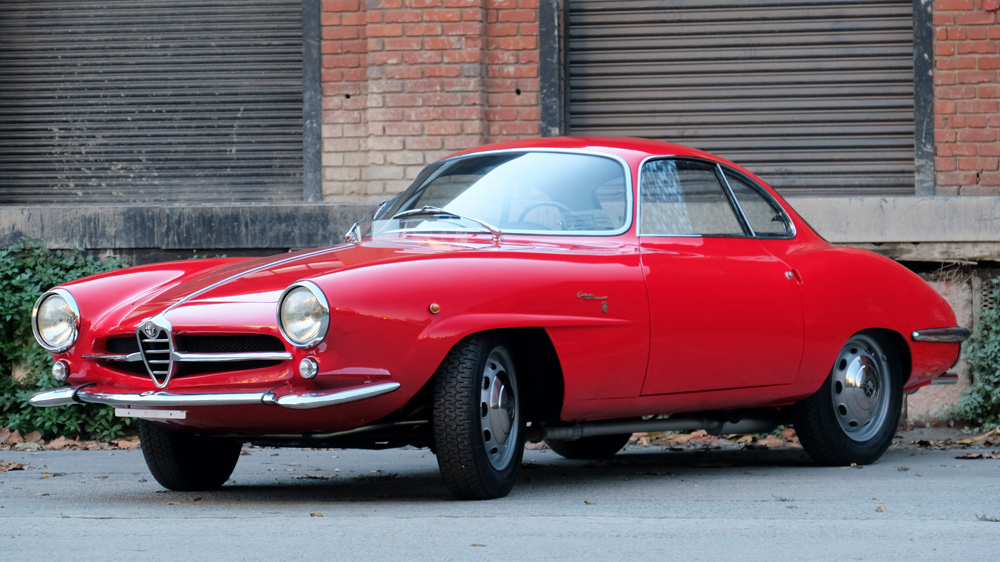 Just about any Alfa Romeo made prior to the mid-1970s is an expression of the Italian sports car in its purest form, proof that it doesn’t take a V-12 engine to get one’s blood racing. A tiny Alfa, with its twin-cam inline-four engine—as precise as a sewing machine—is as delightful a car as can be imagined. A sunny day and a twisty road are an invitation to dance with a classic Alfa—a partner as lithe and accomplished as it is elegant and rare.

Alfa Romeo has been at the forefront of design from the marque’s beginning, which happened to be 1910, a long time for any auto manufacturer to have been in business. Prior to the 1950s, Alfa Romeo was a luxury carmaker whose chassis were dressed by the finest Italian coachbuilders. There’s a formidable number of prewar Alfa models (though not many examples left of each), and many were beautiful beyond words.

After shaking off the dust and wreckage of World War II, the Italian car industry was reborn, a time when Alfa Romeo transitioned from bespoke, coach-built luxury cars to series-production sports cars and sedans powered mostly by economical four-cylinder engines. Pininfarina and Bertone were primary suppliers of bodies for spiders and coupes, respectively. The marque’s first series-production cars were introduced in 1954, with the Giulietta (Tipo 750 and, later, the Tipo 101) in coupe, spider and sedan form, as well as numerous specials. Throughout the company’s history, Alfa Romeo has shown the world that great design can be expressed as eloquently in a modest city car as it can in a concept-car masterpiece.

The model debuted at the Turin Motor Show in 1957.  Photo: Courtesy of Fantasy Junction.

There is no shortage of seductive Alfa Romeos. The company’s early affiliation with Italian carrozzerie comprises a who’s who of coachbuilders and individual designers whose indelible marks resonate as loudly today as they did when their creations were new. Of all the Alfa Romeo production models built in any quantity to measure, the Giulietta Sprint Speciale (SS) is perhaps the most remarkable.

Made from 1959 to 1966, it was designed by the mercurial Franco Scaglione for coachbuilder Bertone, and offers eccentric flair. If the SS bears more than a slight resemblance to the outrageous Alfa Romeo B.A.T 5, 7 and 9 concept cars, it’s because their designer was also Scaglione, who was employed by Bertone at the time. By 1963, he’d created designs like the Lamborghini 350 GTV, the first car (a unique prototype) to wear the badge of the bull. Its design—like the designer—was too radical for the client, and the subsequent production Lamborghini 350 GT wore a body by Carrozzeria Touring.

First shown at the Turin Motor Show in 1957, the Giulietta Sprint Speciale was finalized in 1959, with the first 101 examples featuring a “low nose” front end. That limited number feature aerodynamic body styling so advanced that their coefficient of drag was not improved upon by a production car for two decades, and they remain the most collectible of the SS variants. At the time it was introduced, the Giulietta Sprint Speciale was Alfa’s shining star, and was essentially a hand-built series-production car. It’s 1,290 cc, DOHC inline-four made about 100 hp, plenty to whisk the diminutive 1,900-pound coupe along at a brisk pace, with power delivered through a five-speed transmission.

The example available has a numbers-matching engine.  Photo: Courtesy of Fantasy Junction.

Twin Weber carburetors reside under the hood, and a look at the front brakes reveals a bit of mechanical wizardry with three-shoe drums. It’s hard to convey the scale of this exquisite Alfa; to park one aside any modern sports car is to see how ill-bred and overstuffed automobiles have become in the decades since. About 1,366 examples were made, which include the 1.6-liter Giulia SS—produced from 1963 through 1966—that replaced the Giulietta and wore an identical body as its predecessor.

With a numbers-matching engine and fresh red paint, this 1962 Giulietta Sprint Speciale is offered at $125,000 by Fantasy Junction in Emeryville, Calif. The well-regarded dealer has a classic inventory that typically features many important European sports cars. While most of Fantasy Junction’s offerings are more valuable and higher in profile than this Alfa, few are more endearing or rewarding to drive. The term “automotive sculpture” is much overused, but it’s perfectly authentic terminology to describe the Alfa Romeo Giulietta Sprint Speciale.