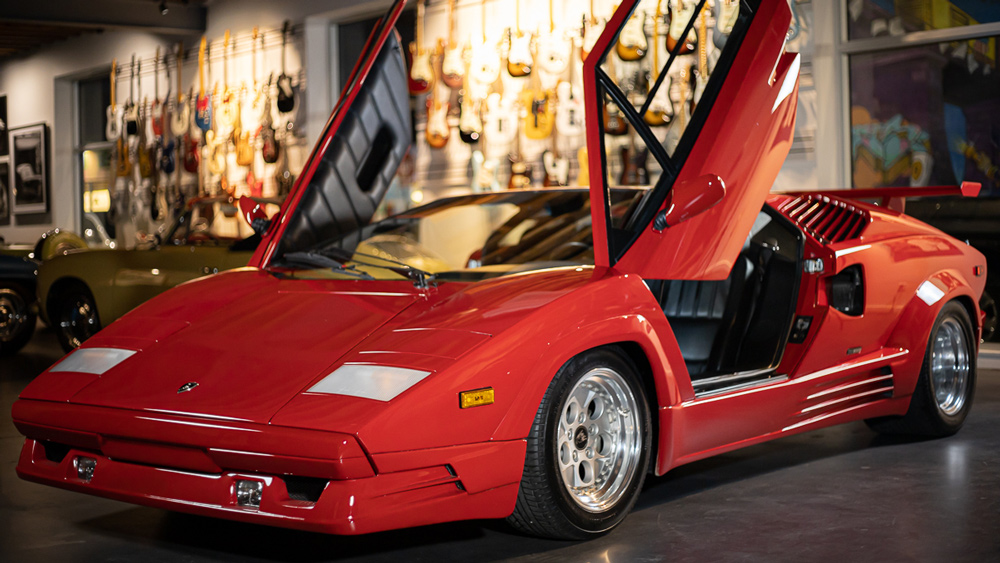 Cars and music have much in common. Both can be like mirrors, and it’s hard to imagine a better reflection of any given period than the automobiles and the popular songs that expressed the ethos of their era. Some car people, myself included, tend to use automobiles and music almost like calendar markers. I was not quite 20 years old when the first Lamborghini Countach LP400 came on the scene in 1974, the same year David Bowie’s anthem Rebel Rebel broke onto the airwaves. Fittingly, more than any car—maybe ever made—the Countach was the rebel of its age. I froze in awe when I saw a real one for the first time a year or two later.

I’m still awed every time I see one, especially an example like the 1989 Lamborghini 25th Anniversary Countach currently on offer through Walt Grace Vintage in Miami, Fla. Talk about a real automotive unicorn. But first, a little backstory on the model in general.

The Countach’s progenitor was a wild concept called the LP500 unveiled by Bertone at the Geneva Motor Show in 1971. That the design still remains so futuristic and fresh is a testament to Marcello Gandini, the young design director of Bertone who had just previously penned the brilliant Alfa Romeo Carabo and Lancia Stratos Zero concept cars. Lamborghini’s Miura SV was still on a roll, but customers clamored for the space-aged Countach and so the Lamborghini factory set about developing the car for production. The LP in its name refers to Longitudinale Posteriore, as the engine was laid out lengthwise, unlike the sidewinder stuffed into the Miura.

The LP500, which celebrated its 50th anniversary on March 11, was developed under Lamborghini’s technical director Paolo Stanzani, and it was unique. Despite their similar appearance, the yellow prototype was different under the skin than the production LP400 that followed. Using a platform frame instead of the elaborate tubular structure of the street car, it also had a one-of-a-kind 5.0-liter V-12 engine. A 3.9-liter production engine was later transplanted, and that LP500 was used as a development car by chief test driver Bob Wallace until being sacrificed for crash testing, thereby turning it from a one-and-only into a one-and-none.

But the phoenix rose from the crumpled wreckage, so to speak, and, in 1974, the first of the LP400 models came off the line. That series, unofficially called the Periscopo, had a novel mirror that allowed the driver to obtain a rear view (theoretically). The rarest of the Countach line, about 158 examples were made through 1977. The most pure and elemental Countach, these early cars can, in some instances, be three times as valuable as subsequent models.

By that time, the Countach was long in the tooth and soon took a bow with the 25th Anniversary Edition for model year 1989. Celebrating 25 years since the company’s first production car, the 350 GT of 1964, the commemorative Countach featured updated styling by Horacio Pagani, notably, the Ferrari Testarossa-like side strakes, which were au courante then, but seem rather fussy now. About 610 examples were made through 1990, when the Diablo came on the scene. With a zero-to-60 mph time of about 4.7 seconds and a top speed of 183 mph, the last iteration of the Countach was the most highly developed of them all. According to the factory, a total of 1,999 Countach examples of all variants were produced over the model’s run.

About 610 examples of the Lamborghini Countach 25th Anniversary Edition were made through 1990.  Photo: Courtesy of Walt Grace Vintage.

Any Countach is a desirable collectible; a real sculptural centerpiece of a garage. That being said, the cars are challenging to drive, not least because anyone even closely approaching six feet in height will have a devil of a time folding themselves into the cockpit. With legs splayed to either side of the steering wheel and arms straight out, and without steering assist, most people will find that the Countach is a workout to pilot. It’s not a “flickable” car like a Porsche 911, where quick input is rewarded by quick response.

Anyone even approaching six feet in height will find fitting into the cockpit a challenge.  Photo: Courtesy of Walt Grace Vintage.

Shifting is clunky in a mechanically satisfying way, and while the V-12 is one rare engine that can lug around at low rpm, the power really only comes on in the top of the power band, which means stuffing the accelerator and unleashing a cacophony of racket from the 12 cylinders that sit inches behind the driver’s ears. The car isn’t particularly large or long, but it is wide and—at a height of just 42 inches—low. And any attempt at a U-turn is to be avoided—it’s nearly impossible to reverse without a feeling of dread, and it may be the only car where drivers will wish that every piece of pavement was a one-way street.

Restoring a Countach is also a serious undertaking. With the tubular chassis, it’s a complicated car to undress and repair, so well-preserved originals or well-restored examples are the only way to fly. Which is why the 25th Anniversary Countach that Walt Grace Vintage is presenting for sale is remarkable. Its colorways are quintessential, and perfect for the wedgy form. Importantly, the seller explains that this car, finished in its factory original Rosso Siviglia paint with original black leather interior, has only 623 miles (1,003 km) on the odometer.

A stunning time capsule, this car will present its next owner with a tough decision to make: preserve it or drive it? We suggest doing both, because the sight and sound of a Countach in motion—from behind the wheel or from the side of the road—is an unforgettable experience.