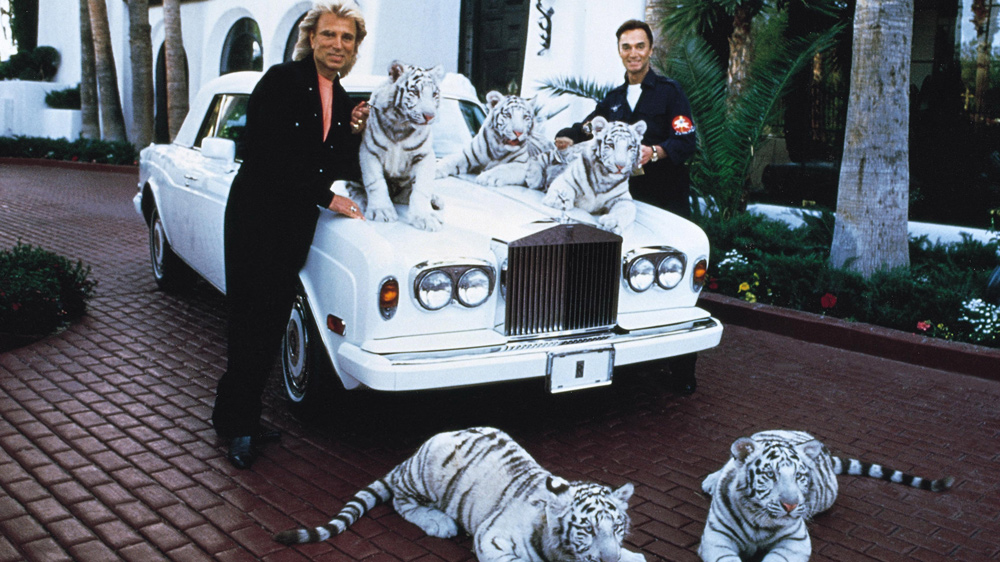 Star cars have a certain appeal, offering a contrasting glimpse of a celebrity’s private life spent behind the wheel with that of an often over-the-top public persona. Automobiles like one of Rod Stewart’s Lamborghini Miuras, whose headliner was reputedly perforated by holes from a pair of spiked heels, or Elvis’ De Tomaso Pantera that wears the bullet holes he put in it, are extreme examples. And while not possessing such poignant battle scars, the 1994 Rolls-Royce Corniche gifted that year to Roy Horn for his 50th birthday, might still have a few paw marks on its dazzling white paint.

Who was Roy Horn? Precisely one half of the famed illusionist duo—and Las Vegas headliners—Siegfried & Roy, and his convertible is offered at no reserve on behalf of the Siegfried & Roy estate. The car is one of the lots being presented at Barrett-Jackson’s upcoming live auction at the West Hall of the Las Vegas Convention Center from June 17 through 19.

The 1994 Rolls-Royce Corniche owned by Roy Horn of Siegfried and Roy.  Photo: Courtesy of Barrett-Jackson Auctions.

The year 1965 was a major one for Rolls-Royce, whose new Silver Shadow represented a radical shift from traditional body-on-frame construction to become the first unibody car to wear the Spirit of Ecstasy atop its grille. Its four-door bodywork was fabricated in the factory, signaling the end of the coachbuilt era. However, stylish two-door coupes and convertibles were offered to customers who demanded them, and those were coachbuilt by Rolls-Royce subsidiary Mulliner Park Ward.

Far and away the most expensive British car upon its launch, the coupe and convertible models were christened Corniche in 1971 as a nod to the roads hugging the French Cote d’Azur. While the coupe was discontinued in 1982, the popular and coveted convertible was made until 1996, with customers often waiting years for delivery.

The vehicle’s power could be characterized as “adequate,” in Rolls-Royce parlance of the day, which really translates to about 218 hp, churned from the torquey bowels of a 6.75-liter V-8 engine that has proven to be one of the longest-lived designs in automotive history. That reliable iron lump brought the 5,000-pound car to 60 mph from a standstill in about 10 seconds. That’s not cheetah-fast, but appropriate for the then-king of the luxury-car jungle, which didn’t have to run from anyone. Slight variations in appearance and specification distinguished Corniches over the years, with the Corniche IV being the final version, about 219 examples of which were made from 1993 to 1996.

The 6.75-liter V-8 engine produces roughly 218 hp and brings the car from zero to 60 mph in approximately 10 seconds.  Photo: Courtesy of Barrett-Jackson Auctions.

Few modern luxury collector cars have the presence—and more eloquently express their time—than a white Rolls-Royce Corniche. The creamy-white paintwork, white Everflex vinyl roof, white-and-burgundy leather interior and inlaid burlwood trim capture the era to a tee. Proof that what happens in Vegas, stays in Vegas, this car was owned by the entertainer until his passing in 2020.

Siegfried Fischbacher (left) and Roy Horn (right) pose with a white tiger atop the 1994 Rolls-Royce Corniche soon to be auctioned.  Photo: Courtesy of Barrett-Jackson Auctions.

Recently serviced, the car is accompanied by a nice selection of photographs that document its provenance and also depict some of feline co-stars of the world-famous—and inimitable—Siegfried & Roy shows. Big cats not included.