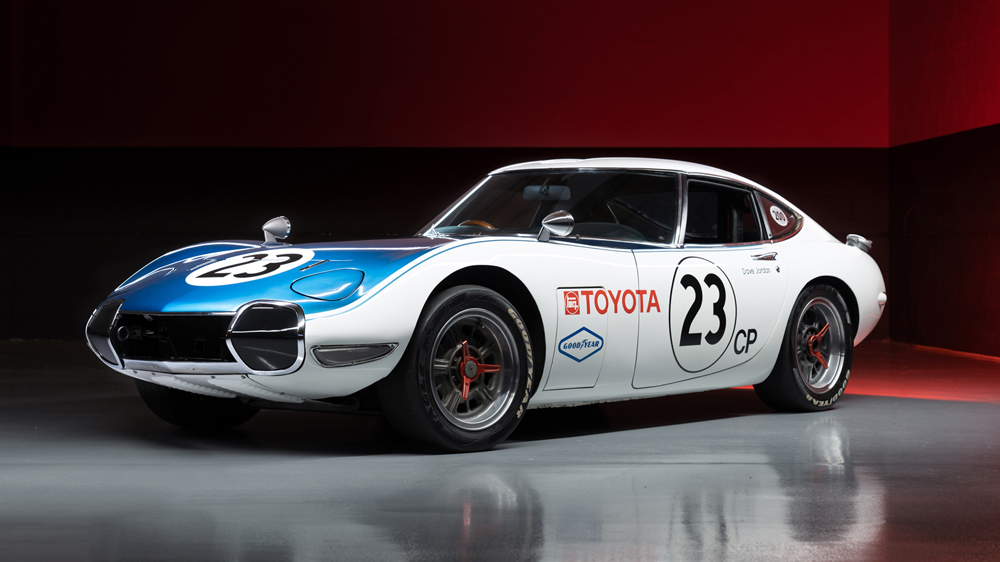 Today, the Toyota 2000 GT is regarded as one of the most significant—and beautiful—Japanese automobiles ever made. But when it came on the scene, the model was an outlier by every definition—an unexpected offering from a Japanese marque whose products, along with those of Honda and Nissan (Datsun in the US at the time), were generally regarded by stateside buyers of the era as disposable econoboxes. But those cars soon earned a reputation for reliability and quality, relative to their modest cost, and soon converted skeptics and won all three brands a place at the mass-market table. By the 21st century, Toyota would become the world’s second largest car company.

Penned by Toyota’s designer Satoru Nozaki, the 2000 GT was unveiled at the 1965 Tokyo Motor Show. Only 351 examples were made from 1967 through 1970, about 60 of which came to the US. Each was hand built under contract with Yamaha, whose own 2.0-liter, twin-cam inline-six engine powers the lightweight sports car. Developing a respectable 148 hp, the 2000 GT has a top speed of 137 mph, thanks in part to only a 0.28 coefficient of drag. Weighing just 2,469 pounds, the car comprises an aerodynamic, semi-monocoque-design steel body that’s on a backbone chassis. The result is a near-perfect 48/52 weight distribution. Also featuring a five-speed transmission, limited-slip differential, rack-and-pinion steering, independent suspension and four-wheel disc brakes, Toyota’s 2000 GT offered an ideal starting point for a winning race car at the time.

Originally finished in Solar Red and configured in right-hand drive, the vehicle soon to cross the auction block through Gooding & Company—chassis No. MF10-10001—is one of the original show cars used by Toyota Motor Sales USA to promote the 2000 GT publicly. But establishing the marque’s reputation in the US was a daunting proposition. Carroll Shelby, whose stock-in-trade was turning production cars into competitive race cars, was just the man to bring Toyota to the American motorsports scene, and by natural progression, the public eye. So, after the car’s promotional tour, Shelby and Toyota engineers made mechanical and design modifications to MF10-10001—the first serial-numbered 2000 GT built and the first of only three cars that Shelby prepared for SCCA C-Production racing.

Shelby had a lot to work with in the Toyota 2000 GT. Drop-dead-gorgeous looks notwithstanding, the model is low, compact and evenly balanced, providing one can fit into the small cabin. Actor Sean Connery was too tall for the car when starring as agent 007 in the 1967 movie You Only Live Twice, hence a one-off convertible was made for filming. It seems that most people were a little smaller then, as an attempt to pilot any Jaguar XK-E or mid-1950s Thunderbird or Corvette will remind contemporary—and perhaps more corpulent—drivers. Regardless, the Toyota 2000 GT offers an exhilarating driving experience.

Ultimately, MF10-10001 enjoyed a brief racing career, after which it was owned by several noted collectors. Its most recent owner and consignor—regarded as the foremost 2000 GT specialist—acquired the car in 1980, subsequently devoting a decade to a full restoration that returned the racer to its original 1968 SCCA configuration, including unique Shelby mechanical components and historic white-and-metallic blue racing livery. Following restoration, this 2000 GT has been exhibited at events including the Goodwood Festival of Speed and the Amelia Island Concours d’Elegance, where it won First in Class.

The race-focused and right-hand-drive-configured interior.  Photo by Josh Hway, courtesy of Gooding & Company.

For the better part of a decade, non-competition 2000 GTs have hovered around the $1 million threshold; not bad for a car that sold for $6,800 when new ($750 more than a Porsche 911). Never before offered for public sale, this first-of-a-kind and best-of-the-best example is estimated to bring between $2.75 million and $3.5 million at Gooding & Company’s Amelia Island Auction on March 4.