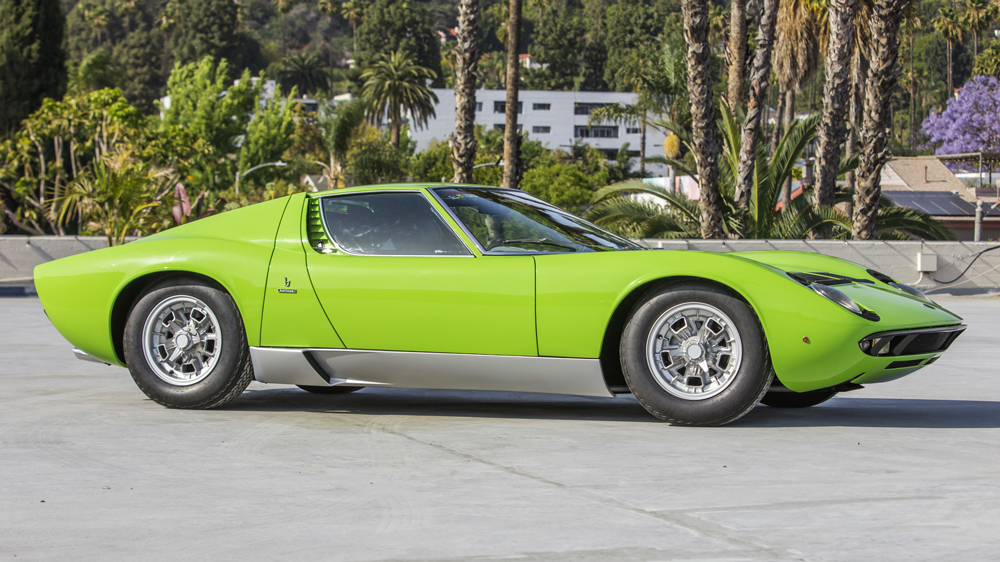 No Monterey Car Week would be complete without the auction sale of at least one Lamborghini Miura. Like a Mercedes-Benz 300 SL Gullwing or a Porsche 911 Carrera RS, a Miura transcends time, sparking the passion of enthusiasts across all generations. The Miura is even more scarce then either the Mercedes or Porsche, of which about 1,400 and 1,580 examples were built, respectively. By comparison, only 762 Miuras, comprising three production variants and a few Jotas, were made between 1966 and 1973.

The Miura appeared only two years after Lamborghini’s first model, the beautiful but conservative 350 GT, gained Lamborghini entrance into the elite V-12 club with a car whose engine and underpinnings were more sophisticated than those of its Maranello neighbor. Ferruccio Lamborghini’s first effort was a game-changer, but with the tractor tycoon’s Miura, the entire performance-car landscape was reshaped forever.

The 1969 Lamborghini Miura P400 S being offered by Bonhams at its Quail Lodge Auction in Carmel, Calif., on August 19.  Bonhams

The Miura P400 (P for posteriore, 400 a nod to the four-liter engine) was, literally, an overnight sensation. Its transversely mounted V-12 mill was situated behind the driver in a box-section chassis perforated like Swiss cheese to enhance lightness. That race-inspired chassis and drivetrain were enveloped by a stunning body designed by Marcello Gandini and fabricated by Bertone, and the result is one that seems almost ageless today. Many of us could make a strong case for the Miura being the most beautiful postwar Italian sports car of them all.

The Miura appeared only two years after Lamborghini’s first model, the beautiful but conservative 350 GT.  Bonhams

This stunning 1969 Miura P400 S will be present during Monterey Car Week, offered by Bonhams at its Quail Lodge Auction in Carmel, Calif., on August 19. Built between late 1968 and 1971, the P400 S variant is distinguished from its predecessor, the P400, by having about 20 more horses and additional creature comforts that included, for the first time in a Miura, power windows and optional air conditioning.

Its all-aluminum engine, invisible under the rear-window louvers, is a 3,929 cc, DOHC V-12 topped by four triple-choke Weber carburetors, a welcome sight visible only when the rear clamshell is raised. It makes about 360 hp at 7,700 rpm in fifth gear, good for a top speed of almost 170 mph. Its sound, at engine speeds above 4,500 rpm, is not soon forgotten.

Chassis No. 4170 retains its original engine and all of its original, numbered Bertone bodywork. Finished at the factory in Rosso Corsa (Italian racing red) over a Nero/Beige (black and tan) interior, it wears Bertone body No. 507 and engine No. 30411. It was delivered new to its first owner in La Jolla, Calif., by west-coast Lamborghini importer Bob Estes. It was soon sold to a Riverside, Calif., buyer who carefully kept the car for more than 30 years.

With about 20 more horses than the P400, the P400 S also came with additional creature comforts that included power windows and optional air conditioning.  Bonhams

Following its sale, a restoration was carried out from 2009 to 2010 by well-known San Diego specialist Bobileff Motorcar Company, when it was finished in Lamborghini-period-correct Verde Miura (a limey chartreuse) with a black interior and grey carpets. Its fourth owner (and the consignor) has since commissioned additional mechanical restoration, including an engine and drivetrain rebuild. The odometer reading of only 22,336 miles likely reflects original mileage and the careful ownership history of the car. Being offered without reserve, it is estimated to fetch as much as $2.25 million.

Click here for all of the photos of this beautifully restored 1969 Lamborghini Miura P400 S.