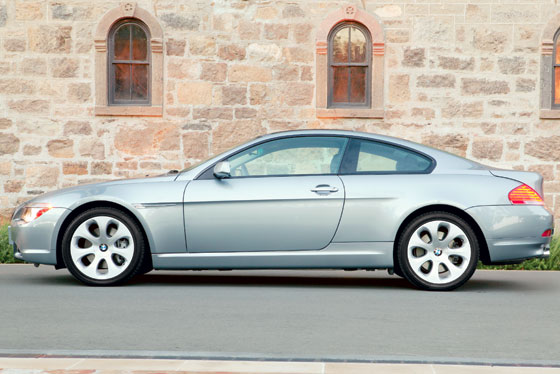 Mainstream BMWs have typically been safe, three-box designs—handsome but never sensual, clean and catchy without being really clever or truly eye-catching. The 645Ci coupe, however, exorcises all that has been BMW bland for too long and begs a standing ovation for being first-cabin, soul-deep, triple-distilled gorgeous.

Remove the roundels on the hubs and the new 6 Series’ profile could be that of an Aston Martin, a longer and broader Ferrari Scaglietti, or something roomier, larger, and conceptual from Porsche. It certainly appears smoothly aggressive and ready to make good use of its 325 horses to clobber just about anything that gets in its way. Unlike that of the 7 Series, which earned instant infamy for its snubbed trunk dragging an overloaded fanny pack, the disappearing end of the 645Ci is smooth and proportioned, and will not jar sensitive eyes. Even a visually thicker trunk lid with a slight upper lip for additional downforce is borderline radical, yet it still looks as though it belongs on this performance coupe.

The front is a total break from any BMW in the 77-year history of Bayerische Motoren Werke. The beloved kidney grilles have been replaced by vertical bars within a pair of elongated lozenges. Beneath these is an air intake stretching almost the width of the car. Turn signals appear as thick eyebrows over the headlights. But viewed from any angle, after adjusting your expectations forward, the 645Ci retains enough traditional styling cues to establish the coupe as a BMW. It fulfills the company’s pledge to evolve its cars into the 21st century by giving apparently liberal license to a styling team headed by talented but radical American designer Chris Bangle.

The 645Ci is BMW’s first 6 Series since 1989, when the equally lithe, similarly attractive 635CSi went away to make room for the ephemeral 8 Series. The modern-day Sixer follows the company’s passion for performance engineering within luxurious surroundings. Unfortunately, potential buyers may be tempted to divert their purchasing dollars to Mercedes, Audi, or Jaguar after realizing that the car’s slick, modern, and largely aluminum new skin seduces without necessarily fulfilling its promise.

The normally aspirated, 4.4-liter V-8 and the choice of transmissions and systems in the 645Ci are identical to those found at the top of the 5 Series and the bottom of the 7 Series. This means performance numbers remain just about the same for all three models, when you could reasonably expect more power and speed from the coupe, a car designed largely for sporty motoring and covering long distances at naughty velocities.

Despite a pair of purposeful tailpipes and a stock car growl that could be coming from a cast-iron, pushrod Detroit V-8, the 645Ci shows nothing spectacular when pushed. Paddle shifting is not terribly smooth, and the active steering seems to load up and become a little too heavy for comfort when maneuvering at more interesting speeds. Still, not everyone purchases a BMW to indulge Daytona International Speedway fantasies. The majority are happy tooling around in a multipurpose luxury vehicle with seats for two large people and a pair of smaller folk. Most buyers want a trunk for bags of Callaways or several cases of Bordeaux. We want to dawdle when we have to, and enliven forward motion when we want to, especially in a really good-looking car that valets will scramble to park. This, after all, has been the BMW way since the 303 and 309 two-doors of the 1930s.

“This is made for someone who wants to challenge the car, but it’s still useful as a daily driver.” —Bruce Hannay

“The 6 Series looks infinitely better in person than in pictures. On the road, it was one of the tightest-driving cars of the group, while the engine provided the 6 with enough thrust for any driving situation. The V-8 emits a dangerous and unsettling growl that you rarely hear coming from such an elegant-looking auto. Its introduction makes the coupe market, already filled with credible competitors from Maserati, Jaguar, Porsche, and Mercedes, that much deeper.”  —Fluto Shinzawa