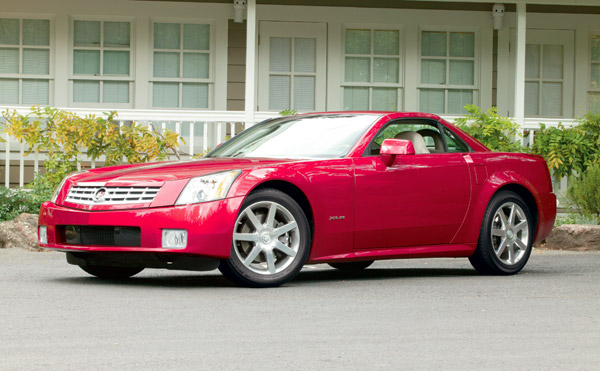 Cadillac’s stylistic renaissance, which began with the CTS sedan several years ago, continues in earnest with the stunning XLR. The new familial design vocabulary of sharp creases and broad planes—combined with plenty of swoop—works especially well on the large roadster, which may be the company’s most important design since the elegant Eldorado in 1967. The car looks terrific on Cadillac’s massive billboards above the Sunset Strip and even better on the road. (We hope that Cadillac introduces body colors that, unlike the metallic red hue on our preproduction test car, display the XLR’s superb lines to their full effect.)

Cadillac has not been shy about its intentions to take on the Germans and has aimed the XLR squarely at the Mercedes-Benz SL500. Unlike the also-ran Allante, which did not compare well with the elderly 560 SL when introduced in 1987, the XLR presents a credible, if rough-edged, challenge to the SL500’s drop-top hegemony. The 320 hp version of Cadillac’s ubiquitous 4.6-liter Northstar V-8 surpasses the SL500’s 302 horsepower, and the American powerplant has 400 fewer pounds to move.

Acceleration could not be described as blistering—Cadillac says the zero-to-60 dash takes less than six seconds, and that seems accurate—but it is more than acceptable for an open luxury tourer. (A hot rod version à la the SL55 would be welcome, and Cadillac does not deny having one in the works.) The 5-speed automatic transmission has manual capabilities but features algorithms that sense aggressive driving patterns and hold lower gears through the twists and turns, an intelligence that can render manual shifting redundant. The XLR shares its basic platform and Magnetic Ride Control with the forthcoming sixth-generation Corvette, and it feels pleasingly athletic on the road—taut without being harsh, though not as refined as some of its luxury competitors. Its structure feels stiff, and cowl shake is virtually nonexistent. The driver sits low in the car, nearly at chin level with the top of the door, and shorter drivers might find the position disconcerting. (Click image to enlarge)

Cadillac has chosen refreshingly unusual materials for its interior—eucalyptus in lieu of the more common burled woods, for instance—but the cabin still needs some fine-tuning. What was intended to be elegant instead appears sparse, which is a disappointment in Cadillac’s flagship car.

While they might seem gimmicky at first, the keyless ignition and door locks quickly become a coveted luxury. The system, which is activated by a sensor in the key fob or a card secreted in a wallet, senses a driver approaching and unlocks the door; a press on the dashboard’s start button brings the engine to life. You never have to fumble for a key.

With the impressively engineered hard top up, the XLR has space for the golf clubs. As with other hardtop convertibles, however, top-down driving relegates luggage to a small, narrow cubby at the back of the trunk that can barely accommodate an overnight bag.

The introduction of the XLR will not prompt a mass conversion of the SL faithful, but for the agnostics among us, it presents an appealing, stylish alternative.

“I’m tired of sycophantic American Europhiles bashing American cars. I applaud Cadillac for having the nerve to offer a design so fresh and uncompromising that it’s hard to believe it is a GM product.” —Robert Ross

“This is for a Corvette owner getting older and wanting to move sideways or down.”  —Bill Harlan

Return to Robb Report Car of the Year 2004