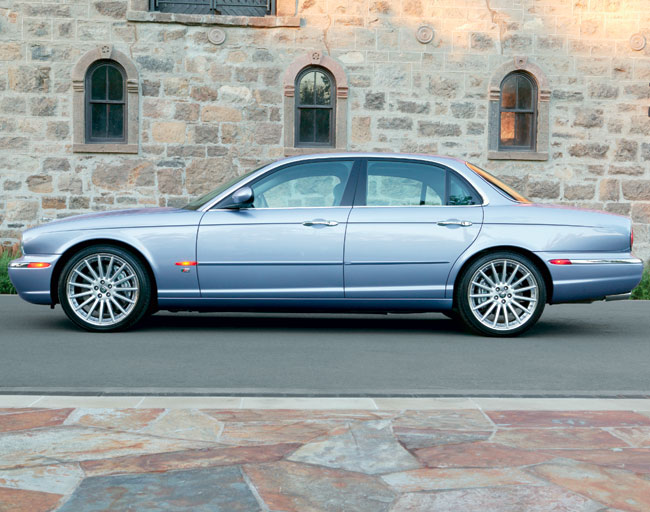 Improvements to the Jaguar XJR are so impressive that they should have made this car a serious contender. Sadly, the modifications for 2004 are not readily apparent, and so the car stands as a dowager of design: same old exquisite lines, same old peerless leathers and woods, same old engine that purrs before it pounces, and same old gentleman’s club feel that has been enchanting elitists and Anglophiles since the Jaguar Mark X of the 1960s.

Even sadder, this perception of stagnation may well follow the superb and supercharged 390 hp XJR into the marketplace, where only the most inquisitive shoppers will appreciate what Jaguar has done to get back into the executive-sedan battle against luxury opponents from Mercedes, BMW, Lexus, Infiniti, and Audi.

To delve below the traditional surface and hallmark shape of Jaguar’s veteran flagship is to recognize that the new XJR has progressed well beyond standard evolution. Under the well-established parenting of Ford, Jaguar has cast out the discomforts of earlier XJs and finally taken advantage of space-age technologies in aluminum, bonding, and riveting without shortchanging anyone interested solely in the established characteristics and traditional luxuries of Jaguar ownership.

Our contest car was the XJR, which differs only in trim (a mesh grille instead of horizontal bars), price (about $15,000 more), and performance (almost a second quicker from rest to 60 mph) from the undergraduate XJ8. More significantly, both XJs address some incessant complaints from Jaguar customers: When, went the chronic whine, will Jaguar stop building cars with trunks for only $15 worth of groceries? The new cargo hold has been enlarged to accommodate four bags of golf clubs, many dozen tubes of balls, several sweaters, and enough groceries for the entire week. Why are all Jaguar interiors sized to fit the shoulders of supermodels and the legs of jockeys? For 2004, the XJ is several inches taller, wider, and longer than its ancestors. Why does the XJ slurp gas and weigh more than a tugboat? Thanks to an all-aluminum unibody and ultralight fastenings, the car has shed more than 400 pounds and thus reduced its gas consumption. Are all Jaguar stylists pensioners living in a 1960s time warp? Remember that Porsche, with the 911, has been milking its own icon since John F. Kennedy was president.

The point is that Jaguar has improved from within—with Brembo brakes, a 6-speed transmission, an automated air suspension system, and all of today’s sophisticated traction and stability controls—without corrupting its classic exterior. The XJR has also retained its Jaguarness. This translates to a smooth ride that roars and an interior stuffed with tasteful subtleties, imbuing buyers with a sense of style, elegance, and continuing pride of ownership. In this respect, the XJR remains a car for all seasons and reasons.

“It’s sound, functional, and there are no negatives for practicality. But

Jaguar has left its identity, heritage, sense of style, soul, and sex appeal. It’s for an old person without a care for style.” —Bill Harlan

“It has the smoothest engine and transmission around, plus a posh interior. The body style is so old that it’s almost retro-looking. This is for an elderly couple taking their neighbors to dinner.” —Bruce Hannay