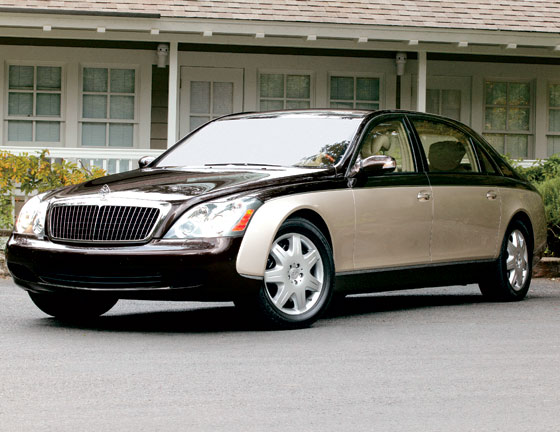 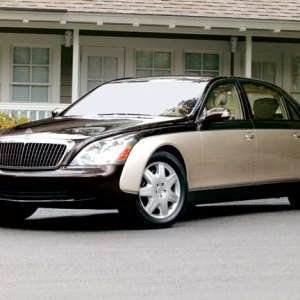 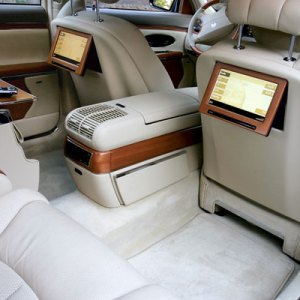 The passenger seat of the Lamborghini Gallardo is no place for a stenographer to call home. As Ron Jackson, president of Girard-Perregaux USA, rocketed the Gallardo through turns and along straights, I scribbled down his impressions of the car. “Let’s go around again,” Jackson said as he completed the circuit. “That was fun.” Not for this carsick note-taker. After another dizzying spin around the route, there was only one place I wanted to be: in the backseat of the Maybach 62.

The reborn Maybach, the result of DaimlerChrysler’s decision to take Mercedes-Benz even more upscale, shares similar traits with its early-20th-century ancestor: size, power, and opulence. While reserved in its styling, especially when compared to the unique sculpting of the Rolls-Royce Phantom, the Maybach’s mass alone gives it presence on the road and in parking lots. The 62, which is 17.2 inches longer and 290 pounds heavier than the 57, may seem too hefty to be a dynamic sprinter, but any driver will quickly realize that the 242.5-inch, 6,340-pound Maybach performs surprisingly well for a car of its girth. However, as thrilling as it may be to sit behind the steering wheel, the place to fully enjoy the 62’s wonders is in its concert hall–size rear cabin.

Robb Report Creative Director Robert Ross offered chauffeur services for our spin around St. Helena’s curvy roads, while I volunteered to lose consciousness in the back with the seat warmer and massager set at their highest levels. Editor at Large Paul Dean shared the rear, while Events Director Linda McShane claimed the passenger seat. A button mounted on the sill automatically closed my door so I would not have to reach for the handle, and Ross, after making sure we were comfortable—a rhetorical question to ask any passenger in this car—got the Maybach rolling. “This thing is like a hook and ladder,” Dean observed. “I feel like I should be driving the back end.”

The 62 includes an endless number of gizmos—DVD player, refrigerator, ambient lighting system—that makes it a technological marvel. The stunning interior is a contrast to the subdued exterior, as an array of woods, leathers, and hides surrounds the numerous buttons and switches that control the car’s gadgetry. But space, an often overlooked commodity, is what makes the Maybach unique; Ross and McShane seemed to be sitting in another ZIP code. Even with my seat fully reclined, like those in some first-class airline cabins, my feet did not touch the LCD screen mounted into the back of the passenger throne.

Ross stomped on the accelerator, drove the 62 deep into each corner, and braked hard at every opportunity, asking much of the 5.5-liter engine and the car’s air suspension system. The car performed every task without a whimper, never once threatening to upset the stomach of its backseat passenger. Riding in the Maybach was such a relaxing experience, with its soft seat, aesthetically pleasing fit and finish, and pillowlike ride, that my queasiness gave way to drowsiness.

At the conclusion of our cruise, Ross deemed the car a smash hit to drive. But I know that I got the better of the deal.

“This is not for a car guy. It’s for someone who prefers to be chauffeured. It has no soul. It’s a car without any emotion. It’s an important car, but it’s not for me.” —Herb Harris

“The Maybach is an opulent,indulgent, luxuriously over-the-top, single-purpose limousine and an example of damn-the-expense decadence that hasn’t been seen since the Bugatti Royales.” —Paul Dean