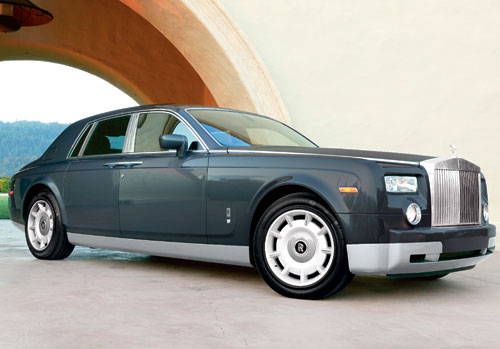 When BMW assumed ownership of Rolls-Royce Motor Cars, many loyalists despaired that the heritage-laden British marque would soon sprechen Deutsch. The Bavarian firm has taken pains, however, to ensure that the unapologetic luxury in the Phantom, its first new Rolls-Royce offering, speaks the Queen’s English with a satisfyingly plummy accent. In the same way that BMW oversaw development of the most splendid Range Rover ever (before selling that company to Ford), it has remained true to Crewe’s principles and given us the finest Rolls-Royce in decades.

Dormant for more than 10 years, the name Phantom has a lengthy and varied provenance in Rolls-Royce history. During the 1920s and 1930s, Phantom chassis carried a wide range of coachbuilt bodies—including coupes, convertibles, and limousines—and it was just as likely that a Phantom would be driven by its owner as by a chauffeur. The Phantom’s fourth iteration, which was introduced in 1950, moved solidly into limousine territory. A total of only 18 examples were produced for the likes of Queen Elizabeth II, the Aga Khan, and Generalissimo Franco, who ordered three. Unlike the Phantom IV, which was sold only to royalty and heads of state, the subsequent Phantom V and Phantom VI, produced between 1959 and 1991, were offered to the general, albeit wealthy, public. Almost all were delivered with limousine coachwork.

A spiritual descendant of its earlier namesakes, the new Phantom is large enough to be used as a limousine but manageable for an owner-driver. Its design, however, references not an earlier Phantom but the Silver Wraiths of the 1950s, the finest Rolls-Royces available to mere mortals during the Phantom IV’s ascendancy. Coachbuilders H.J. Mulliner, James Young, and Hooper were among those that designed formal sedan bodies with sweeping fenders, bustled trunks, and thick rear pillars for the Silver Wraith, and these precedents are clearly visible in the Phantom’s lines. It does not exhibit the elegance of the old Silver Wraiths, yet it cannot be mistaken for anything but a Rolls-Royce.

The Phantom’s interior remains firmly bound to Rolls-Royce tradition, right down to the slender black steering wheel and the electrically assisted gear selector. You sit upon—rather than in—the firm but comfortable seats, and the high seating position with a view over the long hood and past the Flying Lady mascot is reminiscent of 1950s Rollers. An Art Deco–flavored dashboard presents an uncluttered assemblage of surfaces faced in high-quality veneers, metals, and leather that disguise monitors and controls that are not in use. Strange ergonomics seem to defy Teutonic logic almost intentionally; the bizarre seat controls combine buttons and a toggle, for instance, and are hidden beneath the center armrest/console. The arrangement could very well have been devised by H.J. Mulliner or Hooper decades ago, and not by a modern manufacturer.

Acceleration provided by the 453 hp, 12-cylinder engine comes on swiftly but not dramatically. Entering a corner at a clip induces lean from the tall Phantom, but handling remains surefooted. Although it does not encourage aggressive driving, the car is far more capable than might be expected. The ride is pure Rolls-Royce, smooth and unruffled, and this car is supremely quiet at speed. There is no mistaking this uniquely pleasurable driving experience for any other. If only it were a little prettier.

“What an incredible automobile. There’s a lot of careful thought in this.

It meets your historic expectations right away. It pushes every button I wanted Rolls-Royce to push, then it showed me more. You could own this car without ever driving it and be satisfied with it. I wish I had a couple more days to drive this. I’m in love with it. This is actually a car I would buy. I would arrive at work in such a good mood.”  —Herb Harris

“The Phantom was the most pleasant surprise out of the bunch. I thought the car’s performance would be commensurate with its styling: mediocre. But the Phantom was one of the most dynamic drivers of the day. As a car to drive, the Phantom clearly trumps the Maybach. That a vehicle so big and bulky can scoot so quickly and quietly is amazing. And startling.”  —Fluto Shinzawa