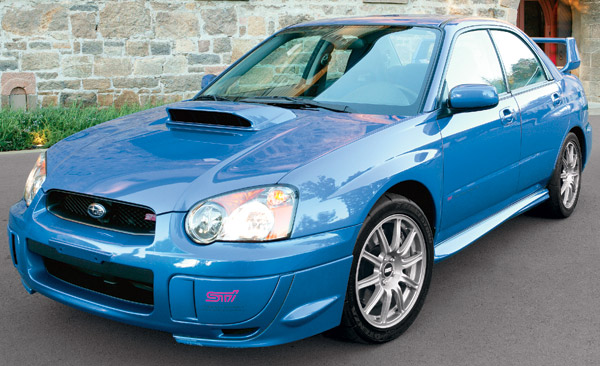 The number of smiles the Impreza WRX STi inspires is inversely proportionate to the amount of dollars that Subaru is asking for its purchase. In terms of performance versus its 11 “Car of the Year” competitors, the Subaru stands unchallenged when delivering bang—in this case, a seriously turbocharged fourbanger—for the buck. Consider the Audi RS6, a similar four-door sport sedan that faced off against the Subaru in the competition. The STi not only reaches 60 mph from standstill in exactly the same time as the 450 hp Audi, but the Subaru also comes at a $50,000 discount.

The four-door STi is a street-tuned version of Subaru’s World Rally Championship machines, cars that are built specifically to go fast in any conditions. Other racecars, most of which bear no resemblance to production models, compete mostly on ice-smooth tracks under sunny skies. Rally cars, on the other hand, race through muck and in rain and hail, blitzing through corners in environments that would make other vehicles scurry for the warmest paddock.

The STi’s pedigree ensures that the 300 hp screamer delivers a thorough jolt when taken to the street. If there were a car that consumed double espressos instead of unleaded, the STi would be that highly caffeinated machine. Subaru Tecnica International, the high-performance motorsports arm of Fuji Heavy Industries, Subaru’s parent company, shoehorned so much power into the compact 2.5-liter block that the frenetic STi, regardless of its speed, feels like a catapult poised to be unleashed.

Owners of luxury automobiles may blanch at the STi’s raw performance as well as its unrestrained and unrefined styling, which includes a cavernous hood scoop and a boy-racer rear spoiler. Inside the spare cabin, Subaru chose not to include a radio in the base model, arguing that its absence reduces the weight of the car and improves its performance. And forget about amenities such as heated seats or a navigation system.

However, for enthusiasts seeking the essence of spirited driving, the STi makes good on any request. A heavy clutch, short throws, and small steering wheel devoid of buttons and switches all translate to aggressive operation. For performance-oriented drivers, the sound of a car can be just as significant as its drive, and on this count the STi does not disappoint. The engine thrums at idle, growls under acceleration, and emits a piercing whine when the turbo kicks in.

The STi’s power mandates two-handed driving; 300 horses crammed into a 4-cylinder  engine guarantee a bout with torque steer. However, its all-wheel-drive system makes the STi safe and easy to drive with proper attention. Toss the car into a corner, and it breezes through the turn without a whisper from its Bridgestones. On straightaways, the STi rides stiff but true, while a pass in sixth gear is effortless.

A freshly licensed teenager would receive no argument from Mom and Dad that a four-door, all-wheel-drive Subaru is a sensible choice for a first car. Swift-thinking parents, however, would know not to relinquish the STi keys to the kids. This car is too much fun to share.

“I bought my first car in 1972. It was a BMW 1600, because my dad thought I’d kill myself in the Sunbeam Tiger that I really wanted. I learned how to drive in that little red box, and whatever power it gave up to the Tiger’s V-8 was more than made up for by its handling and agility. Kids these days have the best of both worlds with cars like the Subaru, provided they can afford one. This is a legitimate race/rally car for the street, one that delivers as much seat-of-the-pants fun as any car I can think of. My passenger (and employer) joined me for a spin and remained quiet for the entire ride. By the time we came to a stop, I noticed he had pried off one end of his grab handle.”  —Robert Ross

“There’s an unbelievable thrill you get with that car. It feels like you’re