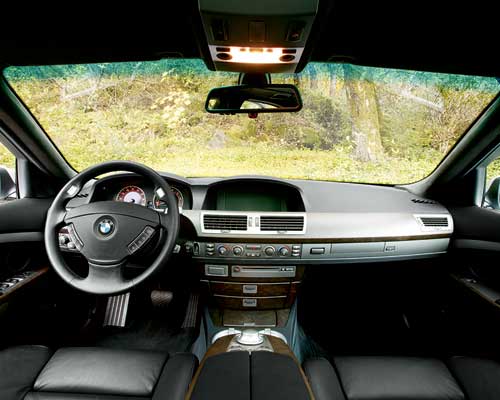 From the outset, I was impressed with the appearance of BMW’s new-Bangled 7 Series sedan. Its unconventional lines seem to reflect the spirit of designs produced by Italy’s carrozzerias in the 1950s and 1960s—Frua’s Maserati Quattroporte in 1963, for instance—which were dramatically sculpted but not necessarily pretty. BMW’s new design vocabulary has raised the eyebrows of most critics, and my positive opinion of design chief Chris Bangle’s styling continues to place me in the minority. But time has generally mellowed the strongest objections to the shape of the 7 Series, and the big Bavarians have become nearly ubiquitous wherever luxury sedans congregate.

The new 760i—a short-wheelbase variant of the 12-cylinder model—marks the first time that BMW has offered such a configuration in the United States. BMW says the sedan, equipped with a 438 hp, 6-liter V-12, will reach 60 mph in 5.4 seconds. The car feels quick off the line rather than fast, but once it is under way, power is abundant. Only a few discreet V-12 badges and the 760i nomenclature emblazoned on the trunk announce what is under the hood, which will be appreciated by those who prefer stealth speed. The handling characteristics for which BMW has been lauded are present, and hustling around the bends of Napa Valley’s back lanes proved a satisfying experience. The 760i’s heft—it weighs nearly 5,000 pounds—prevents sports car–style maneuvers, but the shorter wheelbase helps to mitigate the bulk, as do the factory-equipped 20-inch wheels. The latter have an aftermarket appearance and deliver the sportier feel associated with customized accessories: sharper handling and its nearly omnipresent partner, a stiffer ride. In the same way that the Bentley Arnage T is a posh car with a little rumble, the 760i serves up its luxury with an edge.

However, BMW may have succumbed to the mania for gadgetry.

Participants in our Car of the Year event liked the car’s performance but were not so taken with its dashboard wizardry. There is, of course, the infuriating iDrive, which overcomplicates basic functions by burying them under layers of on-screen menus controlled by a large knob mounted at the front of the driver’s armrest. A simple button on the console would do. Operating the controls for the seats is an equally counter-intuitive process. You press a button representing the area of the seat that you want to adjust and then use a toggle to make the changes; the controls have been placed to the right of the driver’s legs, where they can hardly be seen. And then there is the gear selector, demoted to a column-mounted stalk barely larger than the one that controls the windshield wipers. Press up for reverse, down for drive, and in for park. None of these features presents an impediment to driving, but without a compelling reason for doing so, each trades the familiar for something that must be learned. And that is regrettable, because the 760i is otherwise a terrific car.