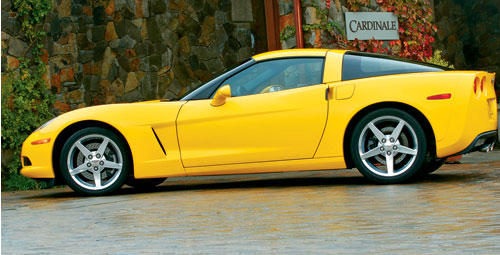 Commonly referred to as the C6, the sixth-generation Corvette had been the subject of much speculation over the last few years. ’Vette enthusiasts may not be as fanatical in their devotion as those who worship at the altar of Porsche, but they have strong opinions nevertheless regarding the evolution of the American sports car. Even the new model’s exposed headlights—the first on a Corvette since 1962—generated concern. The car’s body has otherwise followed an evolution similar to the 911’s: clearly new yet obviously the offspring of the previous generation. Consensus considers the design worthy of praise.

The Corvette’s 6-liter V-8 produces 400 hp—matching the outgoing Z06’s power rating—and is wonderfully American, full of grunt and swagger. (The new Z06, due to arrive late in the year, will achieve 500 hp.) Pressing the gas pedal to the floor creates forward momentum so visceral that it feels almost as if a jet pack is strapped to the back of the seat. The effect is more polished than in the Dodge Viper, but plenty of muscle car aura remains, enhanced by a throaty exhaust note. Chevrolet claims a zero-to-60 time in the low four seconds, and that seems accurate. (Our car at Napa came equipped with an automatic transmission; with a manual it certainly would have been even more entertaining.) The Corvette handles ably, at once solid and capable of being tossed through the curves. And in an era when conserving gasoline is more than just an economic concern, the Corvette can claim highway mileage ratings on par with family sedans—as long as it is driven like a family sedan.

Corvette loyalists will feel at home in the cockpit, sitting low to the ground and looking out over the long nose, just as they always have. Newcomers to the experience will appreciate the understated, gimmick-free interior design that is in line with the C6’s European competition. The so-called heads-up display projects pertinent speed and rpm information onto the windshield in front of the driver, with fun extras such as the g’s that you are pulling through a turn. Drivers with affection for analog gauges may balk at the system, but others will appreciate that with the heads-up display in place, their eyes need never leave the road.

That this car has a starting price of less than $45,000 is astounding. And although it excels as a performance automobile, the Corvette offers the added advantage of reliable, everyday transportation. It can be serviced at any Chevrolet dealership, and you can drive it long distances without the likelihood of your seeing a Check Engine light and calling for a flatbed to bring the car home. Its practicality might hinder the C6’s acceptance among enthusiasts of high-end sports cars, but those drivers will miss out on one hell of a ride and an incomparable bargain.