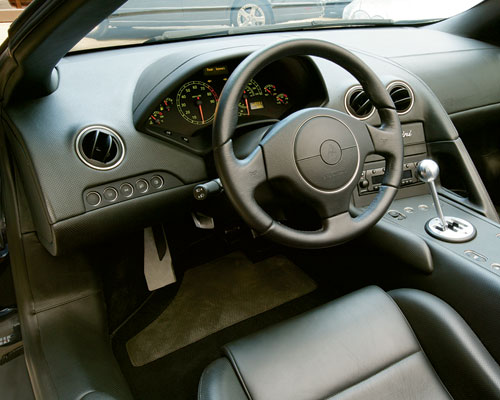 My favorite modern Lamborghini is the Gallardo. In fact, it is my favorite sports car, period, for reasons elucidated in last year’s Car of the Year issue. That said, the Murciélago Roadster leaves me longing for a car (like the Gallardo) that is friendlier and less flagrant. Perhaps it is unhealthy perfectionism and impatience born of age that leave me with little to effuse about when dissecting the Roadster in the unforgiving light of the real world. If the car’s reason for being is sheer audacity, it has achieved that goal. In a showroom or in a courtyard, the shape is otherworldly; it will be the center of attention in any valet parking lot. But for anything other than sunny days with lots of open road ahead (sans radar traps), the Murci is less suitable than the coupe from which it evolved.

Fundamentally, both the coupe and convertible versions of the Murciélago are identical, save for the striking design alterations to the Roadster from the waist on up and the attendant structural modifications. But where the coupe’s shape is fluid and harmonious, the Roadster’s is fractured and difficult to interpret as a complete form (as is the case with nearly every convertible derived from a beautiful coupe). The continuity of its profile is interrupted by the absence of a top, which, when in place, transmogrifies the Lamborghini into a silly creature indeed. The fabric contraption is as ill-fitting as the worst toupee, and it requires an engineering degree from MIT to install. Perhaps Lamborghini should have consulted with a Lotus Elise focus group during that portion of the design phase.

Of course, no one will drive this car in inclement weather. Rather, it will be used only as a fair-weather pleasure device, pure and simple. Except that this Murciélago is far from simple. Its drivetrain is complex, with full-time four-wheel drive, an elaborate suspension, and a host of computer-controlled assists and watchdogs. Lamborghini’s optional electronic e-Gear transmission was absent on our test car, which was instead equipped with a good old-fashioned 6-speed gated shifter topped with a metal eight ball right out of a high school machine shop. It feels perfect. Clutch effort is Herculean, and shifting—like the recoil of a big-bore automatic handgun—is indelicate but satisfying.

Ultimately, the essence of the Murciélago Roadster is its engine, heard all the more clearly from an open cockpit. That engine is my pick as the world’s most exciting and capable V-12. Consider it a 6.2-liter symphony orchestra positioned directly behind two of the luckiest people in the world. To rev up the monster to 7,500 rpm is to hear the heavenly host on song. To do so repeatedly is to risk hearing impairment and incarceration. It’s all a balancing act, one accomplished better by the plain vanilla Murciélago than by its flamboyant Roadster relative.