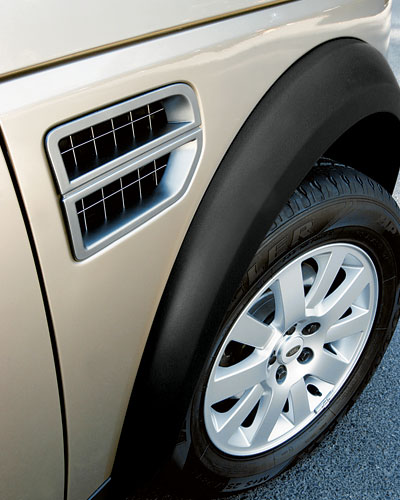 Not long ago, Land Rover—with its Range Rover and Discovery—held a monopoly on the luxury SUV market. Then Lexus joined the fray in 1996, and before long the competition also included entries from Acura, BMW, Cadillac, Hummer, Infiniti, Lincoln, Mercedes-Benz, Porsche, and Volvo. In this crowded field, the elderly Discovery’s deficiencies have become increasingly apparent, necessitating Land Rover to conceive of a stellar replacement to remain in the hunt. It has just that in the LR3.

The LR3 is a completely new car, right down to the 4.4-liter V-8 derived from a Jaguar design and good for 300 hp. It is no barnstormer, but the LR3’s acceleration is class-competitive, and the vehicle never feels underpowered. The car’s real technological jewel is its new and much-touted Terrain Response system. Selecting one of its five programs—designed for conditions as diverse as sand, snow, and rock crawling—will adjust the car’s relevant systems to respond ideally to each situation. It operates brilliantly, eliminating, for example, even the hint of wheel spin under any condition.

The LR3’s on-road performance is nearly as polished as the Range Rover’s, with a supple ride and accurate, responsive steering. Although our Car of the Year participants expressed reservations about its handling capabilities—a perception that is understandable when the SUV is compared with the world’s finest sports cars and sedans—the LR3’s handling is, in fact, exceptional by the standards of its class.

The LR3’s simple, handsome lines should hold up well, but some in Napa lamented that its lower-body cladding bore an unfortunate resemblance to that on the Honda Element. On balance, though, it looks good on the road and boasts excellent proportions that cause it to appear smaller than it actually is.

Land Rover is justifiably proud of the LR3’s interior packaging. The designers went so far as to reconfigure the rear axle to create roomier third-row seating. Although the rear row is perhaps not as comfortable as the forward row, passengers will not feel penalized back there except during ingress and egress, as long as they are shorter than 6 feet. Both the second- and third-row seats collapse completely to create a vast cargo area. The airy cabin also benefits from multiple sunroofs.

The introduction of the LR3 should not lead to any sibling rivalry with the Range Rover. The two vehicles are entirely different animals, with the former stressing utility and the latter elegance. Those with the Range Rover on their short list will also be looking at luxury sedans such as the Mercedes-Benz S500 and the Jaguar XJR, while an LR3 buyer will measure it against corporate cousins from Volvo and Lincoln and other SUVs. They will find that the LR3 compares favorably.